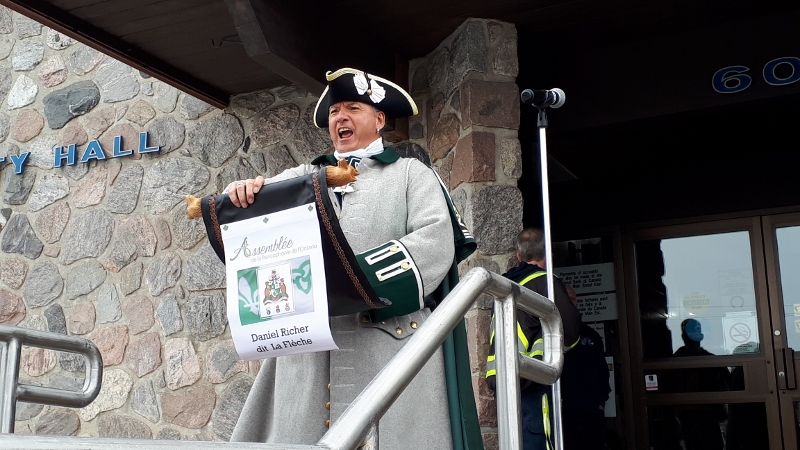 Hear-ye! Hear-ye! Crier Daniel Richer announces the Franco-Ontarien Manifesto demanding a reversal of provincial cuts from the steps of Hawkesbury town hall. The Hawkesbury announcement was part of a series taking place in towns and cities across Ontario. Photo: James Morgan

The cry went out from the steps of Hawkesbury town hall on Thursday afternoon.  Daniel Richer, the costumed official crier of the Assemblée de la francophonie de l’Ontario (AFO) read a manifesto in defense of Franco-Ontarien heritage and demanding Premier Doug Ford re-instate a separate office of the French-Language Services Commissioner and funding for the French-language university campus.  “Standing against new threats to our fragility!, Standing against an adversary we know well!” shouted Richer, who carried on to highlight the centuries of francophone presence in Ontario and the diversity of francophones who have immigrated to the province.

About 65 people showed up for the demonstration.

“The Université de l’Ontario français is a debt we are owed!” proclaimed AFO President Carol Jolin.

His speech was filled with words like “resistance” to describe the political situation of Franco-Ontariens.

Jolin later explained that the crier’s tour, which is visiting seven towns and cities across Ontario, was entirely funded by donations by supporters of the AFO.  The tour is part of the AFO’s observation of March as Francophonie Month.

He also emphasized the need for solidarity among francophone groups across Canada and hopes to eventually meet with Ontario Francophone Affairs Minister Caroline Mulroney to discuss the concerns AFO has with government policies. 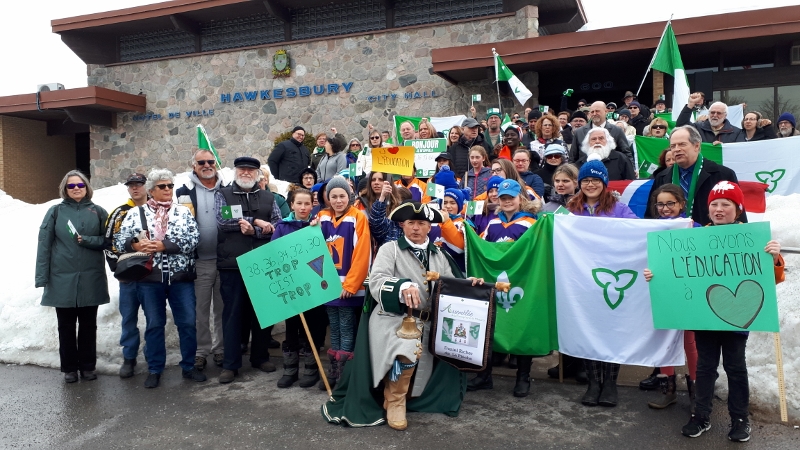 About 65 people gathered outside the Hawkesbury town hall to hear crier Daniel Richer read the manifesto. They assembled for a group photo after. Richer is in the front row, wearing an elaborately decorated costume and three-cornered hat. Photo: James Morgan