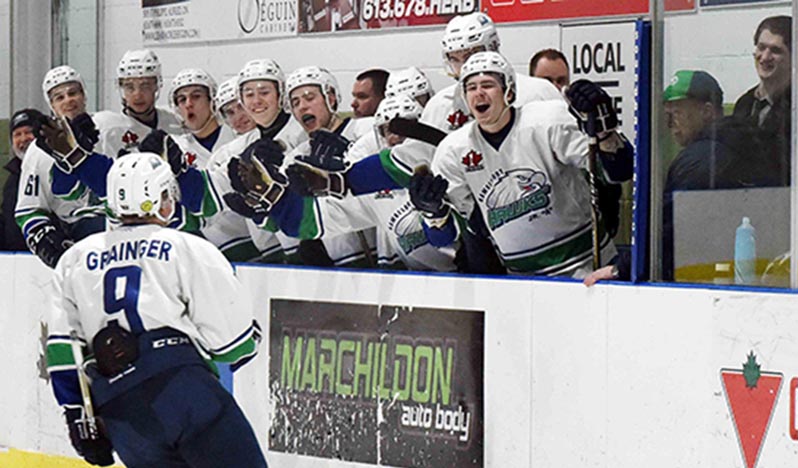 The Hawkesbury Junior “A” Hawks played .500 hockey over the weekend, skating to a win and a loss in back-to-back home contests.

The Hawks opened the weekend against the Yzerman Division-leading Ottawa Junior Senators. Ottawa would open the scoring with two goals before the halfway point of the first. Hawkesbury would respond with a goal from Matthew Titus but Ottawa would add another before the end of the period to take a 3-1 lead into the second. Hawkesbury would keep the game within reach through a scoreless second period; however, Ottawa would put assert control in third, potting two more goals to take the game by a final score of 5-1. Bradley Shaw and Nicholas Elia each had an assist in the loss.

The next night, the Hawks looked to rebound against the visiting Brockville Braves. Unfortunately for the Hawks, they would once again find themselves down by two goals before the halfway mark of the first. But this time Hawkesbury would respond, scoring three straight goals to take the lead 3-2 early in the second. The game would go back and forth from there, with Brockville twice coming back to answer Hawkesbury leads. Tied at 4-4 in the third, Yanic Crete would break the deadlock with the eventual game-winner for a 5-4 final in the Hawks’ favour. Matthew Petizian would stop 36 shots in net, while Crete (2g), Azzaro Tinling (1g, 1a), and Jaxon Camp (2a) would put up two points apiece in the victory.

The Hawks return to action on Wednesday, February 13 when they visit the Rockland Nationals.