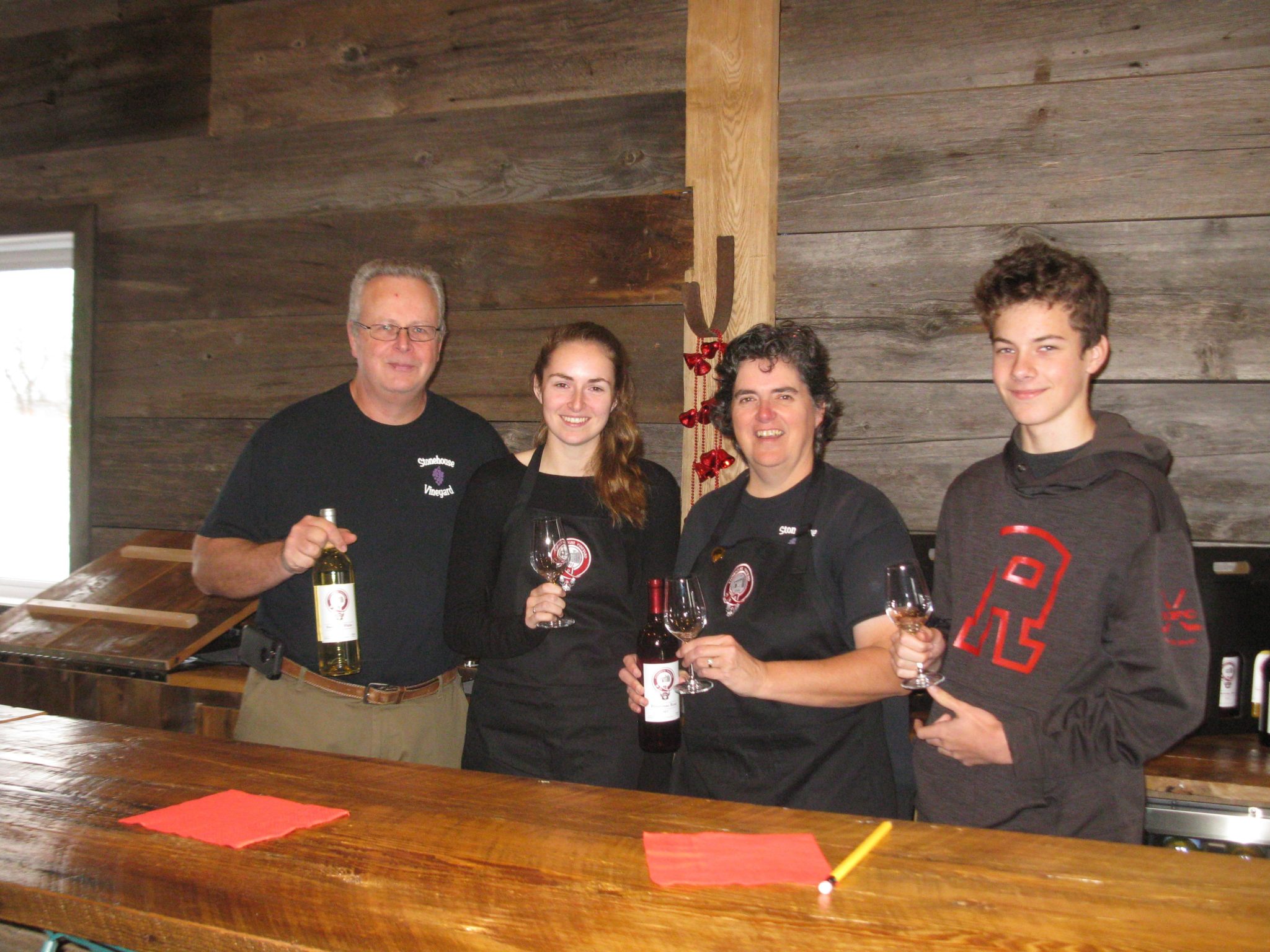 Craig MacMillan is the eighth generation of the MacMillan family to own the land at Stonehouse Vineyard near Lochiel. One might wonder what the MacMillan ancestors, Scots and perhaps Presbyterian teetotallers who settled there in 1793, would think of the crops their descendants are growing.

But given the MacMillan family’s dedication to their heritage home and the land, along with the quality of the wines they are producing, their ancestors would probably approve. This new winery is truly a family affair, involving Craig, his wife Joanne and their two children Lindsey, age 20, and Ewen Roy, age 15. The farm was owned by someone outside the family when Craig and Joanne purchased it in 2008, with a view to establishing a winery that they would devote themselves to full-time once they retired.

“There were already experimental grapes being grown on the 100-acre farm, about 30 plants,” Craig notes. The MacMillans learned all they could about cold-climate grapes. In 2012, they planted their first acre of plants and by 2014, they had five acres under cultivation. They currently have another five acres ready to plant.  The work is labour-intensive, with all the planting, pruning, clearing and harvesting done by hand by the four of them.

“That’s where having the youth and energy of two teenagers comes in handy,” Craig adds.

The MacMillans’ knowledge of wine-making is largely self-taught. Always interested in wine, they visited vineyards in Nova Scotia, Ontario and British Columbia, and through work travels, went to vineyards in France and several U.S. states, including California. They did a lot of research and completed online courses on viticulture and winemaking.  Joanne is a graduate of the Sommelier program at Algonquin College in Ottawa. All members of the family have learned a lot in the last 10 years.

“We’ve also relied on the knowledge and experience of others in the wine industry,” Craig says.

The winery itself is located in in a beautiful retrofitted timber and beam barn found on the property and reset upon a new foundation. The building renovation began in 2016 and was put into operation in 2018, following the installation of the extensive equipment needed to process, age, bottle and label the wine. A large loft on the second floor is ideal for future tastings and other events. In addition to restoring the stone house, built in the early 1800s, they have also built a 40 x 60-foot shop on the property.

The MacMillans held what they called a ‘soft opening’ over the 2018 holiday season, inviting the public to sample and buy the four wines that are now ready. They include two whites, a Frontenac Blanc 2017 and a Swenson White 2016, both dry medium-bodied wines. Their Frontenac Noir Rosé 2017 is a medium light rosé, darker than most rosés but crisp and refreshing. Rounding out their initial offering is 1793 Fortified 2017 wine, a mellow wine that would pair well with dessert or cheese.

A grand opening of the winery is planned for the spring of 2019, when the family will introduce its red wines. When asked about future plans, Craig says, “We are interested in agri-tourism, hosting tastings, private weddings, private and community events. We want to tie in the history of the property and emphasize the area’s Celtic roots. We plan to work with other groups in the community to fulfil this vision. ”

Stonehouse Vineyards is a member of the Eastern Ontario Wine Producers Association, which has 11 members. “Our dream is to see this region become as popular as Niagara or Prince Edward County,” Craig says.

To make an appointment to visit Stonehouse Vineyard or to view what they have on offer, go to www.stonehousevineyard.ca.