When will Highway 34 re-open? No one will say, but, “As soon as possible”, according to contractor 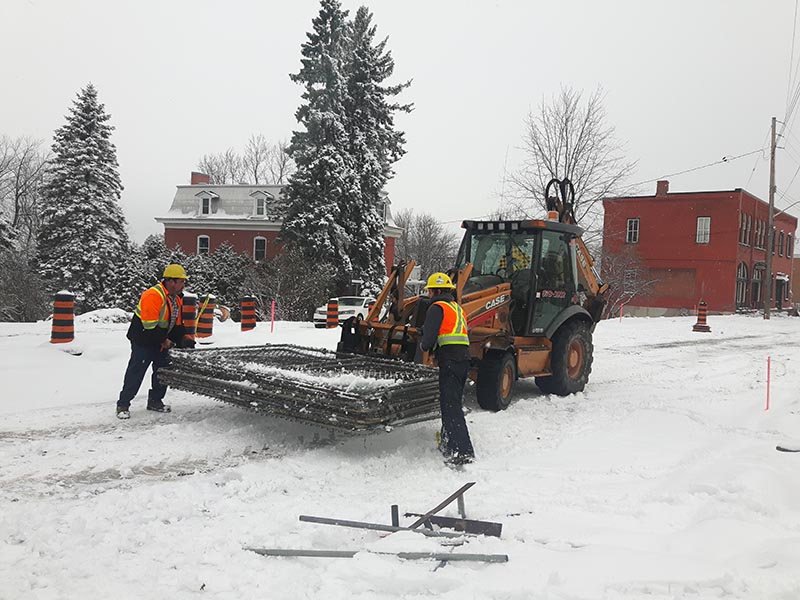 Construction workers were removing some of the fencing which had separated the street from the pedestrian area on November 13, 2018.

The frustration associated with a construction project gone way past deadline is mounting. At Champlain Township’s November 13 council meeting, council learned that a Wednesday morning site meeting had been scheduled with the contractor.

Champlain Public Works director James McMahon told council that all connections to the new water line were supposed to be completed by the end of the following week (November 23).

“We want people to know that we have met with the contractor and we have flat out said that we are not pleased with the way things are going. I know it’s tough work, but . . . last night (November 12) I saw that they were out digging again at the main corner — there was a broken sewer line at the corner and they had to go back in. I know they are working around gas lines, water lines and sewer lines. But I’m not making excuses for this. Our merchants are suffering and our residents are suffering,” said Barton.

“We have businesses like Pink Bow Tie, for example where for quite a while, it was almost impossible to get in to that business,” Barton said.

Vankleek Hill councillor Paul Emile Duval asked if there was going to be any reductions in residents’ water bills for those affected by the construction.

McMahon replied that there had been no issues with water bills and that where water had to be left running, that was happening before the meter so that residents were not paying for extra water consumption.

“I think what Mr. Duval meant is that maybe we should have some consideration for them,” said Barton.

“I do want taxpayers to know that the overtime and extra work is not being paid for by the township. If they are running overtime and have to bring in extra people, that is their cost, not ours,” Barton said.

“The original option had been to keep one lane open all along the street during the construction, but we were told the work would get done faster if we closed Main to Mill completely for three weeks,” said Barton, adding that it has now been seven weeks that the Main Street-to-Mill Street section of High Street has been closed. (November 19, 2018 marks the beginning of week eight of the closure).

In addition to the High Street closure headaches has been the added frustration of the temporary, above-ground water lines freezing since winter temperatures have set in.

The project was supposed to be completed by mid-November, according to a notice posted on the Highway 34 Construction Facebook page and on Champlain Township’s website late last week. A statement from the contractor says, “. . . it is quite apparent that this completion date will not be met as much work remains to be done.”

Some of the work which was supposed to be completed this year has been deferred until next year, including the closure of Methot Street where it meets High Street and a third “lift” of paving. A first layer of paving of some parts of High Street began last week. The aim is to do two layers, or “lifts” before winter sets in and then to do a third and final lift next year.

Duval asked how cold it could be for paving to happen. McMahon said that he has done a base coat of paving a minus-8 and that it could be done at minus-10.

“That’s not the final coat,” says McMahon. But if it doesn’t take right and it has to be ripped up next year, that will be at their cost,” said McMahon, who also mentioned putting asphalt down on sidewalk areas if the contractor does not get the sidewalks and curbs done this year.

The contractor’s notice also points out that the asphalt and sidewalks on High Street between Wall Street and Methot Street were not removed. That section of road, along with any other remaining work, will be completed in 2019.

The contractor’s statement goes on to say that the underground water services installation for properties on the west side of High Street between Wall Street and Russell Street has been completed. But pressure testing, chlorination and bacteriological testing of the water main and services have yet to be done; results are expected to be reviewed this week. If the test results are acceptable, the precautionary boil-water advisory will be lifted and the township will deliver a letter to all the residents in the affected area advising them of this.

Even with taps left open to allow the water to run, there have been many instances of frozen pipes for residents along High Street. If you are experiencing such an emergency, you can call 613-932-6571 if you have issues with your temporary potable water supply.

During the November 13 council meeting question period, The Review asked council when Highway 34 would be open again.

“We do not know,” replied the mayor and the contractor’s letter, posted late last week, likewise says only that the Highway 34 connecting link will be open “as soon as possible.”

Business owners in the affected area have complained about the inaccessibility to their businesses during the construction period and that pathways along the streets were almost impassable. Some businesses have experienced reductions of up to 50 per cent due to the lengthy street closure.

The general contractor for the project is Cornwall Gravel Company Limited.