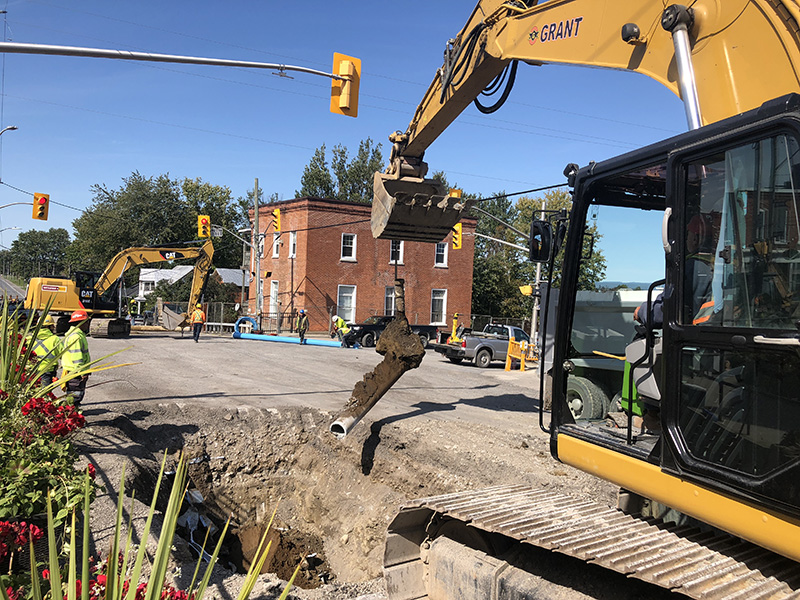 We asked municipal engineer François Lafleur for an update on the Highway 34 construction work. Residents in the vicinity of Vankleek Hill’s main intersection had their water turned off on Monday, but water will be turned off again in the coming weeks, when it is time to connect the new watermains to the pipes, he says.
The work scheduled during Monday’s water shutdown was completed successfully. That work consisted of “cutting and capping” the existing watermains at three locations (Main Street East, Main Street West and High Street near Methot Street, to allow for the reconstruction of the watermain between those locations. The work includes replacing all of the township’s underground infrastructure within the intersection, as most of it was installed in the 60’s and 70’s and is nearing the end of its service life. This includes replacing two sections of sanitary forcemain (pumped sewer lines) within the intersection; replacing the watermain along Main Street East/West, and along High St; connecting the new storm sewer to the storm sewer that was installed a few years ago on High St (on the north side of Main Street) and installing new gravel for the road. It is an additional challenge to work in the area as there is a large amount of other underground lines that the contractor will have to work around, such as natural gas, traffic light wiring, emergency generator wiring (to the sanitary pumping stations), and cable/bell lines. The contractor will also try to complete as much work as possible on High Street in the proximity of the intersection, to minimize traffic disruptions when Highway 34 does reopen. Lafleur is project manager for the multi-million dollar project, working for EVB Engineering.

Most of the $3-million project is funded by the province of Ontario, but the cost of water main replacement and repairs to the existing sanitary sewer will be picked up by Champlain Township. The Ministry of Transportation (MTO) will pay for storm sewer work as part of the reconstruction.

Work has sped up in the past few weeks. A lot of remaining works (concrete and asphalt) are weather-dependent, however, so it is still too early to talk about the expected completion date, The Review was told last week. Concrete work was expected to begin this week (the week of September 24).

Many residents are connected to a temporary, above-ground water supply. It is possible that water pressure at homes may be slightly lower than usual. In some cases, supply issues were caused by unauthorized valve closures and were rectified as soon as possible.
PHOTO: TRAVIS DESJARDINS