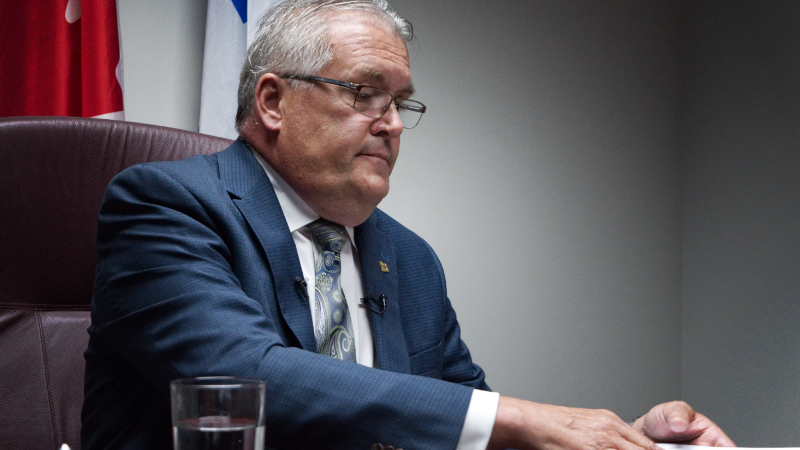 It’s been a hectic year for Argenteuil MNA Yves St-Denis.

With an election on the horizon, St-Denis hosted an intimate press conference on the afternoon of June 19, 2018, giving a statement highlighting recent accomplishments, upcoming projects and, of course, his decision concerning the future of his political career to journalists.

St-Denis started by listing objectives he had set for himself at the start of his four-year term, including high-speed internet (the first users should have access in 2019) and the creation of a social paediatric medicine centre in a low-income area.

Two major upcoming projects include the construction of a CHSLD (long-term care centre) in Lachute and the widening of Autoroute 50.

Additionally, St-Denis stated that La maison du citoyen (a hub for various government services) should become a reality quite soon and be located downtown Lachute.

“One of my biggest wishes would be the construction of an arena with two ice rinks on Polyvalente Lavigne and Laurentian Regional High School’s premises. For that, we require no less than funding for two-thirds of the cost. The project is on hold, but should be accomplished for our youth; to see them persevere throughout their studies,” stated St-Denis.

The Argenteuil MNA then addressed the controversy that forever changed his political career back in April 2018 by stating that:

“These events taught me that, to be an MP, you have to be perfect. I’d even go as far as saying ‘since birth’. I’m just like everyone else; not perfect. I’ll never be perfect.”

The past couple of months have clearly been intense for St-Denis, with many left wondering if he planned a return to politics at the next election.

On this topic, St-Denis stated:

“Today, I announce that my final decision has yet to be made. I can also tell you that this has many people worried, including le Parti Libéral du Québec and, specifically, of Argenteuil. Recently, a prominent member of the Parti Libéral has threatened to destroy me if I ran as independent candidate for Argenteuil. It’s pure intimidation.”

St-Denis added that no one should be surprised if attacks came from all sides should he decide to once again run for office.

“Actions such as these are an affront to democracy,” said St-Denis.

“Winning by destroying a political adversary instead of promoting one’s ideas? What has the world come to?”

To help his decision, St-Denis will be spending the summer touring the constituency in order to consult the public.

To this, St-Denis sent Argenteuil an invitation:

“You will be invited to sign a form if you wish to support my candidacy. If the results are good, I will honour the gesture by running as an independent candidate in the 2018 elections. If not, I will go home.”