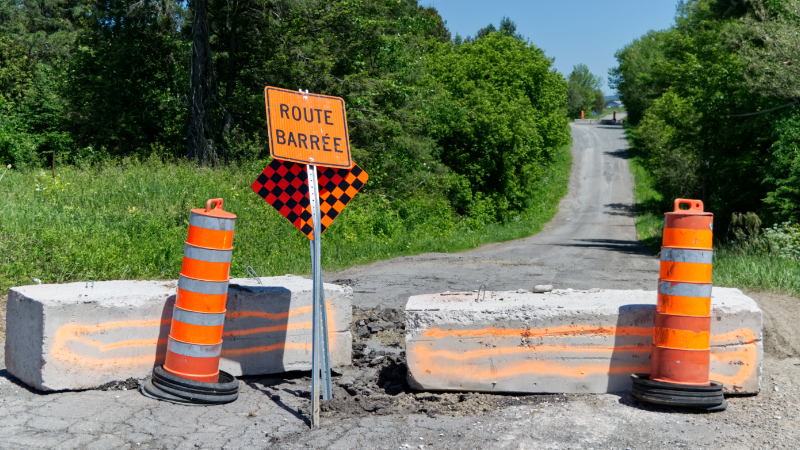 As of June 11, 2018, almost two weeks have passed since Montée Robert was officially labelled as unsafe and closed off. (Photo credit: Cedrik Bertrand)

For approximately two weeks, those residing on Montée Robert, located in the township of Brownsburg-Chatham, have had to deal with quite the inconvenience.

Soon after one of the road’s culverts started showing signs of imminent collapse, a section of Montée Robert was closed to traffic and a mandatory detour route was created with Concession 2. 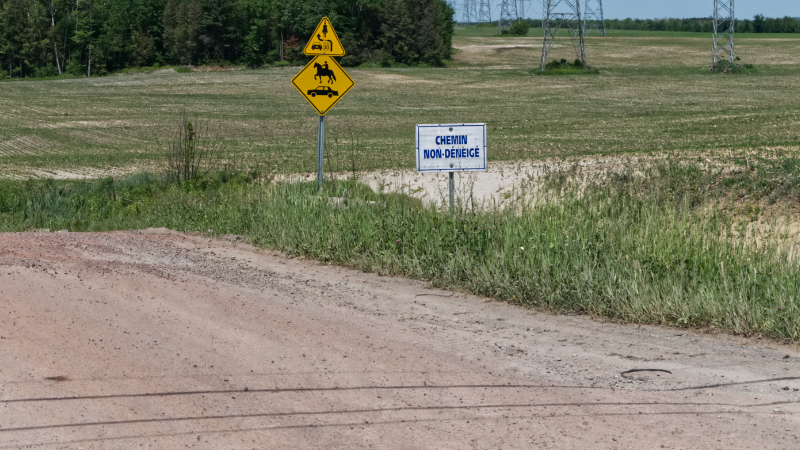 The entrance to Concession 2, the proposed detour. Up until very recently, the road was closed off due to lack of maintenance. If anyone was wondering, that sign translates to “no snow removal on this road”. Good thing the culvert didn’t collapse in January. (Photo credit: Cedrik Bertrand)

According to one of Montée Robert’s residents, Concession 2 was recently re-opened after being closed for almost five years.

Most residents agree; Montée Robert has been in pitiful shape for decades. Some sections of the road are covered with remnants of pavement and others with gravel, creating a dangerous surface that can be tricky to navigate.

Now, the damage has reached a critical point and the road is closed approximately 1.5 kilometres in from the Highway 148 intersection. Needless to say, many of the road’s residents (including farmers with heavy equipment) now need to make a significant daily detour. 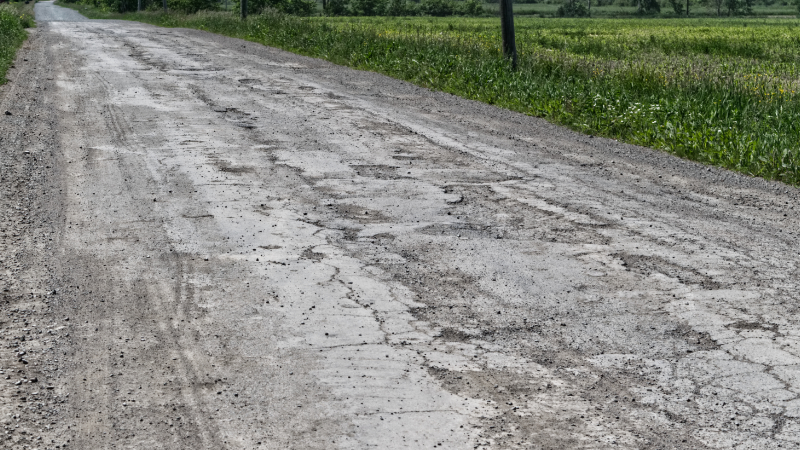 One of the worst stretches of Montée Robert is in pretty bad shape. (Photo credit: Cedrik Bertrand)

“The main concern is safety,” said Doreen Graham, one of Montée Robert’s residents.

“How do we get fire trucks and ambulances in here, now?”

Even though Montée Robert seems to be a quiet country road on the surface, it’s actually a surprisingly busy collector, connecting Highways 148 and 344 and providing quick access to the waterfront for those arriving from Highway 50.

Moreover, many transport trucks use Montée Robert to carry sand and gravel, since a nearby quarry is currently being exploited by Foucault Excavation. 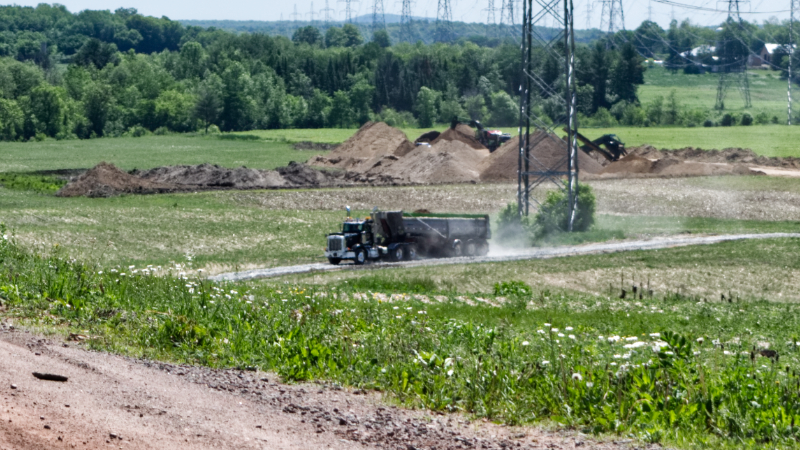 Montée Robert has seen (and will continue to see) a lot of transport truck traffic, carrying heavy loads of gravel and sand from a nearby excavation site on Concession 2. (Photo credit: Cedrik Bertrand)

John McCaig, a lifelong resident of Montée Robert, stated that the last major paving job was done decades ago and that, according to his memory, the culvert in question was last replaced approximately 50 years back.

Barbara Beatti, whose family has been farming the land for 120 years, reiterates this claim.

“This road is made up of people that work for a living, that pay taxes. Last year, council did give us some recycled pavement on a small section of the road, but the culvert that collapsed was installed in the 60s. As taxpayers, we kind of felt like second class citizens for a while,” stated Beattie, adding that the budget report they received back in February of 2018 stated that $300,000 had been set aside for Montée Robert.

Ann Gauvreau from Ranch Robert, one of the main tourist attractions on the road, has contacted the mayor stating that “as a resident of 38 years and owner of a recognized tourist business, I am petitioning to have the Montée Robert culvert repaired to at least allow passage for passenger vehicles.” She is worried that her clients visiting from Montreal and abroad will consider the detour a deterrent.

“This road has been here for many, many years,” said Graham, whose family first settled on the Montée in 1913.

“The problem has also been here for many, many years. The time for analyzing and research was a while ago. There have been many promises made for this road… Why haven’t any of them been fulfilled?”

Montée Robert has been under the jurisdiction of Brownsburg-Chatham since the 90s. According to residents, the road used to be cared for by Transports Québec and, since it was transferred to the municipality, hasn’t seen any major work done.

“Even before the closure, I’ve been pushing public works to get a study done to figure out the best way to re-surface that road. It’s a mess,” said Brownsburg-Chatham District 6 councilman Stephen Rowland.

“There are a lot of opinions on what should be done in terms of cost-effectiveness. Should it be returned to gravel? Should we use recycled asphalt? There are a number of alternatives to new asphalt, which costs approximately $600,000 per kilometre.”

Rowland stated that the first step is figuring out what must be done and preparing the necessary permits – a potentially long step.

“For culverts, you need a certificate of authorization from the Ministry of Environment (MDDELCC). Ideally, they would fix the culvert before the winter, if they can get the permit to do so.” 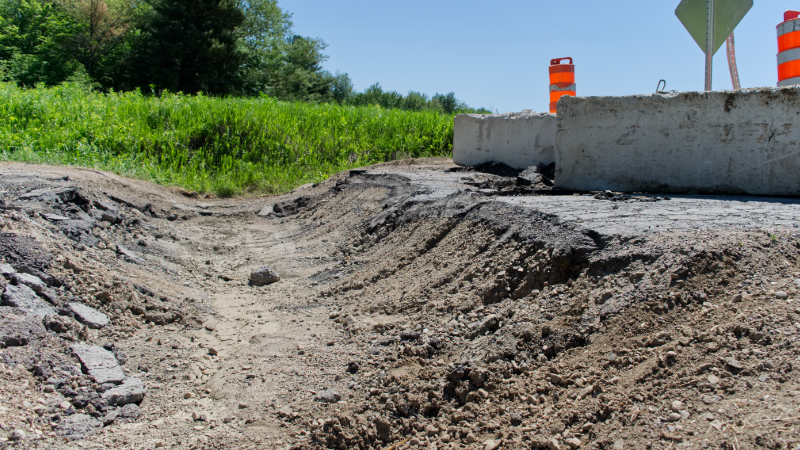 One of the MRC’s engineers labelled a culvert as unsafe. Since then, the culvert has been exposed and the road closed off. (Photo credit: Cedrik Bertrand)

Replacing the culvert represents a $100,000 cost. Sadly, there’s no telling how long it will take to receive the permit.

“There’s no way to force them and they tend to be quite slow. We still haven’t received our certificated of authorization for the marina. I’m not criticizing, it just takes a lot of time.” added Rowland.

The councillor said that he had recently been contacted by many citizens regarding the Montée Robert issue.

“One of them wanted to form a committee to put pressure on city hall. I suggested that it would be better to wait until late summer or early fall because right now, the only answer you’re going to get is: ‘we’re studying it’.”

If anyone was wondering, Councilman Rowland stated that there were no plans to permanently close Montée Robert.

Paramedics say their wages should be topped up because they, too, are frontline workers

Petition to the government for high-speed internet in rural areas 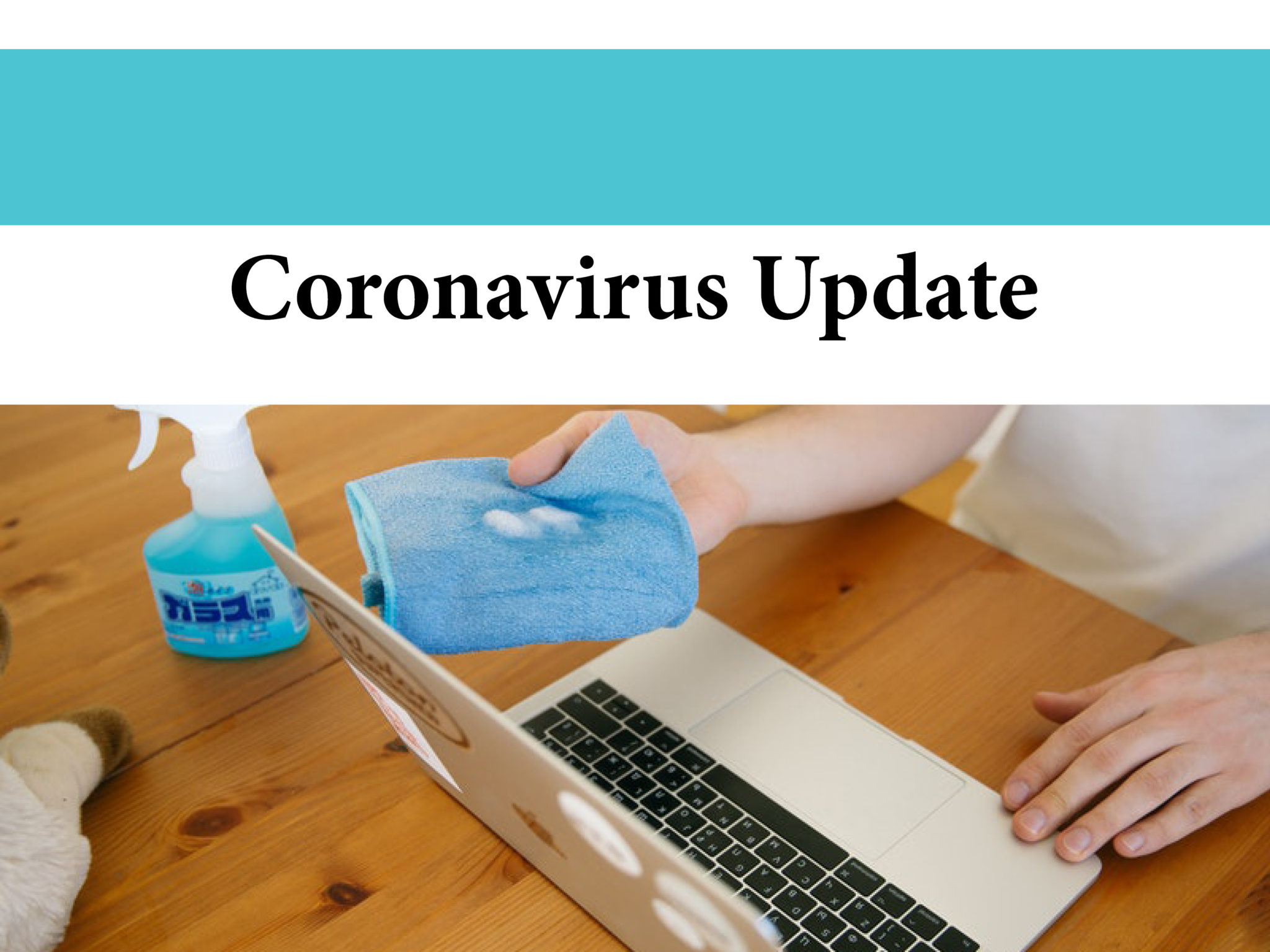