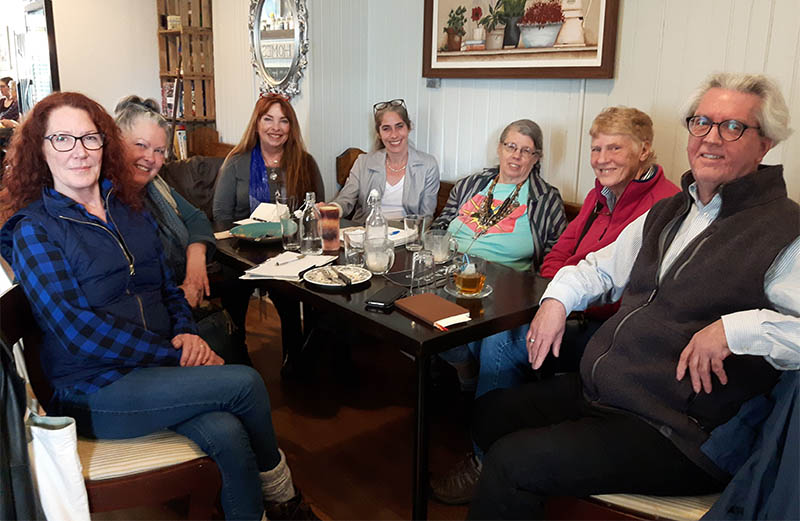 A group of local artists met recently to discuss the artistic aspects of the mural restoration. From left to right are: artists Jill Crosby, Laurie Lefaivre, Lorie Turpin, Cynthia Mitchell, Susan Jepchott and Lis Skelly. At right is Derek Evans, who has been investigating options for preservation and/or restoration of the historical murals in Vankleek Hill. 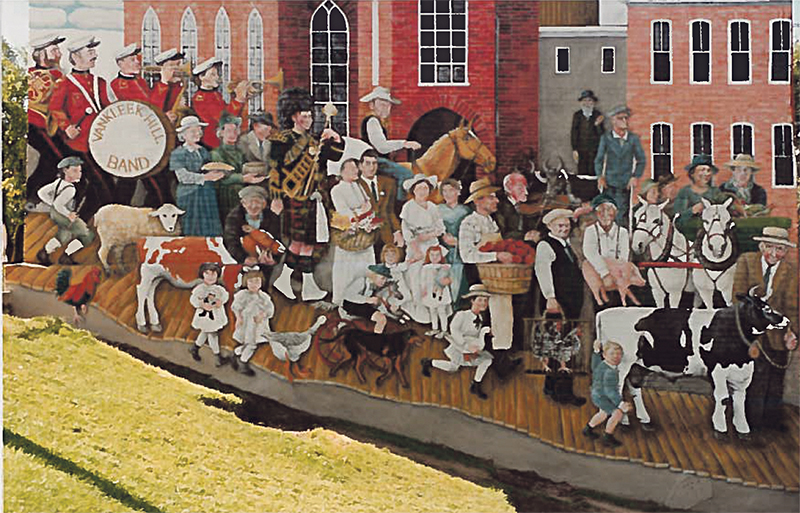 Vankleek Hill’s historical murals are fading beauties. If only we could bring them back to their original glory, but we cannot reverse the toll taken by time and the elements. There are plans in the works. And there is good news and bad news when it comes to preserving and protecting the community’s murals.

Volunteer Derek Evans has been talking to mural experts and residents for the past year or so, exploring possible solutions to preserving the existing works of art, which are also a kind of composite snapshot of local history.

We met with Evans recently to learn more about the future of the murals.

There is good news about the mural called, “Community Patchwork”, located on the side of the Pink Bow Tie building, at the main intersection of Vankleek Hill (Highway 34 and Main Street). That mural, parts of which have greatly faded, will be removed from the building and will be completely re-done. A volunteer team of artists will re-create that mural and Evans further hopes that local residents will support the re-painting project, in much the same way that the original mural was funded. That mural was funded by having individuals and groups pay for specific images which were part of the mural, Evans recalled. Those who originally sponsored sections of that mural will receive invitations and the first opportunity to sponsor their space for a second time around, ensuring that “Community Patchwork” will live on for another 25 years.

It is hoped that about 20 artists will get involved in the project and that the re-creation of the mural will take place during Heritage Festival weekend.

Going to the Fair

There is some bad news, however. The “Going to the Fair” mural, painted directly onto the brick on the side of the Wagar and Holland building, began to deteriorate the moment it was completed, said Evans, partly due to the surface.

“I have had a number of assessments by artists and it cannot be restored. It could only be completely re-done,” said Evans, noting that artist Lis Skelly was the main artist on that mural. Artist Odile Têtu was the second artist who worked on the historical Vankleek Hill murals. The late Phil Arber was the third member of the Vankleek Hill Historical Mural Group.

The murals which create a single mural on the side of the Jade Garden building on Home Avenue are in the best condition, considering their age, Evans says. But those murals, too, cannot be touched up. These murals, painted primarily by Tetu, who was more of a portrait artist, cannot be replicated, according to Evans. The murals would have to be completely re-painted and that has a big price tag attached to it.

“Despite repeated efforts to have someone tell me different, those murals will deteriorate and fade away,” he said. Evans is continuing to investigate possible remedies, including digital reproduction on metal plates, a technique being considered for murals in Alexandria.

But there are plans to preserve the images, says Evans. Two large three-feet by four-feet interpretive plaques will be installed in a proper location and will include a full-colour painting of the original murals as they were when they were first installed, including the names of those depicted in the murals.

“There are several generations of people significant to history and to the future. Joel Harden, the Ottawa Centre NDP candidate who was just here in his hometown recently to talk about his election campaign, is one of the children in the mural,” Evans noted.

And now, some more good news. As part of this project, the commissioning of a new mural will take place. That new piece of art will be a reflection of the 20 years which have passed since the painting of “Community Patchwork.” This new mural will be installed on the south side of the Liquor Control Board of Ontario retail store on Mill Street in Vankleek Hill.

Called “Community Tapestry”, it will include images of important events which have occurred in the past two decades, and will be designed in a mosaic model.

Here is where you come in.

“We are inviting members of the community to submit their photos or ideas. In other words, what do you think are the most important events of the past 20 years? Think about the years 1998 to 2018. What happened in this community? What events stand out?” asks Evans.

Arbor Gallery board member Lorie Turpin will be recruiting artists to work on this new mural and Evans is aiming to unveil it at the end of the summer.

Funding for this project will be done in the same way as for “Community Patchwork.” Once a three-member committee has reviewed the submissions, the images will be provided to a designer who will assemble a “mock-up” design for the 24-foot by eight-foot mural. A cost will be calculated and a price will be determined for each image, which will be available as a sponsored space. Community Tapestry 2018 will be advertised, with the list of available spaces and their cost, in The Review during a solicitation period. The Review is participating in this project as one of its 125th anniversary community projects.

“We are asking for people to think as creatively as possible about the events of the past 20 years,” said Evans. The three-member review panel will consist of Evans, Review publisher Louise Sproule and Champlain Township Mayor Gary Barton.

To date, Evans has raised about $12,000 for the mural projects. Champlain Township recently approved an $8,000 donation to the project; funds were provided from the Vankleek Hill Hydro reserve fund.

If you would like to make a donation, cheques can be made out to Arbor Gallery (Murals Project). All donors will receive a charitable donation receipt.

Arbor Gallery has kindly taken this project under its wing, said Evans.