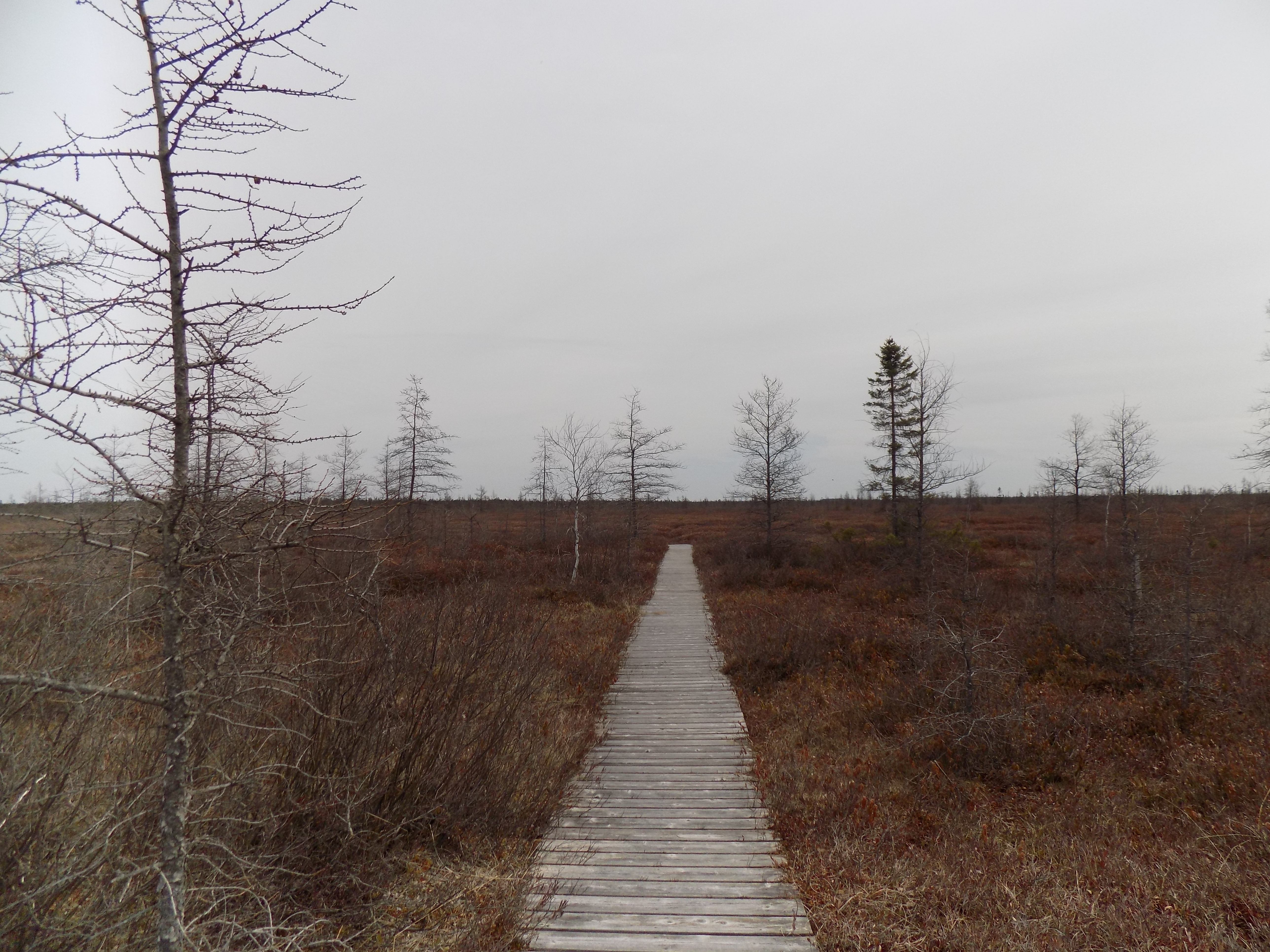 The Alfred Bog and Bog Walk

The Alfred Bog will soon be the newest addition to Ontario’s provincial park system.  The 10,000-acre/40.5 square kilometre wetland is just south of Alfred.  The Ontario Parks division of the Ministry of Natural Resources and Forestry already manages the bog but has begun the process of regulating it as a full provincial park.

The Alfred Bog is the largest of the three “domed” peat bogs remaining in the southern half of Ontario.  Domed bogs form from retreating glacial water when layers of peat accumulate and gradually rise.  They accumulate water only through whatever precipitation they can absorb.  Michelle Cavanagh of the South Nation Conservation Authority said the bog helps retain water during droughts and soak up precipitation to prevent flooding.

Black Spruce, Tamarack, Red Maple, Atlantic Sedge, White Birch and rare White Fringe Orchids grow throughout the Alfred Bog.  Wildlife in the bog includes Ontario’s most southerly moose population.  In the early 19th Century, the Alfred Bog was more than double its current size, but then settlers arrived and started draining it to use the high-quality soil for farming.  In the early 20th Century, the federal government began encouraging the commercial extraction of sphagnum peat moss because it could be burned for home heating as an alternative to coal.  That led to even more of the Alfred Bog being drained and its precious peat being dug up and shipped away to be burned in stoves and furnaces.  During the 1920s, large peat extraction and cutting machines combed the bog.  A narrow-gauge railroad was built to carry the peat to the main line.

By the 1980s, the peat industry was looking to expand, and concerns grew that whatever was left of the Alfred Bog would disappear.  Conservationists lobbied to have the property protected.  In 1984, the Ontario government designated it an Area of Natural and Scientific Interest (ANSI), and a Class 1 Wetland.  Various organizations and individuals own land in the Alfred Bog.  The South Nation Conservation Authority owns 200 acres/1 square kilometer, including the Bog Walk.  It’s a short, 298 yard/273-metre boardwalk across a corner of the bog.  There are no signs for it, it begins at the eastern dead end of the 11th Concession, east of Montée Giroux.

Cavanagh said the Alfred Bog will be what is known as a “non-operating” park and there will probably be few changes at first to how it can be accessed by the public.  Susan Grigg, the Senior Park Planner for Ontario Parks Southeast Zone, said the park will be designated under the Natural Environment park classification.  It allows for certain recreational uses which will be determined as the management plan is developed.  The process for developing that plan will include extensive public consultations and information sessions.  Those usually include nearby landowners, businesses, local governments, recreation organizations, conservation groups, and Indigenous people.  Grigg said the existing bog walk boardwalk will remain open.  The park itself will be under the direction of the Superintendent of nearby Voyageur Provincial Park.