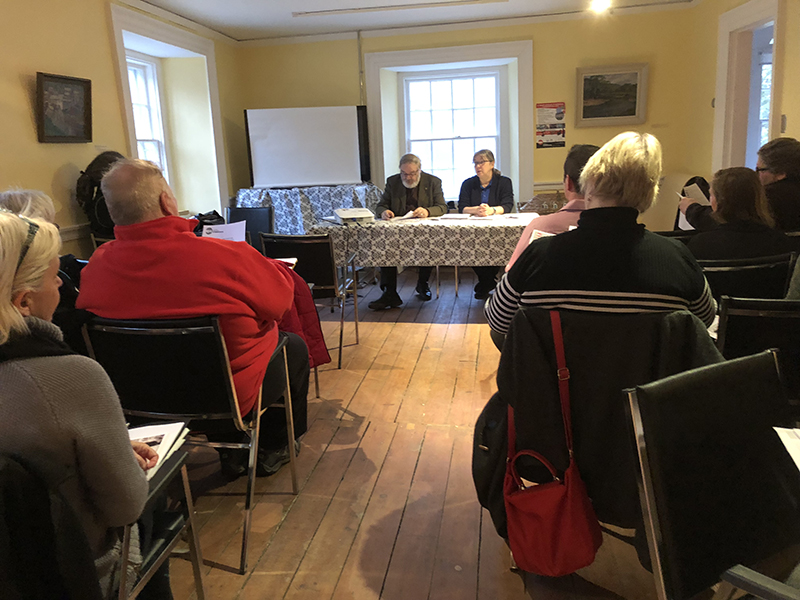 On Tuesday, April 17, the Argenteuil Regional Museum held its annual general meeting, led by Luc A. Lépine, Vice-Chair of the Board of Directors, to present to its members its annual report, its financial statements for the year 2017 and elect its board of directors for 2018. The year 2017 included several milestones. During the first half of the year, the museum underwent asbestos decontamination work and emergency measures to protect the building during the major spring floods.

Thanks to the interventions of Parks Canada and the Canadian Army, no items in the museum collection were damaged. Following Parks Canada’s ban on storing or exhibiting artifacts in the basement following its decontamination of mold in February and March 2018, the museum is currently in discussion with potential partners to find a place to house these primarily agriculture-related and large-format items.  Nevertheless, the summer of 2017 saw a large increase in visitor numbers. Parks Canada’s promotional campaign for the 150th anniversary of Canadian Confederation and free access to its sites, including the museum, resulted in an increase of over 170% of visitors last summer, from 888 in 2016 to more than 2400 in 2017.

For the summer of 2018, the museum will continue to provide free access to its exhibits while encouraging voluntary donations from visitors.  The major project in 2017 was the inauguration in September 2017 of the exhibition “The wheels of an Argenteuil industry, from the Dominion Cartridge to Orica”. The museum thanks the Orica company as well as the Quebec Ministry of Culture and Communications, the Argenteuil MRC, the City of Brownsburg-Chatham and the Lachute Lions Club for their trust and financial support.

For 2018, the museum’s priority remains its operating budget. The MRC d’Argenteuil has allocated $50,000 to the museum for 2018. The museum has also been working for several years to receive some form of recognition of the part of the Quebec Ministry of Culture and Communications (MCCQ) and to to obtain financial support. In the meantime, thanks to the new cultural agreement between the MRC d’Argenteuil and the MCCQ, the museum will be able to benefit from $ 25,000 over a period of three years.

The museum board of directors elected for 2018 are Luc Grondin, Luc A. Lépine, Arlette Moreau, Marie-Ève ​​Nadeau, Vincent Bélanger, Francine B. Dobbie, Lucie Jubinville, Denis Pelland and Michael Steimer. Two positions remain to be filled. If you are interested in joining the board or becoming a Friend of the Museum, please email [email protected] or 450-537-3861. The museum invites you to visit its Facebook page to stay informed of special programming this year celebrating the 80th anniversary of its founding. The summer season will begin Wednesday, June 20 at 10 a.m. Its guide-interpreters will be on site from Wednesday through Sunday from 10 am to 5 pm until September 2, 2018. The first special activity of the museum will be its traditional country feast on Sunday, July 1 from 11 am to 4 pm.