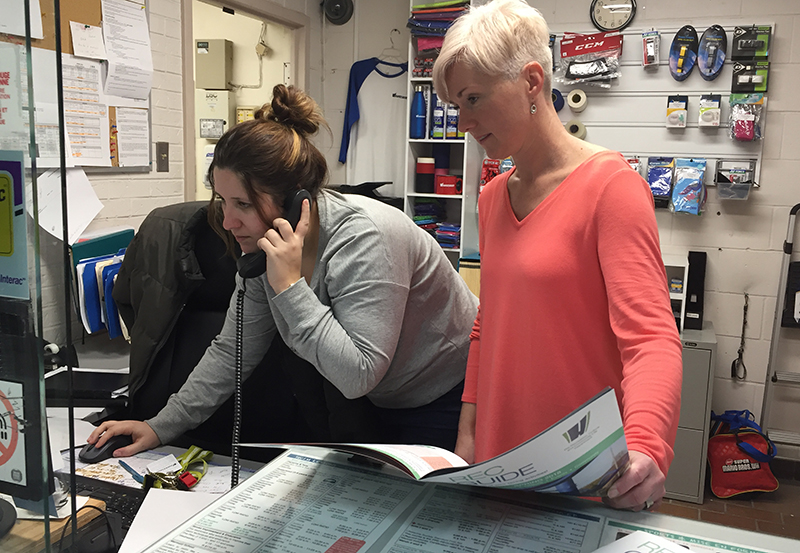 Zoé Fortin (at left) is a recreation technician with the Town of Hawkesbury. At right, is Director of Recreation and Tourism Nicole Trudeau.

A March 28, 2018 letter to the editor published in The Review contained inaccuracies.

The Review met with Nicole Trudeau, Director of Recreation and Tourism recently to set the record straight.

A claim that the town did not obtain a routine funding grant to pay for Canada Day fireworks is untrue. For Canada’s 150th year, a new grant structure was created, temporarily replacing the existing grant formula. The Town of Hawkesbury applied for $14,000 to support its Canada Day festivities in 2018.

A reference to multiple errors contained in the municipality’s recreational guide is correct, but Trudeau says the errors were addressed and added that the town has now completed the first full cycle (four editions) for the guide — which was  paid for as part of a $67,000 grant. Moving forward, now that the full cycle is complete, modifications for subsequent years will be simpler and in the meantime, the municipality has engaged, on a contractual basis, someone to insure translations and printed matter contained within the guide are correct and accurate. The $67,000 grant provided funds to be spread over an 18-month period and was received from the Ontario Sport and Recreation Communities Fund.

The letter-writer stated that the Town of Hawkesbury had stopped organizing summer camps for children. The town has not always organized summer camps but in recent years, the task had fallen to the municipality. But Trudeau says that last year, the town’s recreation and culture department collaborated with 100% Actifs, providing facilities to that not-for-profit group at no charge, which organized a summer camp and a spring break camp for local children. In addition, École Paul VI and École Nouvel Horizon also have and will continue to organize summer day camps and Trudeau says that for the summer of 2018, the Town of Hawkesbury has partnered with them, offering municipal facilities by sharing their offer and giving registration information to those who contacted the municipality.

“We didn’t want to compete with a not-for-profit group or schools in our community. It was decided that it was best to partner with them and we’re not going to compete with our partners,” Trudeau says.

That said, Trudeau says the town recognized that there might be additional needs and a different way for the recreation department to help parents during the summer.

This year, from the time school breaks for summer until the end of August, there will be animation in three of the town’s parks, as a kind of drop-in activity for children and parents.

“This is completely free and it’s for kids who don’t necessarily sign up for full-time day camp. Plus, it’s a chance for kids to spend time with their friends and spend a half day or a few hours at a park and have some fun. Parents are welcome to attend with their children,” Trudeau noted, adding that it can be a help for grandparents or extended family members who may be helping out by taking care of children during the summer.

Trudeau says that there is change afoot in Hawkesbury. That’s not to say that programs or service changes are happening for the sake of change, but she says that the recreation and culture department for one is taking a close look at the population to see what will best serve people.

One can see where this direction comes from; Trudeau is currently pursuing her Master’s degree in Change Management  as it relates to Recreation Services. The intensive course is also practical; students are asked to use real situations in their own municipalities for assignments.

“We did a lot of work related to studying our population. For me, it became clear that we needed to offer activities for free, to encourage physical exercise. We recently made access to our tennis courts free, with the hope that more people will use it. At special events, we might offer a free lunch. That attracts a lot of people, sometimes,” Trudeau said. To keep costs down, Trudeau says partnering with other organizations, like Valoris, and social groups such as Richelieu, Rotary Club, Chevaliers de Colomb and the Legion can help, as well as asking for support from community sponsors.

A few facts that Trudeau uncovered during her research is that in Hawkesbury, 52 per cent of the population is over 50 and active.

She says that she, and other recreation department heads are also taking a hard look at volunteers and how municipalities can support volunteer efforts, but not necessarily pick up the responsibility for community activities that seem under threat due to volunteer shortages.

“If volunteers are not responding to a call, we need to ask if the program being offered is what parents and kids want or need. Times have changed and the idea that ‘always the same people’ will volunteer may no longer be true. So many organizations and youth sports activities were started by volunteers. The thinking is that we have to get the word out that we can support volunteers and maybe make their job easier,” Trudeau said

It could be as simple as a central mailbox at the town hall, making copies or providing a space to meet, Trudeau said.

The new volunteer may be different from the volunteers of days gone by, Trudeau said. Today’s volunteer has to be involved in something that is about their passion, people like to volunteer with their friends and you have to give volunteers a voice in what’s happening, she said. Her perspective about today’s volunteer profile changed after taking a policy course last year, which was related to all aspects of volunteering.

“Volunteers are a huge part of the social fabric. What would any community be without all of the volunteer-run organizations? There would be nothing,” she said.

“We need to take the information we have and use it to recruit volunteers,” Trudeau said.

As far as the town’s recreation guide is concerned, Trudeau mentioned that Zoé Fortin, one of the town’s newer employees hired as a part of the $67,000 grant mentioned earlier, is putting her graphic design skills to work by taking on most of the work associated with the guide. To this end, she, and another employee from Alfred-Plantagenet are taking a two-day training on software to facilitate working on the guide. Alfred-Plantagenet has plans to produce its own recreational guide, Trudeau said.

One priority for the next while will be to update existing facilities, said Trudeau. Much of the town’s infrastructure is decades old and needs updating. Regulations have changed for playground equipment, buildings, access and so much more.

“While we have to ensure we keep up with regulations, we know that people’s expectations have changed. In many cases, we are competing with private enterprise and often, we have to do this on a shoestring budget,” Trudeau explained.

Working together, developing new partnerships and offering support to community organizations so that everyone feels like they are part of the community is one of Trudeau’s goals. She cites the example of the Orca Swim Team, which may seem independent of the community, “but it is part of our community,” Trudeau emphasized.

L’Orignal physiotherapist Patrick Lalonde will be setting up a satellite office at the sports complex, Trudeau pointed out. And this summer, the town will be organizing some of its own riverfront activities, including offering pedalos, stand-up paddle boards (SUPs) and kayaks for rent at the waterfront. Another project in the works is the creation of more activities for teenagers. If you have ideas or suggestions, you can email: [email protected]

“For every dollar spent on recreation services, there is $11 saved in social services. Recreation can be a tool to break the negative cycle, can help to build resilience and protect against the risks of low success in school and the labour market,” Trudeau ended.