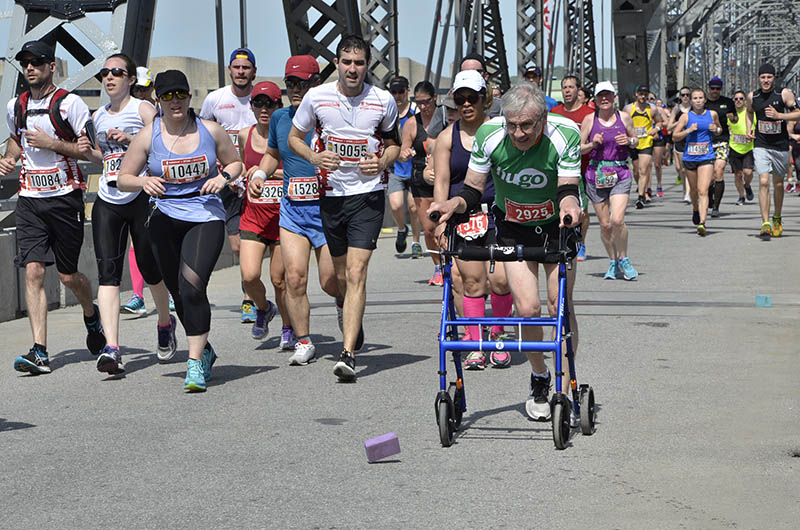 Walker-runner Bob Hardy is currently training for the Ottawa, full (42.2-km) marathon and he is extending an invitation to people to join him for his next 30-km time trial. The 30-km time trials are a very important part of his marathon training, he says.

His next 30-km time trial will be on Wednesday, March 21 at the Tim Horton’s Dome in Alexandria. He starts at 1 p.m. and finishes around 5 p.m. He has other runners and race-walkers join him for part of the 30 kilometres. No one has ever completed it, he says.

Robert “Bob” Hardy,  calls himself a Walker-Runner. He says he took up walker racing when health issues meant he could no longer ride a bicycle due to balance issues.

At age 67, he is going faster than ever.

Hardy says he will be able to beat his previous time because he has improved his walker racing technique, his breathing, his nutrition, and he has optimized his racing equipment and started early with inside winter training at the Tim Horton’s Dome in Alexandria.

Here are some of his results:   2018  Personal best “inside the dome” times to date.

His strategy for the marathon is to maintain a speed of 7 minutes per km. He is allowing 15 minutes for unexpected emergencies and doesn’t want to “hit the wall” as he did in 2017.

Here is a link to 2017 Ottawa Marathon photos and video.

Another upcoming race takes place on April 28 in Cornwall; that one is called the Run to End MS and is a 10-kilomtre race.

“Race walking is an Olympic sport, walker racing is not  . . . yet,” says Hardy.