Historic building at the intersection of creative collective future 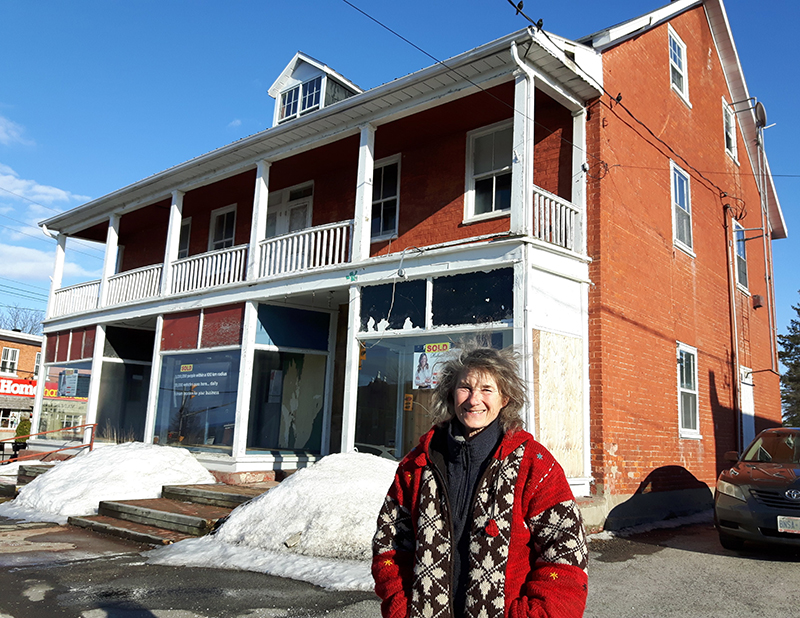 Samme Putzel says the purchase is a continuation of the work of Excellent Events, which she says uses the town as a setting for all that it does.

“This is a town that beckons,” said Putzel, who is continuing the work of the late local event organizer, Phil Arber, and his enterprise known as Excellent Events.

Putzel says the plan for the building is all about creation and potential. She has plans to build a creative collective of artists, musicians, performers and all creators, she says.

“It’s not only about the traditional arts but can include those who create with computers or do other creative endeavours.”

The building will also be another indoor venue for the already-existing events that Excellent Events organizes, like the May Heritage Festival, for example.

“When people come to town and buy something at a craft show or at the artisan booths along Main Street, maybe they will be able to return to town and buy those items at the cooperative,” she said.

As she spoke, she stopped herself to make this point: “I have lots of ideas, but I don’t know what shape it could take. We have the building now and the goal is to be able to offer the opportunity to local, rural people,” Putzel said, adding that maybe the building will become a place where a writer can come and stay for a month to complete a writing project.

“We are opening up the building and will put back what we want and what we need. It’s kind of flexible right now,” Putzel said.

The Dominion House was built in 1850 after the previous hotel on the property had burned to the ground. It changed hands often during the next 50 years, Putzel said and then housed two commercial store fronts. Mackenzie’s Men’s Wear was located on one side of the building, and Napoleon Sauve and his wife had a ladies wear shop in the other store front. Since those businesses came to an end many years ago, subsequent businesses have included a bulk food store, a children’s wear shop, a coffee shop, a wool and fabric shop and more recently, was home to Jade Garden (before it moved to Main Street) and to Bobby Lalonde Music, which relocated to Hawkesbury.

Putzel says the possibilities are endless; not-for-profit groups could have space from which to operate and she said that already, three artists have a project which needs a space as they prepare to apply for funding.

Her dream is also for sustainability for the project in every way and that includes sustainable energy, being waste-free and gardens, too.

After listening to her speak about the cooperative collective for a few minutes, one can tell that this idea has been in her mind for some time.

She continues to speak about helping creators. People have come to devalue the work of artists and musicians. Sometimes, it is to these very artists that people turn for free art donations, or for free music at events, says Putzel. And even if it has been that way for a long time, Putzel hopes that the creative collective will be of help to artists so that they can earn the money they deserve.

Yet above all, she hopes that whatever shape the initiative takes – at the end of the day, she hopes people will all contribute their own human potential.

“What we don’t need more of is more competition that crushes the mind,” said Putzel, who says her mind goes back to a time years ago when a local young woman who was also a talented artist, but whose sexual orientation likely made her feel out of place in this community – took her own life.

“If only there had been a place for her to go. This is an antidote to hatred and violence and discrimination,” Putzel said.

And the project could go a long way to keeping the village vibrant, she added, by opening it to new ideas and encouraging people to pursue their dreams.

Going back to basics is where Putzel wants to start – with the building. Most of the structure inside is already open, she said.

On March 18, from 1 to 3 p.m. she is holding an “as is” open house event at the building, located at 11 and 13 High Street in Vankleek Hill (the corner of Main Street and High Street).

“Those who attend will be invited to share their email addresses with us and we hope that the people who contributed to the Philip Arber Foundation come to see the place. This is one of our answers to all of the messages of sympathy after Phil’s passing. This is definitely a follow-up to that,” Putzel said.

Although she has had her eye on the property for years, she says there was one morning in January of this year when she woke up knowing that she was going to purchase the building. “I just woke up thinking it is now or never,” she recalled.

She says that although the collective does not exist yet, the building is now there, a physical embodiment of what is to come.

“The longer I live, the less I have to lose and the more I have to gain,” she said.

The green space, or triangle of land between the Dominion House and the Low’s Realty building, will become the Philip Arbor Memorial Garden, she says, with a bench. And a sign that says: Meet me at the intersection of the past and the present . . . and the future. (That part about the future is an add-on to one of Arber’s favourite slogans about Vankleek Hill.)

To learn more, you can also go to Arbor Gallery Cultural Centre on Saturday evening, March 3, to hear Putzel speak about creative collectives, as part of the Arbor Gallery Speaker Series. The talk begins at 7:30 p.m. Arbor Gallery is located at 36 Home Avenue in Vankleek Hill. 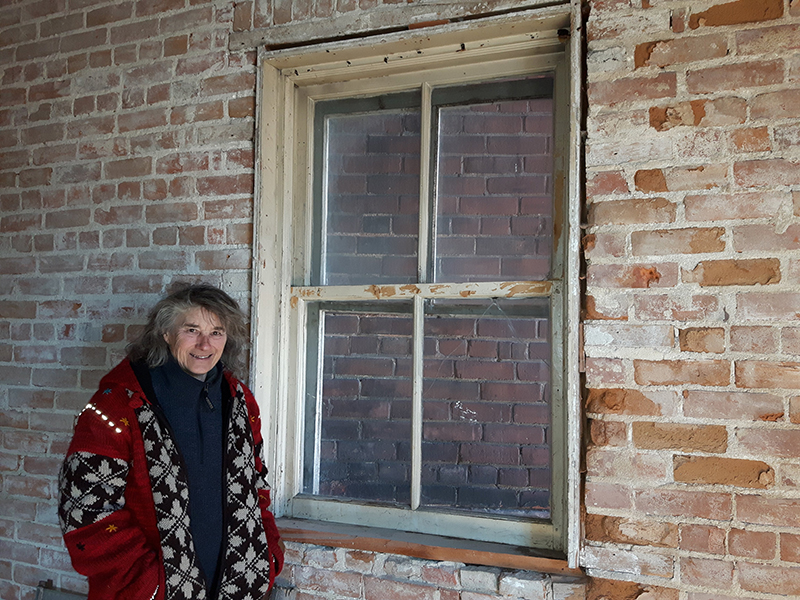 Samme Putzel stands beside a window with an odd view, but a view, nonetheless, which says “Vankleek Hill” all over it: the window looks out on the red brick wall of a neighbouring building and veers off at a surprisingly tight angle. 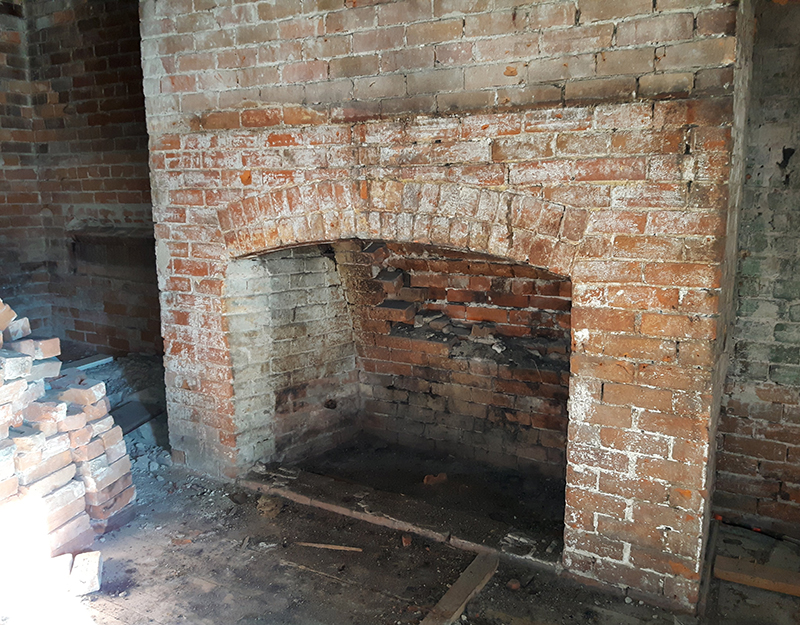 In a small room at the back of the building, this fireplace was located in the kitchen of the Dominion House Tavern, notes the new owner of the building, Samme Putzel. It is her favourite room, she says.