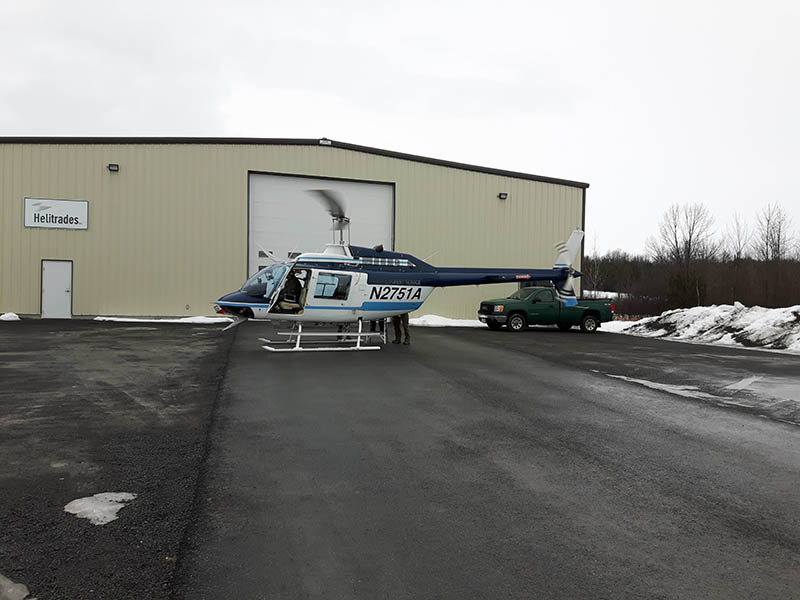 Helitrades has been in business in Vankleek Hill since 1979, repairing and overhauling helicopter drive trains, hydraulics, flight controls, transmissions and more.

But this week, a helicopter outside Helitrades got our attention and we stopped by to take a photograph and find out more. As it turns out, the helicopter was from the state of Maine’s forest service and had been trucked to Canada last fall for repairs due to a cracked fuselage, said Gerry Tom, owner and president of Helitrades. And the work represented a new direction for Helitrades.

About 400 hours of work has gone into this repair job, the first of its kind for Helitrades, which recently purchased the assets of a company located north of Toronto in order to expand the offerings of the Vankleek Hill company.

The helicopter was placed in what Tom called a big jig, or steel frame, to facilitate the repairs of the primarily aluminum fuselage.

“We are the only ones east of Alberta that can do this kind of repair and we hope to grow this as a bigger part of our business,” Tom said, adding that it is part of the company’s diversification plan.

“We hope to grow this to be a bigger part of our business.”

Helitrades, which employs eight people at its head office in Vankleek Hill, also has a location in Calgary with six employees and another north of Toronto with four employees, all operating under the Helitrades name.

Helitrades does much of its business with the Canadian government, but also has overseas customers, repairing helicopters as the need arises, but Tom said that everyone at Helitrades was pretty happy with this new line of services and hopes for more work like the fuselage repair job for the Maine Forest Service helicopter.

On Wednesday afternoon, a pilot flew the repaired helicopter back to Maine.