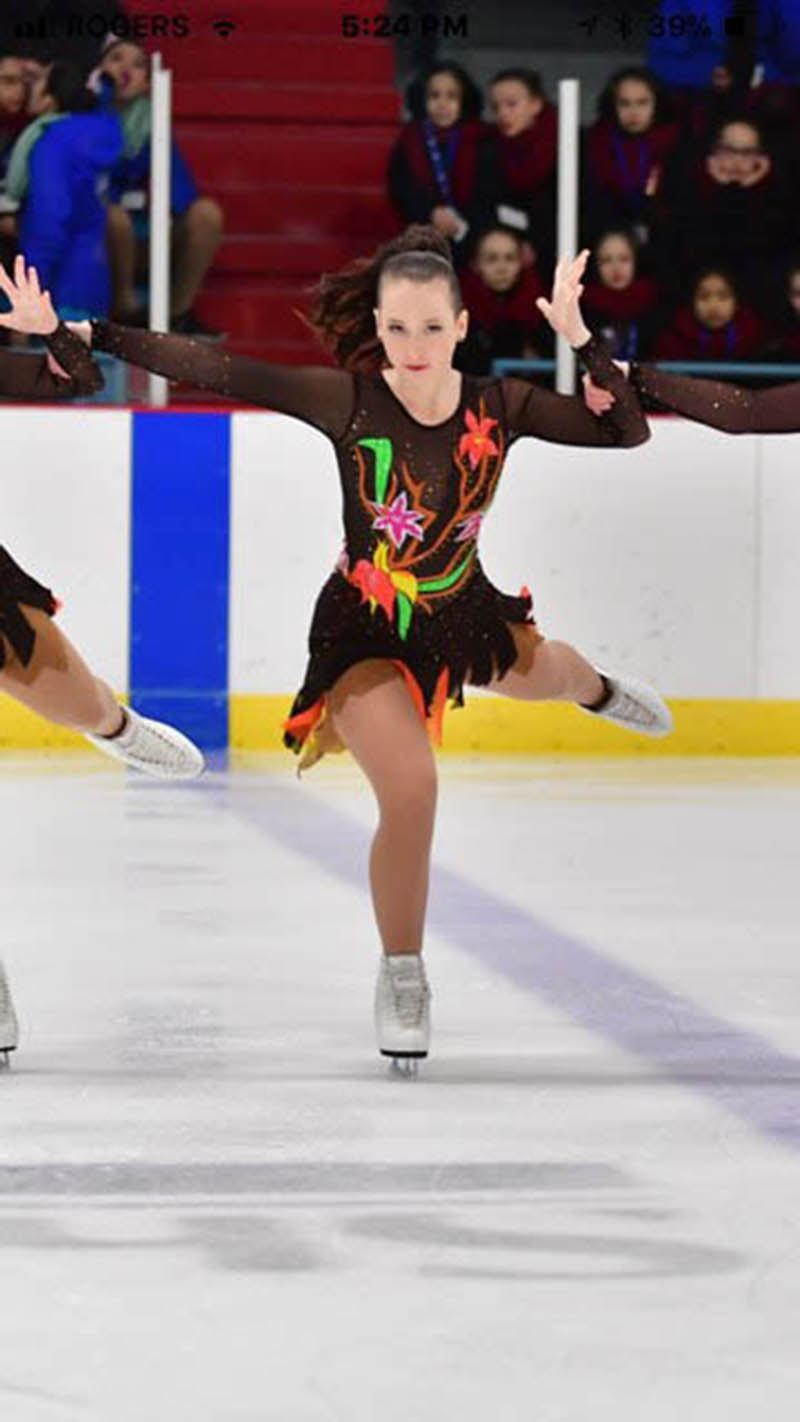 Fifteen-year-old Evy Cooley of Vankleek Hill was in Oshawa this past weekend, competing at the intermediate level of the 2018 Skate Canada Synchronized Skating Championships.  The championships took place February 23, 24 and 25, 2018.

Before leaving for Oshawa, Evy stopped by to talk with The Review about skating. She began skating at about age two, she says, thanks in great part to having a mom who is a figure-skating coach. Although she lives near Vankleek Hill, she is a member of the Team Harmony Synchro Skating Team, which is part of the Club de Patinage Lakeshore Skating Club.

Evy skates at one of several locations including Kirkland, Beaconsfield, Pierrefonds and Dorval, just to get in the skating time, she says.

Included in the four to six hours per week of practice are off-ice stretching and program practice, which means focusing on the choreography and things like arm placement and expressions, explained Evy.

“It’s hard to get everything perfect at once when you are skating – to keep in line and keep your movements the same; you have to look at the other skaters to make sure your arms are just right and also have the right expression on your face,” she noted.

This is Evy’s first year competing on the intermediate team; she has been skating with the team for two years. An injury kept her off the ice last year, she said.

Team Harmony is at the nationals, having competed at other regional competitions and then the provincial competition in Sherbrooke three weeks ago. Teams must quality to move on to the next level, she added.

Evy describes the intricacies of performing official practices and having judges watch the skating program itself while at the same time, the skaters are judged for elements, like “pretty arms”. It all sounds quite rigorous.

But she loves it.

I’ve always loved competing and playing with a team. It’s fun to win. But there is also a whole team there with you for support when you lose. I’m one of two captains and this year, I am teaching the newer girls. Synchro is very different. You have to be more aware and do everything exactly the same way every time. I am way more aware of every thing that I do than if I were doing single skating,” she explained.

“It is a real team effort. Every year, things get a little harder.” Intersections – those moves where rows of skaters pass through each other – have to be perfect and as skaters mature, the intersections become more difficult, she explained, giving one example.

“The hardest part is trying to keep everything in line. You’re always looking at other people to see where they are and what they are doing.”

And how about her parents?

“It must be hard for them. We are always in Montreal, like three times a week. We are always at a rink. Our parents do everything for us (her brother plays hockey, too). They put us first and often, skate events are not close to us.”

The Harmony team finished 11th out of 13 teams but hopes to be back next year!

Les Supremes from St-Léonard won the junior title at the Synchro Skating Championships. Skater Grace LeTouzel from L’Orignal skates with Les Supremes. This was the fifth national title earned by the team.