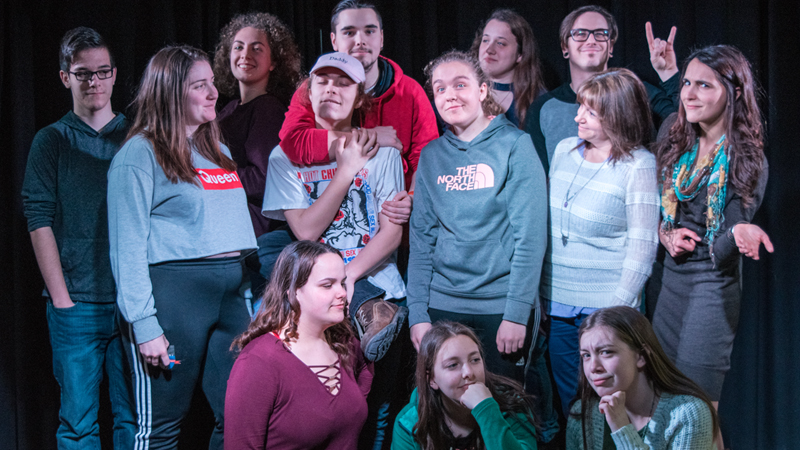 The cast and directors of l’ESCRH’s Festin chez les Morin invite you all for Thanksgiving dinner on March 1, 2 and 3. Photo credit: Cedrik Bertrand

The play is directed by Christine Brassard and Amélie Lafrance, both teachers at ESCRH.

“The play was originally written for six actors, but we wanted something we could adapt in order to add more actors. The script was altered, the ending changed and we added musical numbers not found in the original.”

Adapting a play is an interesting change of direction for the group, which had been writing its own material for several years. After selecting the script, Brassard herself contacted the playwrite, who generously gave the school permission to adapt his work.

“I liked the story and we were set on producing something funny and lighthearted this year,” said Brassard.

The cast numbers include 13 students from grades 9 to 12 and marks grade 9 student Thomas Dion’s first contribution to the Coup de théâtre group’s portfolio.

“It was fun since the beginning! I’m used to receiving a final script, so the writing part was the biggest challenge for me,” said Dion, adding that “we never felt rushed though, we always had plenty of time to write.”

Léanne Boudrias, a grade 11 student, will be playing one of the leads.

“I play a 30-something woman who hosts Thanksgiving dinner for all her family, but something (that will remain secret for now) has me really stressed out… On top of all the family conflict.”

“With a comedy like this, everyone gets a lot of lines and stays on stage for a long time. Many won’t leave the stage until the show’s over. There are no breaks; you have to know your lines.”

This year’s production also has a few grade 12 veterans in its roster, including Cara Dewes, the mastermind behind the musical aspect of the show along with Matthieu Leroux, ESCRH’s music teacher .

“The actors chose when they thought it best to integrate music and I help them by adjusting the tone of the songs depending on the moment. If it’s a happy song but we need to make it sad, I’ll adjust the chords and tempo.”

An accomplished pianist, Dewes will also be performing the songs on the ivories during the show.

“I’m on the piano but we also have Vincent [Desjardins], one of the leads, on guitar. It’s a musical, so the songs will blend into what’s going on in the environment.”