The dynamics of snow removal in Hawkesbury 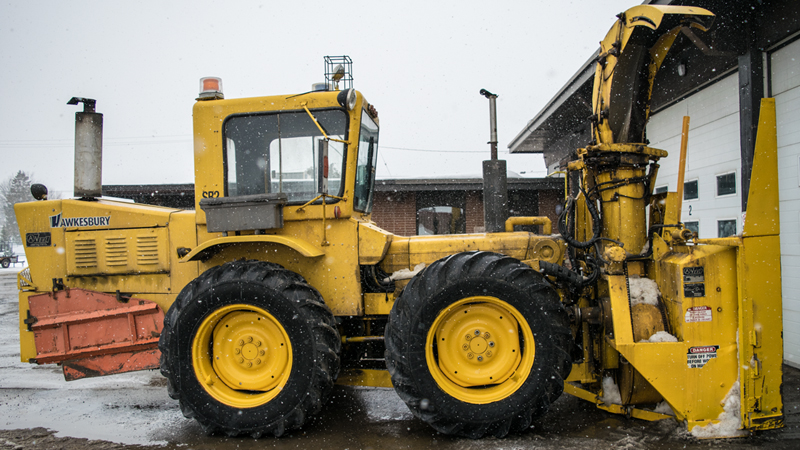 Winter 2017-2018 has been quite the ride so far, with scattered, heavy snowfalls interrupted by the occasional temperature fluctuation.

It’s during seasons like this that snow removal goes from being “kind of taken for granted” to being a hot topic.

At the Town of Hawkesbury’s February 12, 2018 council meeting, Mayor Jeanne Charlebois stated that she had recently been receiving calls from residents concerning snow banks and, consequently, snow removal.

“The snow removal process is started after a snowfall of 7 centimeters or more,” said Lavoie.

“We usually start the night after by pushing the snow where cars usually park. The next day, we start removing it. We prioritize downtown, because of its businesses, as well as major arteries and school zones. Then we do the rest of the 30 kilometres of road with sidewalks. The snow for all these areas is loaded onto trucks and disposed of elsewhere.”

“We have access to approximately 10 trucks, which means that the 30 kilometres of road lined with sidewalks should be cleared within 48 hours following a snow fall of 10 to 20 centimetres.”

“Once all of that is done, we proceed with widening the roads without sidewalks. This is done once the snow banks reduce each lane’s width to less than 3.5 meters.”

Those keeping up with the numbers are probably wondering when the process allows for snow removal on the remaining 70+ kilometers of sidewalk-less streets and roads.

“We only have one snowblower and our employees are already working full-time, if not in overtime. The remaining snow is removed whenever we have spare time. Remember, it’s not just about snow removal, we also salt and de-ice the roads and spread sand on many parking lots between snowfalls.”

The Public Works team has nine employees who contribute to snow removal, five of which are on an “on-call” rotation, 24/7, meaning that one of those five employees must be available. Since December, the team has been working 55 to 70 hours, seven days a week (day and night), to keep Hawkesbury’s road system safe during one of the harshest winters of the last decades.

For those who sometimes think the town has forgotten about them, Lavoie offers this reminder:

“We can’t forget about the garbage and recycling collection schedule. We have to work and consider this in order to remain efficient.”

So far, this year, Hawkesbury has seen seven major snow removal operations, totaling approximately 400,000 tonnes of snow for the season.

And it’s only February.