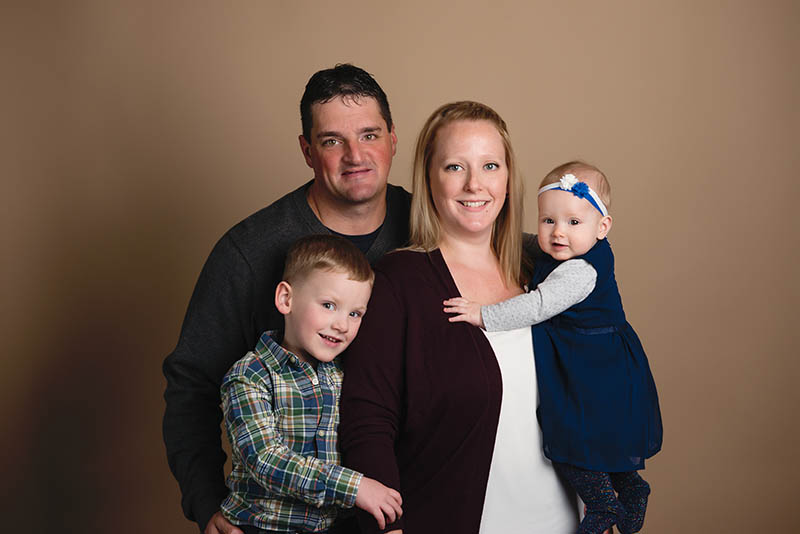 Speaking with Bert MacLennan as he wages his fight against cancer, it is obvious that the whole thing is still sinking in.

A doctor’s appointment followed by tests on December 8 led to a cancer diagnosis on December 20. MacLennan underwent a first round of chemotherapy in January and was on a two-week hiatus before another five-day round when he spoke with The Review this week.

MacLennan says that his diagnosis with liposarcoma and then having to stop working while undergoing treatment has given him time to think. And, for this man, who says he doesn’t like to sit still, that quiet time isn’t exactly welcome.

“When I look back, I was always working. I am the type of guy who is always busy, always doing something,” says the 41-year-old, who owns Bmak Excavation and runs a 100-acre cash crop operation on the family farm, located just outside of Vankleek Hill.

MacLennan says that the cancer diagnosis has given him time to wonder about a lot of things.

“I have had time to think about all the time I put into work. I’ve never had a lot of money and have always worked for what I have. It’s alright to have money,” he says, but this experience is making him re-evaluate the amount of time he devoted to work.

“This changes how you look at life big-time. It opens your eyes,” MacLennan added.

“You can be good one day and the next day, you’re not. It’s been hard to take in,” says MacLennan. He says that having originally booked a doctor’s appointment about a sore knee, hearing that there were two tumours on different parts of his leg and receiving biopsy results which showed that cancer was present, was completely unexpected.

“Somehow, I never thought it would happen to me.”

Since starting his chemo treatment in January, MacLennan became more active on Facebook, at the suggestion of his wife, Karla. Although at first it was just something to do, posting a few photos sparked an outpouring of community support and good wishes, which MacLennan and his wife, Karla Barton, agree is overwhelming, but in a good way.

MacLennan is more at ease helping others than accepting support. In addition to the dozens of Facebook messages, people are always stopping by at their home to offer support.

“You grow up around here and see it all the time — that the community is there when someone needs help. But it is very different to be on the receiving end,” said Barton.

“You know you have friends and family, but even acquaintances are coming forward to help. It’s a really nice feeling, in a bad situation,” Barton said.

MacLennan says he has shut down his business as he undergoes cancer treatment.One way the community is supporting the family is with a fundraiser/silent auction set for Saturday, February 17. “Diggin for Bert” takes place at 8 p.m. at the Vankleek Hill Community Centre. A friend he has not seen in 20 years will be flying in from the west to attend the event.

MacLennan has had his own company for about seven years, but has about 22 years of experience in the construction world. He spent six years working on pipelines in the tar sands, for example. Heading west and trying his hand at work out there was something he wanted to do before settling down with his wife and having children.

He says he headed out there with a bit of cash, stayed in a hotel briefly while he took courses and then landed a job.

He refers to those years as the highlight of his career, but after a few years, he returned home to be with his wife and started his own business. Now, he and his wife have two children: a nine-month-old and a four-year-old.

Just last week, he said, he was in a kind of quarantine at his own home when both of his children were ill. While undergoing treatment, he cannot get sick, he says, yet he talks about discomfort and side effects in a pretty dismissive manner.

“There’s nothing you can do about some of those things.”

As for choosing to take treatments to combat the cancer, he says, “You can’t do nothing — you have to fight for what you’ve got.”

Staying positive and being optimistic are a big focus and family and friends are at the centre of that, he says.

When he is waiting at appointments or for his treatments in Ottawa, he says he is saddened to see people who appear to have no support networks. He described one seemingly-nervous woman he saw recently in a waiting room, who told the nurse she had to leave, after waiting just 15 minutes.

“I felt terrible because she had no one with her, no one to be there with her through this. I am very fortunate,” he said.

MacLennan said he was open about his diagnosis from the start; he has no wish to hide anything.

He was a bit reluctant when word reached him that a fundraiser was in the works. But he gets that people want to help, and that this is one way for them to do just that.

As the three rounds of chemotherapy progress, MacLennan’s doctors are keeping an eye on small spots in his lungs. It is too early to tell if these spots, which are too small for biopsy, are related to his cancer, or not. In the meantime, he and his family are hoping for the best.

At the end of the interview, we asked MacLennan if he had any advice to share. Here’s what he said: “Don’t take any of it for granted. Enjoy every bit of it.”

How you can help: The February 17 fundraiser starts at 8 p.m. at the Vankleek Hill Community Centre at 36 Mill Street in Vankleek Hill. There will be a silent auction. Music is being provided by Fridge Full of Empties and Hadrian’s Wall.

Knox at Night (at Knox Presbyterian Church in Vankleek Hill) takes place on February 25 at 6:30 p.m. and the offering collected during this evening church service will be donated to Bert MacLennan and his family. These Sunday evening services are a recent addition to the service schedule at Knox Church. There is time for fellowship after the worship service.