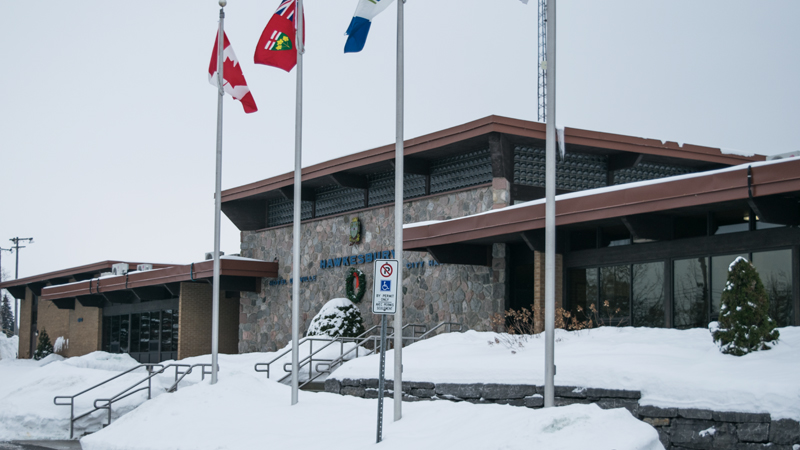 The Town of Hawkesbury is taking measures to halt the depletion of the Buildings and Inspections department’s reserve fund. Photo credit: Cedrik Bertrand

The Town of Hawkesbury’s Buildings and Inspections department has geared up to handle additional work during the expansion of the Hawkesbury and District General Hospital (HDGH). But aside from that, there has been little residential growth in Hawkesbury during the past few years. While a significant reserve fund was created thanks to a one-time injection of funds from building permit fees for the HDGH expansion, the reserve fund is dwindling as these funds are being used for the building and inspections’ department’s operating costs. But that was to be expected, for a project of this size. The Review’s Cedrik Bertrand recently met with Hawkesbury Councillor Michel Thibodeau and Jean Claude Miner, Chief building official for the Town of Hawkesbury, to take a closer look at how it all works.

On January 15, Hawkesbury Councillor Michel Thibodeau underlined the issue of the depleting Buildings and Inspections department’s reserve fund.
The reserve fund is a by-product of Bill 124, which was adopted in 2002. The bill brought major amendments to the Building Code Act of 1991, with the purpose of improving public safety while increasing the efficiency of building code enforcement.

To accomplish this, building departments were to become self-sufficient by way of a reserve fund created through amassed revenues. These revenues are mostly derived from building permit fees.

“From 2006 to late 2013, the department managed to successfully finance itself,” said Thibodeau.

“Then, in 2014, a permit was issued for the hospital’s expansion. Thank God! That year, the reserve fund saw a major surplus since that permit was very expensive.”

Indeed, by the end of 2014, the Town of Hawkesbury’s Buildings and Inspections department’s reserve fund was at a surplus of $771,756, with approximately $732,000 of said funds stemming from the hospital’s permit fees alone.

Such permits are not a common occurrence. While 2014 generated interesting revenue in terms of issued permits, the revenue total for the following year, 2015, was a mere $152,314 while expenses totaled $337,867. Additionally, 2016 did not fare much better and since 2014, the town has been tapping into the reserve fund at an average rate of $183,000 a year to offset its building and inspections department expenses.

Granted, these figures may seem unnerving at first glance. However, they must be put in the proper context, according to town officials. With regard to the hospital building permit, Jean Claude Miner, Chief building official for the Town of Hawkesbury, had this to say:

“It might seem like a lot of money, but if you look at it from another angle, it’s the equivalent of issuing approximately 150 permits. That’s a lot of inspections.”

For Miner and his department, work doesn’t stop once the permit is issued and paid for.

“A permit isn’t just permission. Even though the permit for the hospital expansion was issued four years ago, I’m still doing daily on-site inspections. These projects can last five or six years, so you need funds to pay for inspections over several years. The permit was evaluated with this in mind. It wouldn’t be fair to take taxpayers’ money to pay for these inspections.”

Miner indeed dedicated a lot of time to the hospital expansion project. For the Buildings and Inspections department, this meant the addition of a new team member, bringing their full-time equivalent to 2.5 employees plus benefits.

According to Miner, the department still requires occasional assistance to compensate for his time spent at the hospital construction site.

“We had to seek outside help in the evaluation of permits for big commercial projects, such as Leclerc’s expansion on Aberdeen Street. This is also part of department expenses and taps into the reserve.”

While all this explains how the reserve fund is being spent, there is still the issue of replenishment.

“If we had growth, if we issued more building permits, we wouldn’t have to tap into the reserve funds. Sadly, it isn’t the case,” said Thibodeau.

While the Town of Hawkesbury has seen the occasional growth spurt in the last decade, the last three years have been particularly difficult, especially in terms of residential construction.

“We haven’t seen any major development in the last few years,” said Miner. When asked if he was surprised by this fact, he added “No. If you have no lots, you can’t build any new residences.”

Despite the issues of available space and developer reticence, Miner remains hopeful.

“There is talk of an upcoming development of approximately 50 lots in the west end of town for 2018. It would help a lot.”

In an effort to stymie the depletion of the reserve fund, the Buildings and Inspections department will completely change its method for evaluating the cost of building permits. If approved by council, the new system should come into effect in February 2018. For more information on this, refer to the related story “Hawkesbury’s new method for evaluating building permits coming in February”.

According to Miner, changing the way building permits are evaluated is a step in the right direction.

“I’m very aware that our revenues could be higher. This year might be tough, but we should recover after that.”

For added perspective, let’s not forget that the reserve fund was created for the department’s expenses. Simply put, it is meant to be spent. To reinforce this point, Miner states:

“Reserve funds shouldn’t be huge. If every year ends with a large surplus, the provincial government will ask you to lower your rates. In our case, the government can clearly see that we are using our reserve funds to pay for our expenses. Money shouldn’t be piling up in a reserve fund; it must eventually be spent by the Buildings and Inspections department.”

2018 will be an interesting year for the Town of Hawkesbury, with budgets looming around the corner, the adoption of the new building permit evaluation method and an upcoming election.

For Council member Michel Thibodeau, 2018 marks the end of a second term.

When asked if he considered running for a third, Thibodeau said that his mind was already made up.

“I won’t be coming back. I want to spend more time with my family and I believe I’ve accomplished what I set out to do back in the election.”
Thibodeau’s goal was to improve the town’s finances.

“In the last four years, the cost of police work has dropped by $1,000,000. That money helped pay for infrastructure work without having to rely on financing, thus helping to keep taxation rates fairly steady.”

“Every taxpayer has a right to know what’s going on in the town hall. When people ask me for numbers, I never hesitate to share the information. The municipality’s financial statements are public domain.”

Thibodeau’s second term as Council member will end on November 30, 2018.