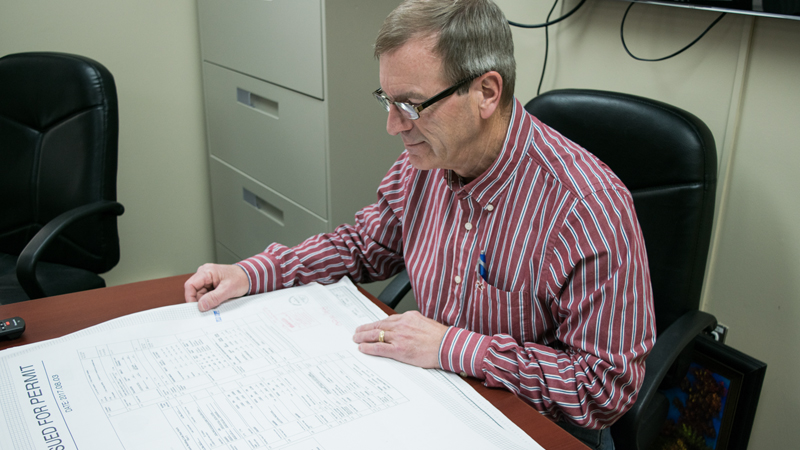 Jean Claude Miner’s evaluation method will not only generate more revenue for the municipality, but also address the issue of the depleting Buildings and Inspections department reserve fund. Photo credit: Cedrik Bertrand

During a public meeting held on Monday, January 15, 2018, a new method for evaluating building permits was brought to council during a presentation given by Jean Claude Miner, Chief Building Official for the Town of Hawkesbury.

The last time the system was revised was in 2008 and many things have changed since then in regards to growth and the overall cost of living. This new evaluation method will not only generate more revenue for the municipality, but will also address the issue of the Buildings and Inspections department reserve fund, which is being depleted. For more information on that, please see the related story “Addressing the issue of the Buildings and Inspections department’s depleting reserve fund“.

“Before, when applying for a permit for a new construction, we based our decision on a pre-established grid and on information given by a contractor, such as estimated costs,” said Miner.

This method had several flaws, such as outdated evaluation grids and sometimes-biased information handed in by contractors.

“We had to evaluate the permit ourselves, which meant there was a lot of back and forth. I had to make the final call,”said Miner. This new evaluation method will indeed eliminate many variables from the evaluation.

“To avoid all that, we’ll use a system based on square footage. Many towns in Ontario use that system,” said Miner, adding that, “it has clear rules regarding size and usage and is no longer based on the estimated cost of construction. It’s fair to everyone.”

In the 2008 system, the formula started with the construction cost variable. For every $1,000 found in the given construction estimate, $12 was added to the permit fee, on top of the basic amount of $100. In other words, the permit fee for a project with an estimated cost of $100,000 would have been $1,300.

The new system is much different. Let’s take, for example, a 1,000-square-foot residential dwelling unit. The basic amount would be $1,600, added to a rate of $0.63 per square foot (which translates to $630) for a total of $2,230 in permit fees. Simply put, if the new construction is a 1,000 square-foot residence, the permit will cost $2,230 no matter what the construction costs are estimated to be.

“The basic amount, the constant, is based on construction plan evaluation, which always takes the same amount of time within a category. Inspection, however, takes longer as the construction grows larger. The added rate per square footage compensates for the costs of those inspections.”

This method is by no means revolutionary. Champlain Township, among others, uses the same system.

“I wanted a system that was comparable with other municipalities across Ontario,” stated Miner.

“The new rates are based on projects evaluated in the past and on rates found elsewhere in the province. I’ve sampled around a dozen towns that use a similar system and calculated an average.”

During the January presentation, council asked Miner if these new rates could potentially discourage any newcomers from choosing Hawkesbury as opposed to its neighbours. Miner had indeed anticipated the issue.

“I’ve made sure our new rates didn’t surpass those of neighbouring municipalities. In fact, the rates will increase over the next few years until we catch up to them. I don’t think our new rates will discourage anyone from building. Development fees might have a stronger impact on the issue, if we had any, but permit fees tend to be added to the overall construction cost without a second thought. It’s not much when spread over ten years.”

Development fees are not yet a reality for the Town of Hawkesbury. These fees, added to the cost of a building permit, are meant to represent part of the capital paid over the years by taxpayers for a specific service. Simply stated, it brings developers up to date on infrastructure payments. According to Miner’s presentation, a single-storey, 1,000 square-foot house built in Rockland would have a $14,500 development fee added to the cost of the permit.

According to Miner, the new evaluation method should be made official during the January 29, 2018, council meeting. “Permit demands received before the new calculation method is approved by council will be evaluated with the old system.”

For those interested in previewing the new rates, most of them can be found within a draft of Miner’s presentation which was included in the publicly available January 15 Hawkesbury council meeting agenda (https://hawkesbury.ca/en/town-hall/the-municipal-council/council-minutes).