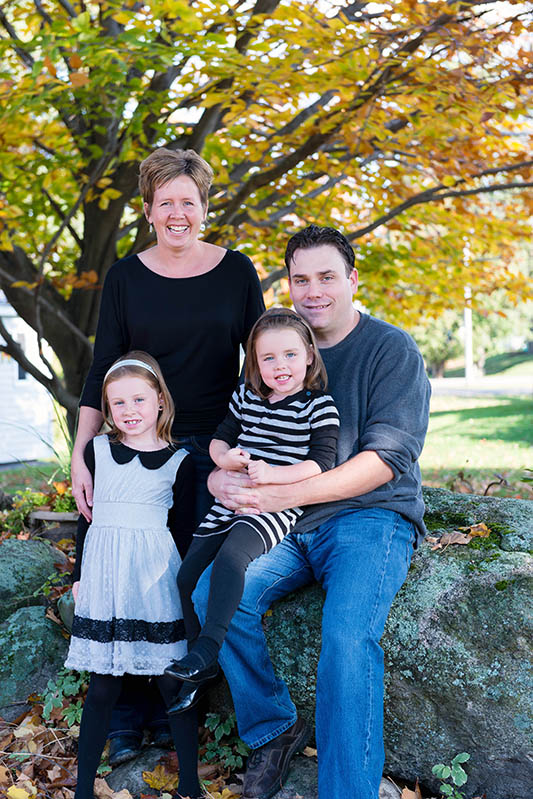 Troy Carkner (at right) is seeking his third term as Vankleek Hill councillor. He is seen here with his family: wife, Trina and daughters Kaileigh and Lindsay.

For long-time Vankleek Hill resident Troy Carkner, it seems quite simple. Being a municipal councillor is a way to give back to the community and a way to help people.

“We can’t say yes to everything,” he is quick to add. And as a councillor, he is only one out of nine (eight councillors and a mayor) at the table voting on decisions, he says.

“But it does feel good when you are able to do something to help someone.”

Sometimes, even the council as a whole cannot make a decision, Carkner adds. During his two four-year terms of office, he has learned a lot from staff and fellow-councillors about regulations.

A stand-out for him was attending a conference about water management.

“That course was a real eye-opener,” says Carkner, who said that the Walkerton experience, where people died as a result of the municipality’s badly-managed drinking water system, was outlined as part of the conference.

Since then, Carkner pointed out, new drinking water regulations have been put in place, but what many people do not realize is that municipal councillors are personally liable for their municipality’s drinking water system.

“We are responsible, but we don’t have control over the day-to-day operations. That’s why it is so important to make sure there are competent people operating the water system,” Carkner explained, adding that the Ontario Clean Water Agency has been operating Champlain Township’s water systems for many years.

“We have to trust and have faith in the people operating our system,” Carkner said.

Many items are beyond a municipality’s control and Carkner says that in situations such as the Ontario Provincial Police costing, it was frustrating for councillors.

“There are cases where the province can just say, “Here you go,” and we’re at the bottom of the pile. In the case of increased OPP costs for our township, we had no choice but to pay,” Carkner pointed out, and it’s not to say that the OPP are not doing a good job, he added.

“But that was a huge increase to our population.”

One thing Carkner is working on is encouraging others to seek elected positions on municipal council. There will be a vacancy in the Vankleek Hill ward, as former Vankleek Hill councillor Paul Emile Duval is seeking the mayor’s post. Champlain Township Mayor Gary Barton will retire from politics at the end of this term in 2018.

Something else on Carkner’s to-do list is to shadow a business as it builds or expands and see exactly how the process unfolds from the time of application for a building permit to completion. “Our building department is enforcing provincial regulations, and I don’t claim to understand all of the building code, but I would like to see how the process works for local businesses or builders,” Carkner commented.

While he does not receive calls from residents on a weekly basis, he does wish residents could add to their knowledge of municipal processes.

“Often, someone is upset about something but they don’t have all the information or they have the wrong information. We don’t have to agree about everything, but attending council meetings and understanding what is behind decisions would be of use to residents, I think.”

Another project Carkner is thinking about is enhancing Wood Hills park (in Vankleek Hill’s subdivision), somehow.

That is a park where Carkner himself played as a child, having grown up in Vankleek Hill in nearby Hillview Circle.

Carkner says he left the area only to attend college and then spent a year working in Winnipeg for Air Canada before being transferred to Montreal and then, 10 years ago, to Ottawa. He has been with Air Canada for 19 years.

Vankleek Hill is fortunate in that there are a lot of young families which have one or more members willing to commute. For many families, commutes that are not daily seem to work best.

There are more opportunities in the city, in many cases, Carkner noted, but the ideal situation is when one partner can find sustainable employment locally.

How to become a candidate

Candidates can submit their nominations for municipal posts between May 1 and July 27.