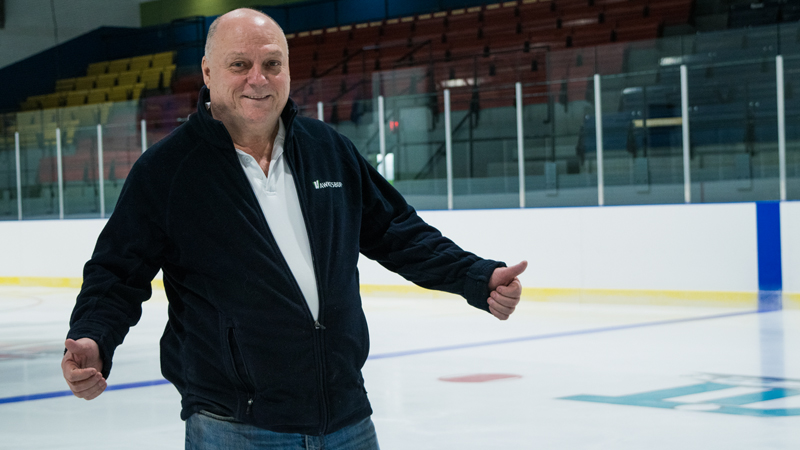 The weekend of January 12, 2018 saw the reopening of the Robert Hartley Sports Complex ice rink. The Hawkesbury facility had been closed for a little over three months, after one of the complex’s dehumidifiers malfunctioned.

As was stated in a Review article published on October 31, 2017, a call from a municipal employee was received on September 20, stating that mold was found in various places in the ice rink. Council then mandated the superintendent of public works, Alain Lavoie, to contact experts from ASCO restoration to investigate the mold and report on how bad the situation was. Shortly after, the experts were on-site and confirmed the presence of mold right away. (https://thereview.ca/2017/10/31/hawkesburys-ice-rink-to-be-re-opened-by-end-of-january-2018/)

“One of the dehumidifier’s turbines had been causing problems,” said Gerald Dicaire, Superintendent of Municipal Buildings.

“Once the 2017 budget was approved, we ordered the components needed to fix the unit, but those components are hard to come by and delivery was expected to take eight to 10 weeks.”

The aforementioned components were indeed received in early September. “When the shipment arrived, we noticed that some pieces were still missing,” said Dicaire.

Sadly, that wasn’t the only surprise September 2017 had to offer, with temperatures reaching 31, 32 degrees Celsius. “That, coupled with a broken dehumidifier, caused serious condensation,” said Dicaire, adding that, “It’s not just us. Those temperatures caused humidity problems at ice rinks all over.”

Air quality experts were then contacted to run tests in the ice rink. The samples collected were sent to the Eastern Ontario Health Unit for analysis. After confirming the presence of mold, the ice rink was closed off, keeping the rest of the arena free of contamination.

Making the best out of a bad situation

Decontaminating an arena involves more than just cleaning the air. Despite the amount of work that needed to be done, what started off as a serious issue may have been a blessing in disguise for the 40-year-old arena.

“The bleachers and ceiling beams were cleaned and disinfected, the original boards were destroyed; we now have a brand new arena,” said Dicaire.

In early November 2017, once the decontamination process was well under way, a tender to have the new rink boards built was opened. Out of the three companies that bid, Sound Barriers, a Mississauga-based wall and ceiling company, was chosen based on pricing and availability.

“Construction started on December 10,” said Dicaire, adding that “boards, window shields and protective nets were all redone. Finishing touches, like paint, were done by our employees.”

As stated in the October 31, 2017 edition of The Review, the original window shields did not conform to regulations and their height varied from two to four feet. This issue had been brought forward by Hawkesbury’s Manager of Recreational, Community and Cultural Activities, Nicole Trudeau.

When asked about the ice rink’s new window shields, Dicaire had this to say: “Window shield height is not regulated by law. However, it is recommended that the height be at last four feet. It may seem like overkill, but we went for six feet all round.”

Dicaire seems confident that the issue was not only resolved, but that precautions were taken to ensure that problems like mold would not resurface. “Everything is now built with galvanized metal or plastic. If something like this happens again, mold and rust won’t be an issue. Our ice rink is cutting edge. When people walk into the new arena for the first time, they’ll say ‘wow’.”

When asked about the total cost of such an endeavour, Dicaire stated that the final amount is unknown and that the matter is currently in the hands of the insurance companies.

During the closure, the Vankleek Hill arena was used by certain groups, including the Hawks.

“We were happy to accommodate these groups and help out,” stated Lisa Burroughs, Director of Parks and Recreation for Champlain Township.

“It didn’t affect evening rentals and filled some holes we had during the day.”

For Champlain Township, the Hawkesbury ice rink closure represented approximately 20 hours of extra rental revenues per week, based on varying daytime rates. “People were happy to see the arena full all the time,” said Burroughs.

To mark the reopening of the ice rink, the Hawks, dressed in their new jerseys, hosted the Carleton Place Canadians on Friday night. The facility was available to the public starting Saturday, January 13.