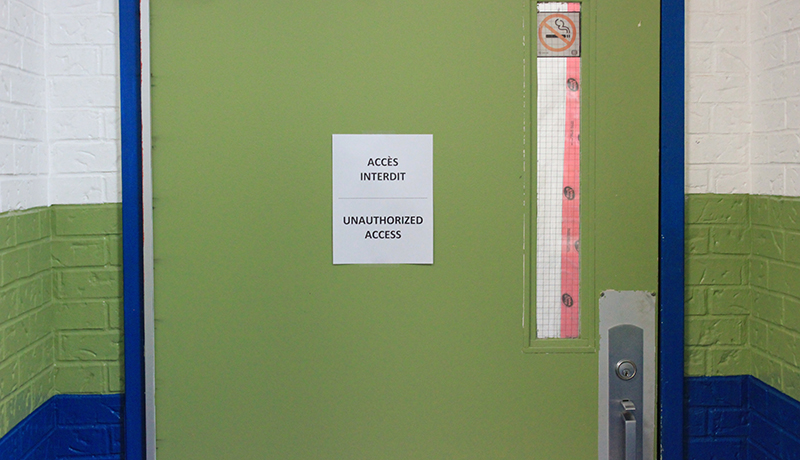 The ice-rink at Robert Hartley arena will be reopened by the end of January, according to superintendent of public works, Alain Lavoie. The Hawkesbury Hawks have been away from home since September. Once all the work is done, the Hawks will have brand new boards to slam their opponents in.

“The decontamination is going well, all conductors were cleaned. Ninety per cent of the ice rink is done. We passed air tests in the change rooms and everything is good. All that is left is part of the roof which will require scaffolding to reach those parts and a few hallways. By Friday (November 3), we should be all done with the decontamination,” reported Lavoie.

“After the decontamination we will use a special vacuum to suck up all possible remaining spores. This will be done three times. In other words, every square inch will be cleaned three times to make sure that we pass the final air test,” added Lavoie.

All the old wooden rink boards have been removed and will be replaced with new ones. Nicole Trudeau noticed a few months ago that the glass in the corner of the rink were not six feet tall as regulation requires. This issue will be addressed by building new rink boards and installing the proper protective glass.

Lavoie opened a tender to have the new rink boards built. Three companies bid on the tender and their documents will be opened on November 3. Two options were featured in the tender for building the board; one was using the existing structure and build custom galvanized steel boards or a complete rebuild of structure and using aluminum boards.  The bidders’ documents will be reviewed by Lavoie and his team and subsequently presented to council on November 8, just before a budget meeting.

Building the boards will take three weeks and two more weeks to install them. Making the ice will take approximately 14 days which brings the project to mid-January or, according to Lavoie, worst-case scenario, to the end of January.

On September 20, Lavoie received a call from a municipal employee saying that mold was found in various place in the ice rink. Lavoie then called a experts from ASCO restoration to investigate the mold and report on how bad the situation was. Thirty minutes after the call, the experts were on-site and confirmed the presence of mold right away. The affected area was roughly 100 square feet.

After realizing the gravity of the issue, Lavoie immediately contacted air quality experts to run tests in the ice rink. The samples, collected by the air quality experts, were sent to the Eastern ONtario Health Unit for analysis. This was all done on the same night of September 20. After confirming the presence of mold and the gravity of the situation, Lavoie closed off the ice rink so as to not contaminate the rest of the arena.