From dairy to poultry, the next step for Wylie family farm 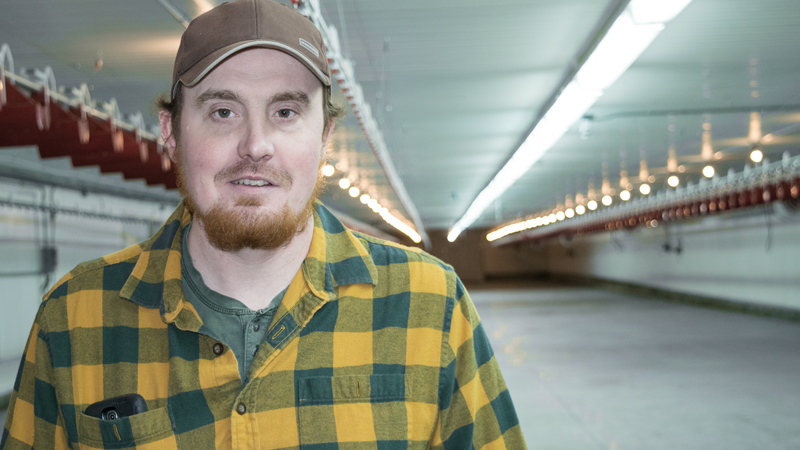 Shawn Wylie and his family allowed any and all to roam their new barn, before the arrival of its new tenants on the following week. Photo credit: Cedrik Bertrand

During an open house held at the Wylie Farm on Friday, January 5th, 2018, some 150 visitors were allowed  to roam their new barn before the arrival of its new tenants the following week.

When asked about this special occasion, Shawn Wylie, who owns and operates the St-Eugène-based farm alongside his father, Donald Wylie, said: “A lot of people wanted to see the barn. It’s a retrofit of the existing barn.”

Recently, the Wylie family completely changed the nature of its historic business from dairy farming to broiler poultry farming. “We sold the dairy house back in the spring and we’re converting to broilers,” said Wylie.

“The change will make it easier for us,” explains Wylie. “Basically, one person can run the operation, so either my dad or I can do it.”

The open house is indeed a special opportunity, since public access will become a thing of the past even before the arrival of the first flock, as animal welfare is a priority.

“Everything is free-run. Biosecurity is high. Our nutritionist ensures that the birds have all the adequate feed they need,” says Wylie, adding that, “it’s an exact science.”

The first flock is set to arrive early in the second week of January 2018, with a headcount of 16,500 chicks. Their stay is expected to last approximately 34 days, until they reach an average weight of 2.1 kilograms.

“For now, we’ll be supplying Avicomax, which basically supplies Costco,” said Wylie, when asked if the farm had a buyer lined up for its first flock.

Marie-Ève Lamarche, a specialist from New-Life Mills, has worked with the Wylie family since the summer of 2017 as both supplier and consultant. “It’s a beautiful barn! I’m very confident and can’t wait to see the first chicks arrive.”

Among those present at the event was Sylvain Racine, District Manager of Agriculture Services for Eastern and Northern Ontario for TD Canada Trust.

“It’s a good investment to make. It ensures continuity for the farm,” says Racine, restating that, “a broiler farm requires a lot less manpower to operate than a dairy farm.”

According to Racine, this type of change is usually considered when talks of succession arise.

“In the last 5 years, several dairy farms across the province converted to meat or egg production,” states Racine. “We see it happening more and more in Eastern Ontario.”