François St-Amour sworn in as UCPR Warden for 2018 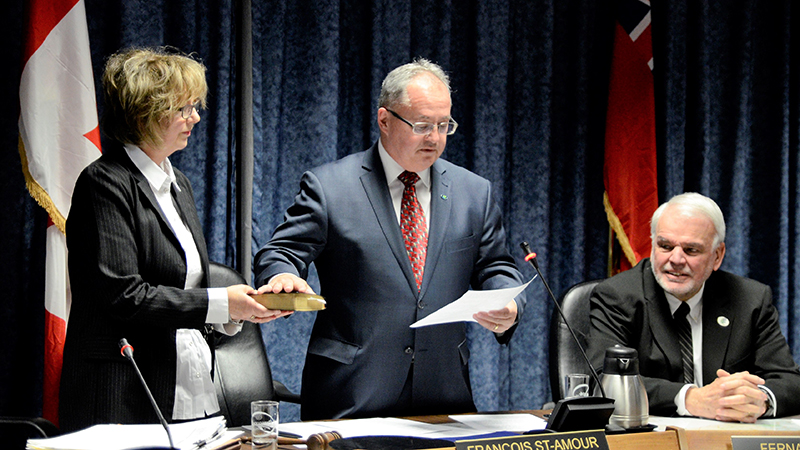 François St-Amour, Mayor of The Nation Municipality, was elected by acclamation as the 2018 Warden of the United Counties of Prescott and Russell (UCPR). Photo credit : Justin Bromberg, UCPR

François St-Amour, Mayor of The Nation Municipality, was elected by acclamation as the 2018 Warden of the United Counties of Prescott and Russell (UCPR).

This coming year represents Warden St-Amour’s second term as the head of the regional council, having previously held the position in 2012. Russell Township Mayor Pierre Leroux and Clarence-Rockland Mayor Guy Desjardins proposed and seconded the nomination, respectively. Mr. St-Amour has been involved in municipal politics since 2003, and has served as mayor since 2010.

During the traditional swearing-in ceremony held on December 20 in the County Council chambers, Warden St-Amour addressed the priorities of his upcoming presidency, namely, support for the new direction of the UCPR’s Economic Development and Tourism Department, which will address gaps and opportunities in the electricity and natural gas networks, the improvement of regional infrastructure, and the development of local municipalities’ commercial and industrial sectors.

“I also plan to ensure a continuity of certain regional projects and advocacy from 2017, such as the construction of the new Prescott and Russell Residence, the widening of County Road 17, our ambulances being dispatched in the City of Ottawa, fire dispatch communications within our eight municipalities, and the management of social housing and domiciliary hostels in Prescott and Russell,” Warden St-Amour stated during his inaugural address.

“It is a privilege for me to take on this role, for a second time, at the head of our Council, which must continue to work together, from a regional perspective, to move forward with a united voice and to advance the priorities of Prescott and Russell, and all of Eastern Ontario.”