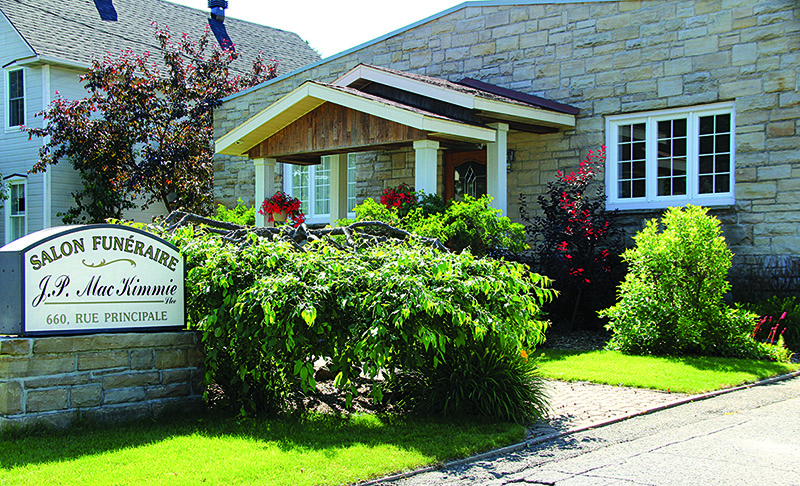 At the end of this year, MacKimmie Funeral Home will close its doors, ending the history of the 157-year-old Lachute business.

For Richard MacKimmie and his sister, Bonnie, it is the end of a fifth-generation family business and according to Richard, the closure means the loss of yet another of Lachute’s businesses owned by a longstanding English-language family.

In a conversation with The Review, Richard said that the decision to close came about for several reasons. The exodus of many anglophones to Ontario during the past few decades led to a decrease in local clientele for the funeral home, Richard noted. And unlike generations past, there were no young family members interested in becoming part of the family business.

“My daughter works in Montreal and she is not interested in coming back here to the family business,” Richard said.

But it was the death of a close friend which brought Richard to a clear decision.

“My sister has been a mainstay of this business, keeping things going with me. But then I got to thinking of the pressure that would fall on my sister if something were to happen to me. And I thought: now is the time to make a decision.”

The funeral home business is a 365-day-a-year job, Richard points out. And while he and his sister both grew up with an understanding of what it takes, it does take stamina and strength to do the job.

“I have buried a lot of people. And it can be tough. When you know people, when people you know lose their children . .  and you are dealing with people at the worst time in their lives. They are understandably emotional and we are trying to help them and make sure that everything is right at a stressful time for them,” Richard continued.

He says that one thing he did learn from his father, was to take a break and recharge.

“I do vacation a lot,” Richard said, noting that he spends a few months each year in South Africa. During his time away, his sister has handled things on her own.

For her part, Bonnie says that she, too, grew up with the business.

“It is seven days a week, but I think this business was in my blood. I had left Lachute and had been working at a job, which I really didn’t like. I came back in 1989 and it was supposed to be for a year, but I stayed. I will, for sure, miss the people,” says Bonnie.

The business, founded by the McNabb family in 1850, was purchased by Richard MacKimmie’s great-great-grandfather in 1860. Richard says that MacKimmie Funeral Home has been serving a predominantly English-speaking clientele in the Lachute region, extending west through the Arundel, Weir, Harrington region to clients as far away as Gatineau and Hull.

Richard and Bonnie’s childhood included being around the funeral home. Richard remembers going on the road at eight or nine years of age to help set up graves. At the age of 10, 11, or 12, he remembers being present for removals from homes.

Although young, he says that this was just part of life in his family.

“People died at home and we would go to a home when someone had passed away. Times have changed and these days, more often than not when someone dies at home, an ambulance is called in order to transport the person to a hospital first,” Richard said.

“I would be at the funeral home and the embalmer would arrive and say hello and I would say hello and that was just the way things were for us,” Richard said.

Looking ahead, Richard says that the family will retain the headstone business from an office at the rear of the funeral home building.

Pre-arranged funerals will be transferred to Salon Funéraire Roland Menard. Richard says that business, too, is a family-owned business and that he has known Roland Menard since they attended school together. Roland Menard grew up in the trade also and came into the business in the same manner as Richard did.

MacKimmie Funeral Home is located at 660 rue Principale in Lachute.  While the telephone number and business entity will exist for some time, the business will close at the end of 2017.