Ospreys are coming back to this area: Nature Society 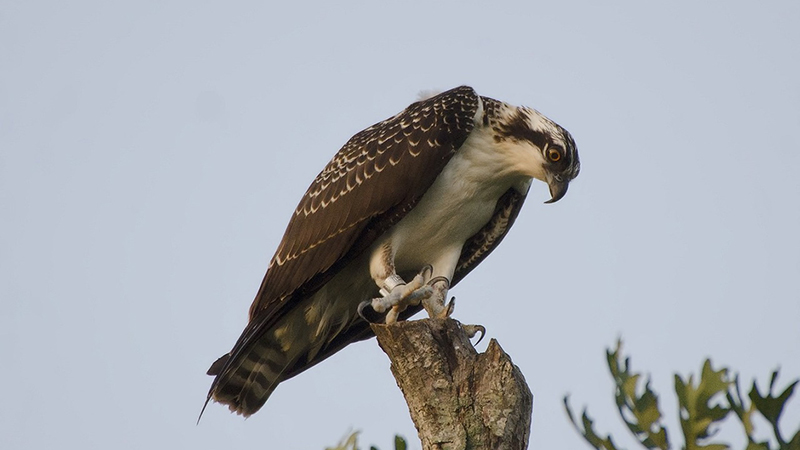 The Vankleek Hill & District Nature Society inaugurated its new osprey nesting platform in Voyageur Park on December 1. The nesting platform was built by Maxime Cloutier, a member of the society. Steven Rutherford of Sproule Powerlines built the foundation and installed the post, so the nesting platform could be attached on top. Both were constructed at an affordable cost.

Ospreys are predatory birds which feed exclusively on fish and must therefore have nests located near major bodies of water such as the Ottawa River. The Vankleek Hill Nature Society hopes that once the ice melts next spring, a family of ospreys will be using the new platform, located on the banks of the Ottawa River.

Ospreys had left the area many years ago and have been slowly coming back, finding nesting areas wherever they could. According to Christine Trudeau, the Vice-President of the society and bird compiler at the Nature Society, their eggshells were weakened because of the use of DDT, now a banned pesticide. The pesticide made the eggshells so weak that the eggs were crushed by the weight of the mother. But lately, the Nature Society has been spotting osprey families coming back to the area on their own and members have been finding nesting areas on structures across the Prescott-Russell Counties.

In 2013, a family of ospreys had a nest in a tree near Wendover, but the nest was attacked by eagles who then took over their spot. The ospreys then moved to the top of the Wendover water tower. One year later, the township decided to repaint the water tower, evicting once again the family of ospreys. After their nest was destroyed, they built a new one on top of a baseball field light. Sadly, a gust of wind from a nasty storm threw the nest to the ground. The ospreys were again left homeless. After learning the ospreys had again lost their homes, the township decided to build a nesting platform for the ospreys.

Ospreys can take up to three years after their birth before being able to mate. It is crucial to have nesting areas that are safe from human intervention. Another family of ospreys chose another baseball field light, this time in Hawkesbury, a sign that the birds, who migrate between the south of the US and our area, are coming back in force.

“We would love to be able to build more of these platforms, but today we managed to inaugurate one in a prime spot and that will, I believe, host an osprey family in the spring. People are always surprised by the amount and variety of birds we have in our area. Today, through collaboration, we can create safe spaces for birds to come back to and be part of our ecosystem,” concluded Trudeau.