Family life at the centre of happiness, according to centenarian 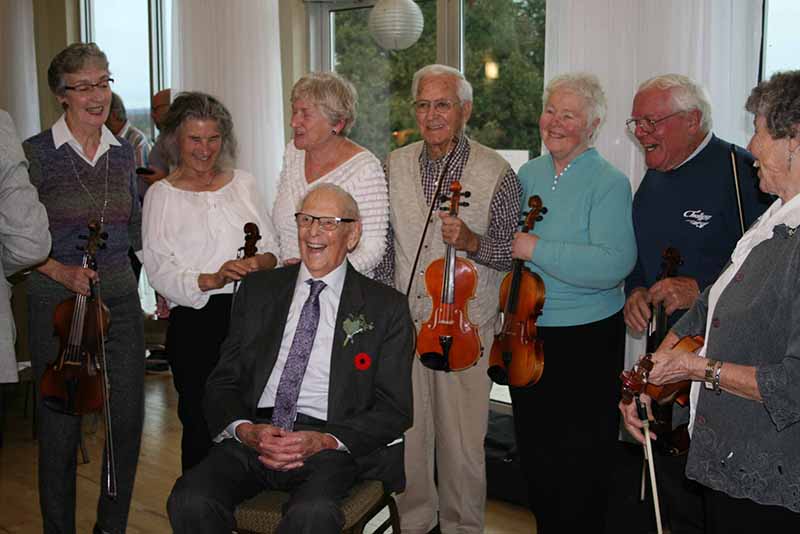 In 1917, World War One was in its third year. The average working wage was 22 cents per hour. The maximum speed limit in most cities was 10 miles per hour.
It was into this world that Allison Leduc was born on October 26 on a farm in East Hawkesbury.
And even if it was 100 years ago, he can still tell you the lot number of his home farm.
Because of this milestone birthday, I visited him at his apartment at Vankleek Senior Citizens Manor in Vankleek Hill.
“I made it!” he said, by way of a cheery greeting. Dozens of birthday cards with “100” on them were nearby.
But as we began, I could see he was a little reticent to talk about himself. Mr. Leduc is a modest man, perhaps a little surprised that I wanted to hear about his life.
Softspoken, with an easygoing temperament, his gentility is from a different time. As he talks about a century of life, hardships are described simply and in short order. He prefers, instead, to recall happy times.
During 100 years, if one thing has been constant, it is that everything keeps changing, according to Mr. Leduc.
Farming is one thing that has changed remarkably in the past century, he noted.
“I was farming in horse-and-buggy days and today, cars are driving themselves,” he says with a smile.
Everything was slower back then, he added, recalling that he had farmed for more than 20 years before having a tractor.
His 160-acre farm, a mile below McCormick’s Curve, was a place where he says he worked hard. But that is just how it was, he adds. It was 1953 before there was electricity on the farm.
Leduc was one of six children born to Daniel and Annie (nee Allison) Leduc. He was one of the five babies born at home, with the help of a midwife. The one baby born in a hospital did not survive.
Today, Mr. Leduc is the last surviving sibling of his family, even if he himself has had a few health problems over the years.
He says that he had a great, young life.
“We went to every dance from Lachute to Green Valley,” he laughed.
If, at times, there was not a lot of money around, there was always gas in the car, he recalled.
Young men paid one dollar at the door to get in to a dance; but the girls did not have to pay anything, Leduc recalled.
He recalls attending dances at the “Old Town Hall” in Vankleek Hill and going to dances in Green Valley every Sunday.
Everything was done more simply and more cheaply back then.
“If you didn’t have a girl to take with you to a dance, you took your sister,” he remembers.
Married in 1956 to Agnes, he recalls dismantling the existing farmhouse and using some of the materials to build a new bungalow for himself and his bride.
When asked what was most important to him over the years, he says that a good family life and having great parents were the source of a lot of his happiness.
“You were always satisfied. You have always been happy with what you have,” said his daughter, Elaine Leduc-Beks, who was present for the interview.
The day came when Allison and his wife sold their farm in 1987 and moved to Vankleek Hill, spending 18 years living on Home Avenue. His wife passed away 12 years ago.
These days, his community consists of the other residents at the Manor in Vankleek Hill and he says his daughters stop in often to see him.
“I like it here,” he says, rhyming off the regular activities at the facility. Mr. Leduc still makes some of his meals (he interjected here that his wife was a very good cook) and attends local church suppers. But now, others drive him to outside events. He gave up driving in February of this year after a small stroke-like incident. Everyone at the manor looks out for each other, he says.
He is not an early riser, joking that he stopped getting up at 5 a.m. the day after he sold the cows. These days, he spends time participating in manor activities, watching television, and, it seems, finding ways to enjoy life – much as he has done for the past century.
“I will stay here as long as I can,” Mr. Leduc says. As we conclude the interview, he reminds me – gently – not to make this story too long.