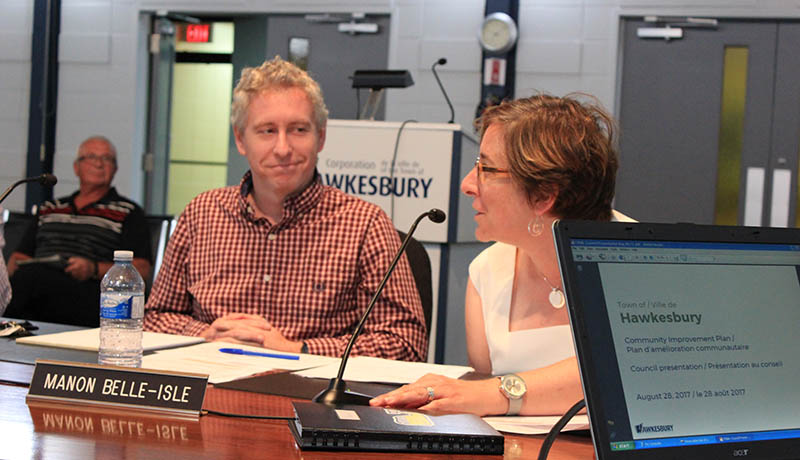 On the town’s website there is a mention to rethink hawkesbury and the Community Improvement Plan will help to do just that.

In early May of this year, council gave the $31,500 mandate to WSP, a professional services firm, to create a CIP to give the town some guidelines concerning its development. A few months later, WSP presented their first draft of the plan to council on the regular meeting of August 28.

A CIP is a planning and economic development tool that municipalities can use to address maintenance, rehabilitation, development and redevelopment of targeted areas. The CIP goals include stimulating private sector investment through grants and loans from the Town, promoting revitalization to attract tourism and business development, develop affordable housing, promote brown field cleanup and redevelopment and enhance streetscape. The plan was presented by two WSP consultants, Nadia De Santis, Senior Project Manager and Stéphane Doré, urban planner.

A draft CIP has been prepared for community review and can be found on the town’s website at www.hawkesbury.ca. All comments shall be received by November 14th, 2017.The town and its consultant, WSP, will be presenting the Draft CIP for discussion at the Public Open House and will be available to answer questions.

The town is inviting residents and business owners to attend this public open house to learn more about this exciting project for the town and to be part of its future. The presentation will be made available on the town’s website following the public open house.

North Glengarry’s CIP came into effect at the beginning of 2016. The plan aims to revitalize Main Street in Alexandria and Maxville. While developing the plan, North Glengarry held public consultations, which were used to help identify problem areas as well as create a picture of what the Main Streets should look like. Participants identified “serious signs of neglect,” empty storefronts, and litter as some problems with downtown Maxville and Alexandria.

The plan favors restoration of the historic buildings in Alexandria and Maxville, offering financial incentives. Private property owners can apply for funding which will cover a certain amount, usually 50 per cent, of building improvements including facades, signage, awnings, and public art and landscaping.

There are also grants available to cover the cost of building permits as well as interest-free loans. In North Glengarry, applications for funding can be approved every month – a special committee meets monthly and its recommendations are voted on by council about a week later. As of mid-July 2016, six projects had been approved in the five months since the process began. The municipality budgeted $50,000 for the CIP in 2016, and a report in July said approved projects represent about $155,000 in improvements.