Dancing doctors up the ante for Zudio’s HGH fundraiser 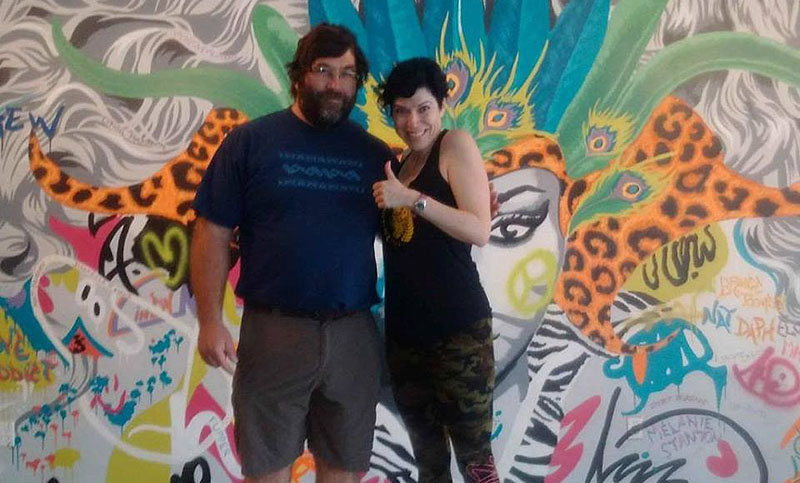 Dr.Richard McCall poses with Zudio owner and manager of the Scrubs event, Louise Stephenson. McCall has put his beard on the line as part of the fundraiser. (Submitted Photo)

With Zudio’s fundraiser for the Hawkesbury General Hospital (HGH) drawing near, local doctors are putting their bodies on the line to help with the cause—in more ways than one.

“They’re really getting into it,” says Zudio owner and event organizer Louise Stephenson. “It’s a lot of fun to see!”

To help with fundraising efforts in connection to the Access 2018 campaign, 30 staff members from the HGH have agreed to get on stage and do some Zumba with Stephenson and 15 of her instructor friends as part of her Scrubs event on October 15. Since launching the fundraiser in August, Stephenson has been collecting donations through ticket sales to the event and through individuals personally sponsoring participating HGH staff members.

But as if the dancing itself wasn’t enough to spur donations, a few of the doctors are upping the ante in a “hair-razing” way.

Dr.Valery Rossbach has announced that if his personal donations reach $1,000, he will wax his legs, chest, and back live on Facebook prior to the event.

A second doctor says he’ll paint his bald head glow-in-the-dark for the event, which is a black-light party.

Not to be outdone, Dr.Richard McCall, the first staff member to sign up for Scrubs in the first place, heard about Dr.Rossbach’s goal and so set a goal of his own. Dr.McCall has said he will shave his “beloved beard” if Dr.Rossbach raises more money than he does. As Stephenson explains, that’s no easy gesture for the doctor.

“Anybody who knows Dr.McCall knows how much he loves his beard. He does not want to shave that beard.”

Stephenson hopes the friendly competition between the doctors will help raise even more money for Access 2018, which aims to raise $4 million to purchase a new MRI machine and a CT scanner through the HGH Foundation.

The Scrubs fundraiser will take place in the Pleasant Corners Public School (PCPS) Gym from 2 p.m. to 4 p.m., at the same time as the HGH Foundation’s Radiotelethon.

Tickets for the event are sold out but until October 8, those who have already purchased tickets can still upgrade their tickets from the $20 level to the $50 “VIP” level or to the $100 “Superstar” level. People can also continue to make pledges to the participating medical staff until October 14. Pledges made to participating medical staff are eligible for a tax receipt (minimum donation of $10).

Funds from the sale of the basic $20 tickets will go towards the purchase of a defibrillator for Zudio, while the funds from the VIP and Superstar tickets, the silent auction, t-shirt sales and sponsored medical staff participants will go entirely towards the HGH Foundation.

Stephenson would like to thank Intersport for sponsoring Scrubs. The sporting good company will cover most of the expenses for the event, allowing as much money as possible to go towards the HGH Foundation.

Scrubs will be the third major Zumba fundraising event organized by Louise Stephenson. Previously, Stephenson created Floor on Fire, where 24 local firefighters jumped onstage and danced to Latin beats to raise money for burn victims. The Floor on Fire event raised $16,670. Her second event involved local Ontario Provincial Police (OPP) officers who also did some Zumba under the “We Got The Power” theme, raising $16,415 for Sacha’s Park in L’Orignal.

For more information, contact Louise Stephenson by email at [email protected] or by phone at 613-330-9678. To make a pledge to one of the participants, visit the donation site at the following link.