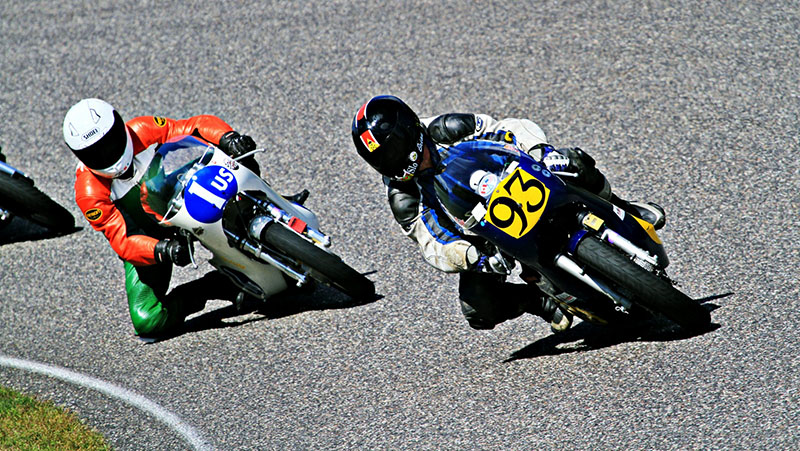 Sporting his signature number 93, Brian Henderson rounds the corner at the Calabogie Motorsports Park. Henderson rode to three podium placings at the Vintage Road Race Association (VRRA) Grand Prix, his second race back from a three-year hiatus and the final competition of the 2017 VRRA season. (Photo: Bill Murphy)

Whatever racing rust might have been lingering since his return to the sport earlier this month, Brian Henderson left it all on the track this past weekend in Calabogie.

Brian Henderson raced to three podium finishes over September 8-10 in the Vintage Road Race Association(VRRA) Grand Prix at Calabogie Motorsport Park, in just his second competition back after a three-year hiatus. The 64-year-old racer took third place in the P1-500 division, third in his class in the P2-Middle weight division, and second in the P1-Open division.

The P1-500 race ended up in a battle between Henderson and three veterans of the sport for the top three spots—current US vintage racing number 1 plate holder Tim Joyce, VRRA number 1 plate holder Paul Brubaker, and two-time Steve Crover Award winner, Dave Coté. Henderson fought hard against the top-rate competitors, earning himself the third place medal in the first final of the weekend.

Next, in the P2-Middle Weight race (including both theP2-Heavy and pre-65-500 classes), Henderson finished third in his class—good enough for fifth overall.

Finally, in the P1-Open, it came down to Brubaker and Henderson for the title. The two pulled away from the rest of the field and, as Henderson puts it, “both of us were in the zone and going for it”. But not all pieces of his bike were ready to make that push; partway through the race, his transmission started to act up, adding an additional opponent to contend with beyond his race rival. Ultimately, despite pushing his bike to the limit, Henderson was unable to over-power Brubaker’s 500 Norton twin engine, settling for a well-contested second position in his last race.

Overall, Henderson says he was pleased with his performance and even more pleased to come out of the weekend “still in one piece”. To sum up the experience, he says, “it was such a high all weekend. The weather was perfect, the tires were sticky, the engine ran superb, and I was super thankful to finish that last race. I’m glad my bike and I made it through!”

The VRRA Grand Prix marks the end of the 2017 VRRA season. Which begs the question: will Henderson return to the track next year?

“That remains to be seen,” he laughs. “I’ll have my thoughts of the weekend to keep me warm through the winter but we’ll see when the time comes.”