‘The Food Truck’ drives onto the Vankleek Hill restaurant scene 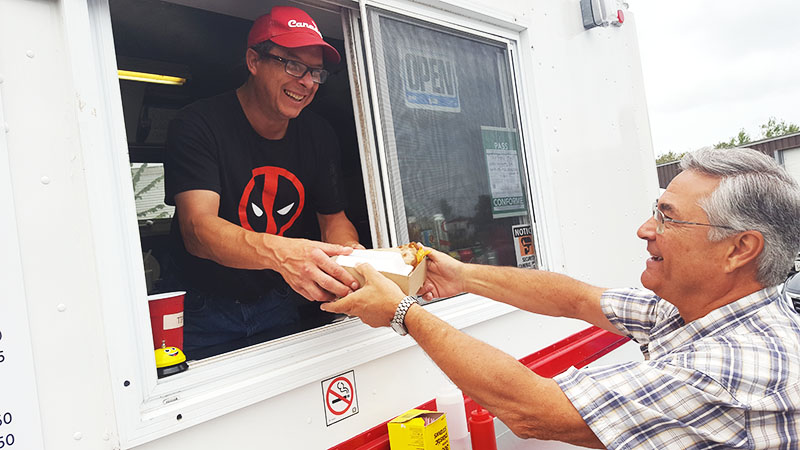 Stacy Sauvé hands a hungry customer his order from the window of “The Food Truck”. (Photo: Clark McGillis)

In the last few years, food trucks have been popping up all over the country, and while other places might have a food truck—or maybe even many food trucks—Vankleek Hill residents can now definitely claim to have “The Food Truck”.

After a year-and-a-half in the making, Stacy and Ann Sauve opened their new pop-up restaurant—simply named “The Food Truck”—on August 2. Located along Highway 34, in the lot at Milkovic M & M’s beside the Vankleek Hill Foodland, the new eatery has been busy despite opening late in the summer season, with little advertising. A month into the business, the husband and wife duo say say they’ve been pleasantly surprised by the early response.

“People keep coming—and coming back, too!” Stacy says. “I’ve had people—more than one—say we have the best fries in 200 km.”

True to its name, The Food Truck serves traditional “chip stand” fare—burgers, fries, and poutines—but also adds some healthier options to the mix, such as chicken wraps, salads, and meal platters, with plans to add more items in the future.

The Food Truck offers both pre-orders for pick-up, as well as delivery. Although, at the moment, in order to ensure food quality, the restaurant limits delivery to addresses within town only.

For the Sauves, the most important rule when it comes to their food is simple—it has to be fresh.

“We really believe that the freshness makes a difference,” Ann says.

That goes for each and every one of their main menu items. Their meat is brought in fresh each day from local meat distributor, L’Orignal Packing, while Ann makes a new batch of her homemade gravy before the truck opens every morning. During the same time, starting at 5 a.m., Stacy spends three hours peeling the potatoes that will eventually become the fries they serve to customers that day—and that day only. None of the food is reused from one to the next.

But the Sauves contend they also don’t let food go to waste. So what happens when they have leftovers? As it turns out, the Sauves have a neighbour who’s always happy to pick up the scraps.

“Mr.Milkovic’s dog loves our leftovers. [Mr.Milkovic] even makes sandwiches for him with our hot dogs,” Ann says.

Driven by a dream

For Stacy and Ann, the decision to open their own food truck has been a dream long in the making.

“We’ve thought about doing this for many years but we were never ready to go all-in.” Stacy says. “One day, we just decided to do it and now here we are and it’s going great.”

Five years ago, Stacy worked in a tungsten mine in the Yukon. Facing 12-hour trips in and out of camp each weekend, and forced to miss out on birthdays and special events with his children, he says he knew he needed a change. On her end, Ann is a registered nurse nearing retirement. She says that while her career has served her well, cooking has always been her passion and is something she’d be happy to do into her retirement years. Together, the two figured that starting their own food truck would be the perfect fulfillment of both their needs.

“It was always my dream to cook. I love doing it,” Ann says. “At first, it took a little convincing to get [Stacy] on board, but now he’s even more into it than I am.”

Before opening The Food Truck, the couple built up their chops doing smaller, less intensive events in the area, such as steak night at the Windsor Tavern, and the Vankleek Hill Farmer’s Market. Having honed their skills, the Sauves were ready to tackle the real thing.

But Stacy and Ann still had a long road ahead to opening their own food truck. The two spent their savings to purchase the truck and remodel it for their needs, which involved completely gutting and redoing the inside in brand-new stainless steel. Luckily, Stacy’s previous work experience served him well for the task, as he was able to do most of the work himself, saving much of the cost that the refurbishing would have entailed otherwise.

Fortunately, the two also received help from family members and friends along the way. One of Stacy’s friends, a former body shop owner, helped to set the truck up before they opened, while Mr. Milkovic provided them free rent while they went through the certification and approval process.

Even now that they’ve made their dream into a reality, the Sauves aren’t done dreaming up new plans for the future. Some of these plans include building a gazebo for shelter, as well as adding schools specials to the menu for Vankleek Hill Collegiate Institute (VCI) students and affordable meals for lower income customers.

“We want to be a place everyone can go to get a good meal,” Stacy says.

The couple plans to keep The Food Truck open into the winter, provided they can maintain the traffic to make it worthwhile. Asked if they were worried about running a food truck during the colder months, Stacy said, given his experience, he didn’t expect it would be an issue.

“I ran a water treatment plan at -60 degrees in the Yukon—I think I can run a food truck here!”