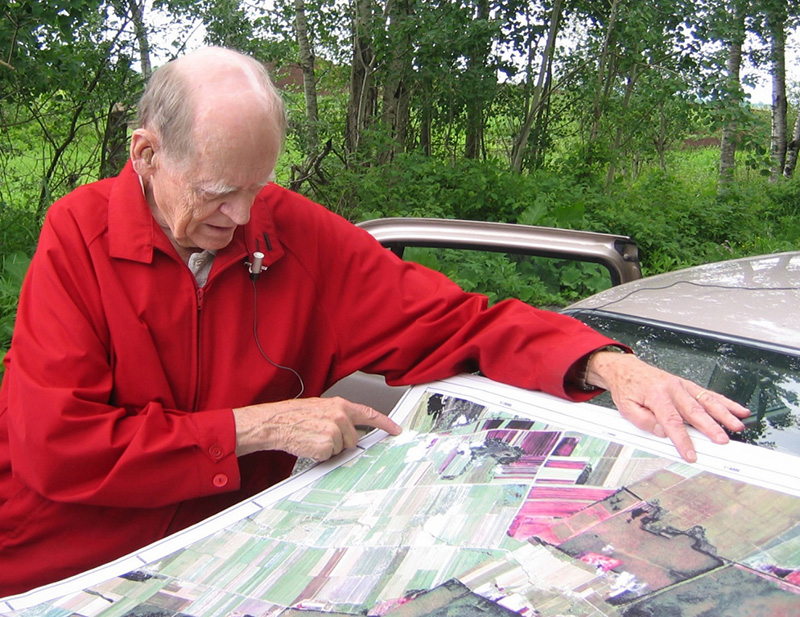 Léo Durocher is seen here looking at the plans of the Alfred Bog.

Founding of the Vankleek Hill
and District Nature Society
On March 3, 1977, residents Moira Beauchesne, Al Fraser, Rosemary Kozak, Bill Pilon, Bill Radix and Tom Sproule, decided to form an organization called the Vankleek Hill and District Nature Society. A constitution was drafted with the motto “Conservation through Education.” This guiding principal has assisted the Nature Society in meeting its objectives and in promoting the protection of nature.
Education of members, youth and the public has been accomplished by means of field trips and by inviting speakers to make presentations on many aspects of nature at regularly-scheduled meetings.
While the Nature Society has been able to accomplish the aims and objectives of the original mandate of 1977, it has also been able to create a social atmosphere in which lasting friendships are made between people who are concerned about protecting our environment. As Bill Radix says, reflecting over the past 40 years as a founding member of the Nature Society and President in 1980, 1981 and 1988 – “It’s still worth it”.

Saving the Alfred Bog
The Nature Society’s most rewarding project was a substantial contribution in preserving a large portion of the Alfred Bog. In the early 1980’s, 4,000 acres of The Alfred Bog, a 10,000-acre wetland ecosystem, where rare species live, were being threatened. The owner of this part of the Bog was petitioning for a rezoning of his portion from conservation to agriculture, a change that would remove any protection of the Bog. Despite the Nature Society’s objections, the Caledonia Township rezoned that 4000-acre parcel from “conservation” to “agriculture” in 1982.
Ernie Beauchesne and Leo Durocher started a movement to save the Bog and kept this group on tract for over 20 years. Leo continued with tenacity once Ernie moved away. The Nature Society joined forces with other Nature Societies in Eastern Ontario, the Provincial Government and the Nature Conservancy of Canada to buy and conserve 3,300 acres of the Alfred Bog. The Vankleek Hill and District Nature Society raised a total of $41,425.61. By 2007 the Conservancy completed the purchase.

Activities and Social Events
Over the years, Nature Society members met regularly, learned from various sources and received informative newsletters. Speakers talked about ancient marine fishes, bats, birds of several species, bees, wild edibles, forest ecology, aquifers, the Ottawa River. We organized trips to Voyageur Park, the Alfred Bog and Lagoons, Cooper Marsh and Petrie Island to identify plant and animal species.
Members installed bird nesting boxes in various areas and placed a bird feeder near the Vankleek Hill Recreational Trail Pavilion. The group participates yearly in the Audubon Christmas Bird Count. The Nature Society contributed to the Ontario Breeding Bird Atlas 2001-2005. The group took part in the 2011 International Plowing Match with a Nature information booth. As a current project, the Nature Society plans to install an osprey platform at Voyageur Park in early September.
The group distributed Bird-Watching kits to schools to encourage the students to observe and appreciate Nature. It also organized Art and Writing contests in local schools to promote the protection of the environment. The Nature Society sponsors high school students to attend the yearly Ontario Nature Youth Summit held in September.
Recently, the Nature Society learned of the future construction of a cement plant near L’Orignal and expressed its concerns regarding its effect on the environment. The Nature Society members believe, “Let’s preserve Nature locally, without feeling overwhelmed by deforestation, dwindling numbers of song birds, the loss of Monarch butterflies and other global threats.”
The Vankleek Hill and District Nature Society is are celebrating its 40th anniversary on September 18, at 7 pm, at the Vankleek Hill Collegiate Institute Library at 5845 Highway 34 in Vankleek Hill. All are welcome to attend.
This brief history of the Vankleek Hill and District Nature Society was prepared by its members for The Review. 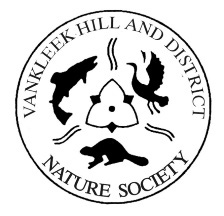