Recruiting challenges for companies in the area 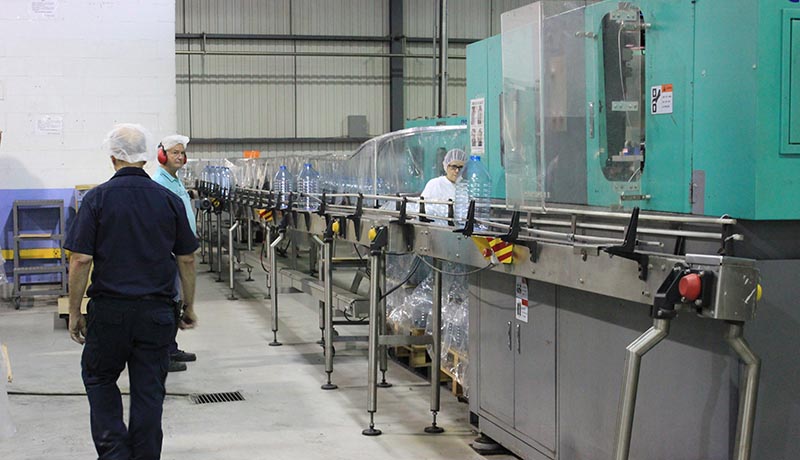 On the Quebec side of the river, Véo Springs, a water bottling company based in Grenville-sur-la-Rouge, can’t meet the growing demands for their product because it can’t seem to attract new employees to grow its workforce. On the other hand, on the Ontario side of the river, Dart Aerospace just closed it’s Oregon, U.S. plant and hired 20 new employees and will continue growing in the near future.

Quebec Provincial MP Yves St-Denis visited Véo Springs on August 10. The visit was hosted by Veo Spring’s director of production, Benoit Grégoire, and showed the MP the daily processes of extracting water from the source, making the bottles and bottling the water. Jean-Mark Rizk, president of Véo Springs and Grégoire have a problem most entrepreneurs dream of: a high demand for their product.

MP Yves St-Denis, before starting his tour, said that  “Quebec will have a workforce shortage of  750,000 workers in the next three to four years. The unemployment rate across Quebec is below 6%. When we have immigrants willing to move here, it’s a great opportunity for employers to hire both skilled and unskilled workers.”

Although they have the facility to grow their business, Veo Springs needs staff. Grégoire has been trying to recruit for the past three months. Véo Springs wishes to double its production with 15 new employees and create a second work shift.

“Our geographic situation is obviously not helping us recruit. We are looking to double our workforce in order to meet demands. These are manufacturing jobs that require very little education or skills since we have our own processes. Since the jobs require no education or skills, we can’t pay as much as other jobs that require skill or education. But the area is affordable to live in and it’s also in a rural, forested setting that could be attractive to some people,” said Grégoire.

Dart was ready for the move

Dart Aerospace will be closing its Oregon plant by the end of this year and will move that operation to their Hawkesbury facility. The Oregon plant was a machine shop used to design helicopter accessories and other helicopter parts.

Tassé says they don’t have a hard time recruiting, partly because there are aeronautical employment platforms where the company can post job opportunities.

“Dart is in a blue collar area, so for welding jobs and such, we can easily find candidates around here. Sometimes we recruit young people coming out of surrounding colleges like La Cité Collégiale in Ottawa. As for marketing and sales, we have an office in Montreal, where the kind of candidate ideal for the job is abundant,” Tassé said.

Dart is not only expanding its capabilities here in Hawkesbury but also across the globe. Although their main business lies on the commercial side, it has some military contracts and it has the government’s blessing to go after contracts with other countries.

“We changed the way we distribute our products. We now have sales representatives in Europe and Australia. I don’t think Dart from 19 years ago could survive in today’s market, but we diversified and with the dollar strength we are in a great position for growth,” said Tassé.