Video sparked a protest and outrage on social media 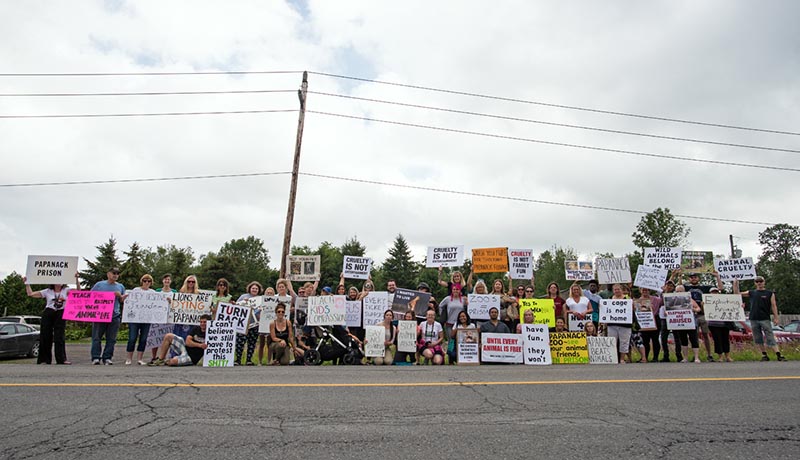 A video was posted online recently by Animal Justice that allegedly shows Papanack Zoo employees mistreating animals and taking babies from their mothers. A Papanack Zoo spokesperson  informed us that the video was heavily edited and does not represent the work being done at the Papanack Zoo. The zoo will be releasing an official statement this week. The video now has more than 400,000 views on Facebook.

Ottawa Animal Defense League, which was supposed to stage a protest the zoo at the end of August, caught wind of the video release date and decided to move up the date. The protest was held this past Saturday.

Animal Justice, a Canadian animal rights group under the leadership of Camille Labchuck, managed to infiltrate the zoo and capture footage of employees bragging about taking away babies from their mothers and then lying to visitors. We also see a sheep being handled roughly. According to Michele Thorn, a member of the Ottawa Animal Defense League, there is no direct affiliation between her organization and Animal Justice but it was a consolidated effort in order to get the momentum they needed to shine light on the zoo, she says.

“We are pleased with the media response, we had the opportunity to give multiple interviews on-site and that led to great media coverage of our other protest in front of the Community Safety and Correctional Services Minister’s office, Marie-France Lalonde. Obviously we are against all forms of animal captivity, but our fight right now is to one day see the province of Ontario better regulate zoos and the acquisition of exotic animals.” said Thorn.

According to Thorn, anybody can buy exotic animals in rural areas and keep them in captivity. There are even auctions in the area for exotic pets.

“Zoos always try to seem like they are conservationists, which is appalling. Some of these animals are from tropical regions and spend their winters in a small barn on the owner’s property. How is that conservation?” asked Thorn.

The Minister of Community Safety said to the media that she was very troubled by what she has seen in the video. She also said that the Ontario Society for the Prevention of Cruelty to Animals (OSPCA) has the funds and resources to investigate animal abuse across the province.

On the Papanack Zoo website, it says : “We are very proud to announce that Papanack Park Zoo Inc has recently been purchased by new owners in 2014. Our goal is to provide animals with a comfortable, caring and safe living environment, while allowing the public an exciting, educational and fun place to visit!”

Kerri Bayford and her husband became the new owners of Papanack Zoo in 2014. Before that, the zoo was already suffering from bad reviews. In February 2016, a lion named Zeus escaped the compound due to human error. He was later shot and killed by Bayford’s husband because, according to the OPP, the officers did not have the adequate firepower to take down the powerful animal.

According to Thorn, zoos are in no way, shape or form, a natural habitat for animals. She also said that the bears at the zoo are domesticated animals belonging to a trainer who works in the entertainment industry.

In the video, animals are being taunted and stressed into positions for photo shoots, which is apparently a revenue stream for the zoo. According to the video, the animals were used for the reality TV Show, Billy Goes North, although it is not clear if the animals were from Papanack Zoo.

We will be following up on this story in the weeks to come. You can see the video on YouTube or on Animal Justice Facebook page.