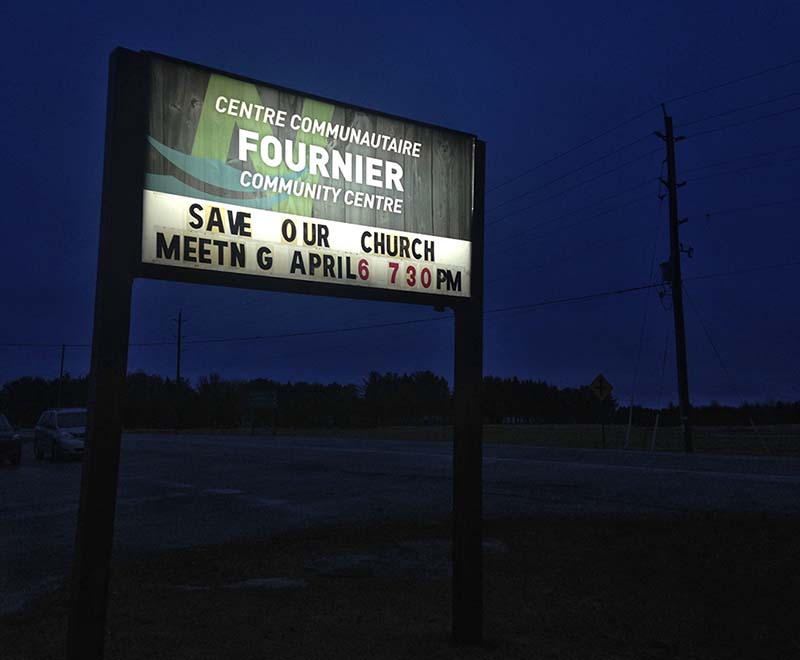 At a meeting Thursday, community members in Fournier asked church officials for a chance to prevent the closure of St-Bernard’s parish.

Roxanne Ryan and Michel-Andre Lavergne spoke for a committee of residents at the meeting. St-Bernard Church is celebrating 150 years in 2017 and Ryan is also one of the organizer of the anniversary celebrations. The meeting was held at the Fournier Community Centre, and most seats in the hall were full.

Lavergne said he was notified just a few weeks ago about the planned closure of St-Bernard Church. “I came to realize a very important principle was involved here,” he said. “If I feel some people’s right have been infringed on, it stirs me up.”

The plan, said Lavergne, is St-Bernard Church would be closed and a new church would be built in St-Isidore. The village’s Catholic church was destroyed by fire last summer.

The meeting was called in part because “disquieting” rumours had been circulating about the closure of the parish, says Lavergne. This way, everyone would be in the same room – including Terrence Prendergast, Archbishop of Ottawa.

“The key question to be debated last night was, how is it that the destruction of St-Bernard church in Fournier has suddenly become a necessary condition in the construction of a new church in St-Isidore?” said Laverge. The committee members shared a couple of main questions with Prendergast in advance:  what process is in place for the closure of the church, and what could be done to keep it open?

Prendergast said St-Bernard’s parish attracts a relatively small crowd on Sundays – between 35 and 50 people, he said. There’s also a decline of religious practice in general, he said, mentioning one priest who was responsible for six churches in the Hawkesbury area, and another who was responsible for seven parishes in Vanier. “What does it mean to be a priest at a parish where there’s almost no one? We have big buildings we must support and maintain,” he said.

The biggest challenge, he said, isn’t so much keeping a building open as it is keeping a religious community alive. “The church isn’t a building, it’s a community of faith. That’s what’s important,” he said.

Lavergne pushed for an answer on the first question: is there a process in place to decide what churches will close?

“We want to participate in a process that includes us, which isn’t the feeling we’ve had” up until now, said Lavergne. He brought up a recent consultation process at six Soleil Levant parishes. The process included six Catholic parishes and local Catholic school boards, and recently resulted in several new initiatives aimed at increasing participation in church activities.

Prendergast said he isn’t sure a similar project would work in Fournier or St-Isidore. “It seems to me there are rivalries between St-Isidore and St-Bernard, that it would be difficult to arrive at a common solution,” he said.

Lavergne said he and the committee members disagreed. “One of the rumours spreading around is that there is this rivalry between these two parishes, and that cooperation is impossible. So we simply stated, that’s wrong. Our perception is that’s not true,” he told The Review on Friday.

The archbishop said he was not opposed to a committee being formed with members of both parishes, and to hearing suggestions on how to go forward, but said the community should not rule out the closure of St-Bernard’s parish. 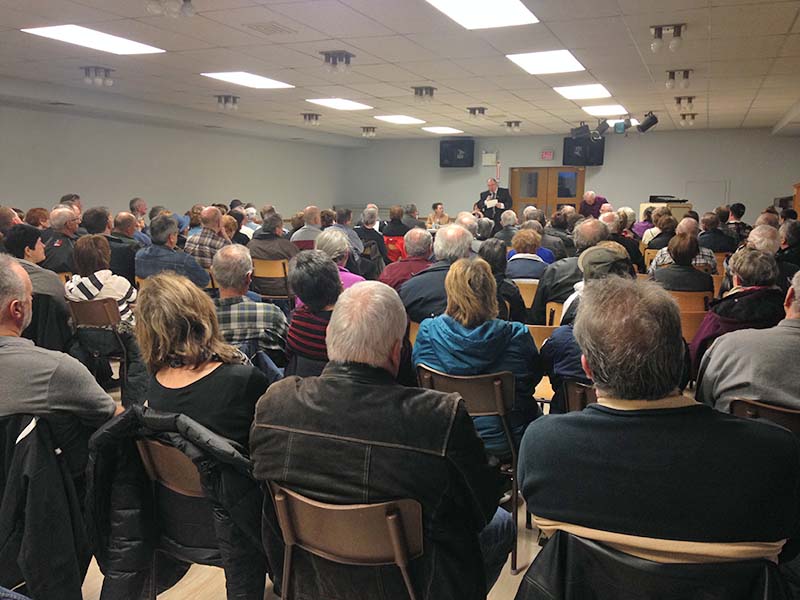 The municipal council of The Nation has published a notice of its intention to designate St-Bernard Church as a “property of cultural heritage value or interest” under the Ontario Heritage Act, which became a sticking point at the meeting.

The archbishop said he was “hurt” by the request’s being made without permission from church officials. He referred to the heritage designation as a “trap” and asked the committee to ask the municipal council not to designate the church. “We have to avoid this at all costs,” he said.

Ryan said having the church designated as a heritage property isn’t a new idea – it has been talked about for years, she said. “We wouldn’t want you to think that we did this to be mean, that we did it out of vengeance, or that it’s a reaction,” she said.

The archbishop reiterated that no one asked the diocese for permission for the heritage designation, and they should ask council to cancel the designation. “If you want to continue with the process, it’s important to start there,” he said, which drew boos from the crowd gathered at the community centre.

Lavergne and Ryan were non-committal, saying they couldn’t make decisions on behalf of the entire group. Speaking with The Review on Friday, Lavergne said he was disappointed that an open process for the closure of the church and the heritage designation were tied together.

Lavergne said the church is important to people, even if they don’t attend mass every Sunday. “I think we’ve moved away from the concept of strict religious meaning to it,” said Lavergne. “A church stands for life in a village.”