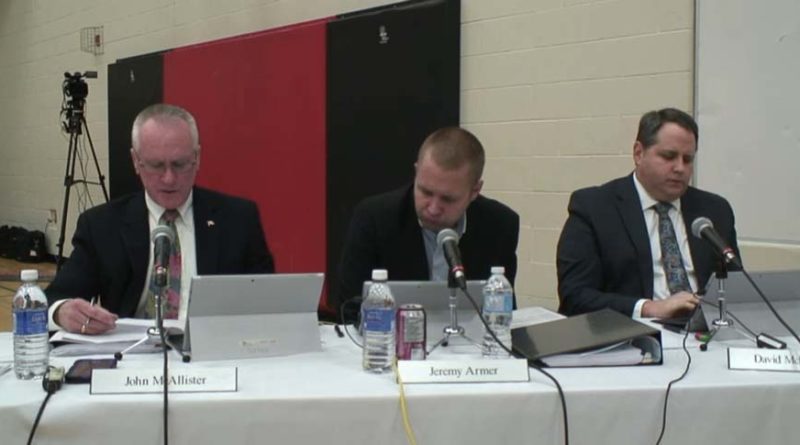 The closures adhere to the school board staff’s latest report, a scaled down version of its original draft Pupil Accommodation Review report, which suggested the eventual closure of 29 schools. This latest plan would eliminate 2,358 surplus pupil spaces out of about 10,000, according to school board staff.

Eight schools are considered “category one” closures. These are scheduled to be closed either in September 2017 or 2018.

While many seats in the audience remained empty during Thursday’s meeting, it was not without debate, and the votes were not unanimous.

Trustee Lisa Swan, whose territory includes Prescott and North Grenville, proposed removing Oxford-on-Rideau Public School from the list of category one closures. The school is set to close in September 2018, if space is made available for more students at South Branch Elementary School. “The board has not been able to demonstrate by any means that there will ever be space available” at South Branch, she said, adding that the school is in a fast-growing area. “There’s nowhere for these students to go in the next four years except portables,” she said.

Swan had the support of Trustee John McAllister, who suggested a  “re-vitalization” process at the school, which would include offering French Immersion and new programs, and looking into the possibility of providing early childcare.

Trustee David McDonald, who represents Cornwall, said current enrollment at Oxford-on-Rideau is 85 students, a 57 per cent reduction since 2007. “I’m not sure we’ll ever replace those students,” he said. Ultimately, Swan’s motion failed, with six trustees voting against it and five voting in favour, and Oxford-on-Rideau remained on the list of closures.

Similarly, Trustee Wendy MacPherson, who represents North and South Glengarry and North and South Stormont, suggested removing Rothwell-Osnabruck Schools (Grades 7-12) from the list of closures. “If I’ve annoyed anybody with my persistence on this amendment I apologize,” she said. She argued “we have a chance to rise about the easy way” by keeping the school open.

Trustees McAllister, Jeremy Armer (North Dundas and South Dundas) and Caroll Carkner (Prescott and Russell) voiced support for the amendment. “If we concede that only a school with a certain number of students can provide a valid secondary school education, then it seems to me we are going to be closing a lot of schools (in province as a whole) and I don’t think that is right,” said McAllister.

Trustee McDonald, however, said he supported the closure of the school. He noted that enrollment in the secondary grades at the school has decreased by 54 per cent since 2007, and is expected to be less than 90 students in 2017. The school has more teachers than the board’s standard of one per 22 students, he said. McDonald added he is not convinced the “French Immersion magic potion” will increase enrollment significantly. He argued that parents who support the Pupil Accommodation Review process and the closure of certain schools “wouldn’t dare step in front of a mic and say they support what we’re doing, out of fear of reprisal.”

MacPherson’s amendment was defeated 5-6, and Rothwell-Osnabruck Schools (Grades 7-12) remained on the list of category one closures.

Trustee Lisa Swan proposed another amendment, this time to exclude Benson Public School from the list of closures.  That amendment was also defeated, in a 4-7 vote.

The board then moved on to “category three” closures. These four schools are set to close contingent on approval from the province for new schools or additions elsewhere.

Trustee McAllister suggested removing Maynard Public School from the list. Staff recommended closing that school if the ministry approves the construction of an addition onto Wellington Elementary School.

Swan supported the amendment. “This one really bothers me,” she said. “I don’t think we can keep decimating rural communities.” Necessary renovations at the school would cost more than replacing it, but Swan suggested it should be rebuilt at or near its current location.

The school is within the territory of Board Chair Jeff McMillan. “I love Maynard school,” he said, “but I can’t fight to keep something that reality says can’t stay.” He said the province will not agree to rebuild a school that has low enrollment, and the building is nearing the end of its lifespan.

McAllister’s amendment was defeated in a 3-7 vote.

Finally, Trustee Wendy MacPherson suggested an amendment to keep North Stormont Public School off the list of closures, but that motion was defeated 3-7.