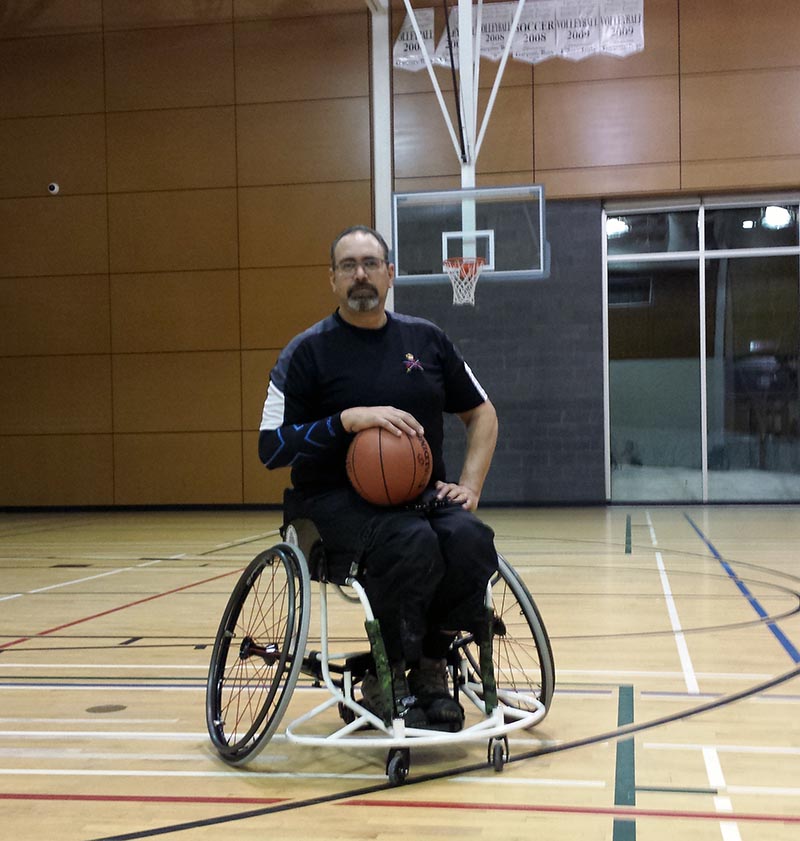 David Desjardins, a wheelchair basketball player, is seen here in a submitted photo.

David Desjardins says sports helped him recover from mental and physical injuries he sustained during his military service. Now, he hopes other veterans will have the same opportunity.

Desjardins, who lives in Wendover, served in the military for 15 years – five years with the artillery, and later with the military police. “When I was released from the forces, I was diagnosed with PTSD and I also suffered a physical injury, which put me in a wheelchair,” he said. He started playing wheelchair basketball about four and half years ago because of Soldier On, a Canadian Armed Forces program aimed at promoting physical activity for veterans.

Getting started wasn’t easy, says Desjardins, who had played basketball growing up and a little bit when he was a soldier, but had never been a serious player. When he first started playing wheelchair basketball with the Ottawa-Carleton Wheelchair Basketball Association, he was still adapting to his injury. “I was a little hesitant,” he said. “It involved me going outside the house and interacting with people, which I wanted really no part of” at first, he says. But soon, he was hooked. “It got me out of the house, socializing with people, it got me physically active again. It’s been great for both my mental health and my physical well-being.”

Now, Desjardins is part of Team Canada for the Invictus Games, which Toronto is hosting in 2017. The games were founded by Prince Harry in 2014, and involve athletes, either members of the military or veterans, from 17 different countries. The organizers say the objective of the games is to “use the power of sport to inspire recovery, support rehabilitation and generate a wider understanding of and respect for” veterans and veterans’ families.

It’s not easy to be chosen for Team Canada: Desjardins said about 500 applications were narrowed down to about 90 Team Canada athletes, including 16 basketball players. The application process involves submitting a biography and a military history, and applicants have to be involved with Soldier On. “Team Canada’s focus isn’t so much on winning – it’s participation, and getting people into a sport that they will continue after the games,” he says. The purpose of the games is to promote sports as a tool to help veterans recover from injuries – and not just the ones you can see. “You’ll see some athletes with prosthetics, some in wheelchairs, and some have no visible injuries at all, but suffer from operational stress injuries or PTSD,” he said.

In fact, most of the players have never played wheelchair basketball before, ever. Desjardins was named the team mentor because of his experience. He said it’s been fun to be in contact with the other players, some of whom just recently got their basketball chairs. “They’re realizing how physical the game is, and being introduced to muscles they didn’t know they had,” he says with a laugh. He said athletes new to wheelchair basketball will notice a huge difference from traditional basketball, in that while the latter is a leg sport, wheelchair basketball is entirely about upper-body strength.

Desjardins says he understands why veterans might not be interested in starting a new sport, especially after an injury. “It took a lot of poking and prodding to get me out, and nobody has perfect days. There are still days when I don’t want to go out, but the bottom line is, you have to force yourself. You have to step outside your comfort zone…because that’s the only way you’re going to get used to it, and overcome the barriers.”

You can find out more about the Invictus Games, which will be held in Toronto between September 23 and 30, 2017, online here.