Kudos to our Local Government 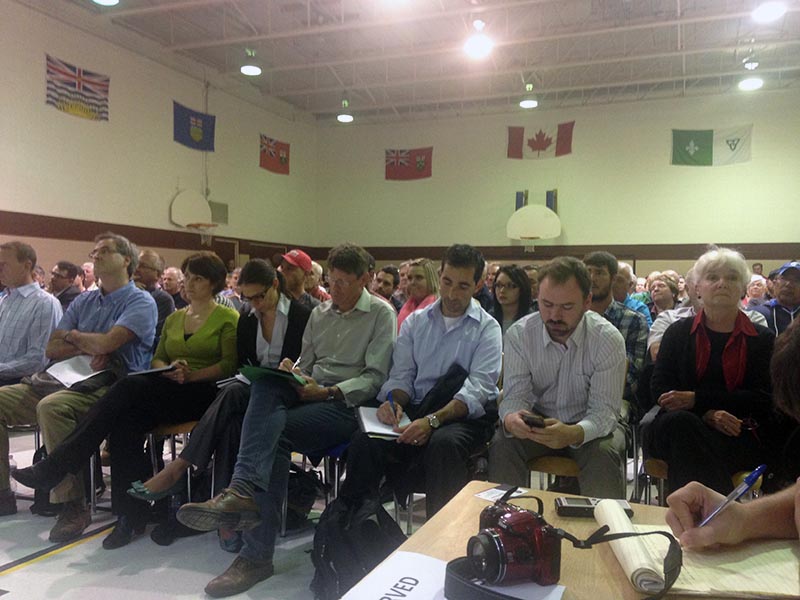 Citizens packed the gymnasium at École St-Jean Baptiste at a public information meeting last week which was held to allow people to comment and ask questions about a proposed cement plant for the L’Orignal area. More than 100 people were turned away at the door when the hall reached its capacity.

On behalf of the people of Champlain and area, I want to publicly thank our councillors for taking a stand against the zoning change that would allow for the building of a cement plant in L’Orignal. When embroiled in a controversy the likes of Colacem,  it takes courage to resist the pressure of lobbyists and do the right thing. It is comforting to know that you did not take lightly the legitimate concerns of the citizens and understood that we are not a bunch of trouble-makers, resisting change. We have repeatedly and clearly expressed our reasons for opposing this polluting industry and you heard and paid attention, for which we are extremely grateful. I do not envy your job in such situations, hence I salute your good judgement and respect for democracy.
Kudos to the three mayors, Mr. Barton, Mr. Kirby and Mrs. Charlebois who, at the UCPR meeting, voted against the amendment to the official plan in support of its citizens.
On the other hand, I am totally baffled by the other mayors who voted in favour of the cement plant in our locality. Was it the fact that the pollution will not reach your towns that motivated you to vote in favour of an amendment to the official plan?
Did you take time to hear both sides of the issue? Did you study the proposed cement plant and the effect it would have on our surroundings? Did you know that the high emissions of sulphur dioxide combined with water in the atmosphere produces sulphuric acid which comes down as acid rain? Of course it might not matter to you as it is not in your back yards. Or did you see dollar signs before your eyes enticing you to vote as you did? Need I remind you that Colacem is a multinational company that is bullying its way into our country landscape to make money? We must not be conned into believing that the investors are looking out for our interests. Just  look at the new leadership  south of the border to understand that the very rich take more from society than they give back. Colacem is no exception. We should look more closely at the agenda of the Quebec investors behind this project. Why  their interest in setting up shop in Ontario  when we realize that a good part of the raw materials would be trucked in from Quebec and the finished product trucked back to Quebec to the port of Montreal for export? Should  we not question  the logic of choosing this site? Does it not raise red flags? Why then bend to such a demand? Why should Champlain become the dumping ground for Prescott-Russell by allowing a polluting industry in a farming and residential zone? Is our farming environment less valuable than that of Casselman, The Nation, Russell or Clarence-Rockland? Your  votes show a lack of judgement and vision. Either you did not do your homework or the east end of Prescott-Russell does not matter to you.
At times like this it is easy for us to feel like a field mouse cornered by a very large snake; yet our citizens must remain united and continue to work together to protect this beautiful corner of Ontario from polluting giants with big promises and little substance. (What can we expect here since the brand new McInnes cement plant in Port Daniel with all its filters will spew over one million tons of greenhouse gases into the atmosphere annually when in full production?) The proposed cement plant filters, which removes some soot, will not prevent the toxic gases from spreading far and wide across our land. That is false advertising. I urge the  citizens of Champlain and Hawkesbury to keep informed and involved in the democratic process as this saga continues to unfold. The bottom line is that a heavy industry does not belong in an agricultural zone. Period.