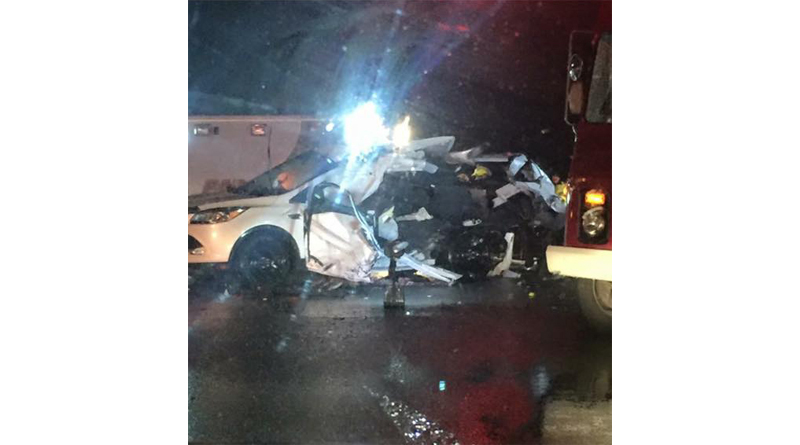 On November 30 there was a two-vehicle collision at the intersection of Highway 34 and Tannery Road, in Vankleek Hill. (Photo courtesy of Nicholas Baron)

Two people were injured in a two-vehicle crash that took place at around 7:30 p.m. on November 30 at the intersection of Highway 34 and Highway 417 in Vankleek Hill.

Ontario Provincial Police Constable Joel Doiron told The Review that a car, later identified by firefighters as a Ford Escape, exited the off-ramp to Highway 417 at Tannery Road. It then allegedly broadsided a five-ton truck that was travelling on Highway 34 in the direction of Alexandria.

Vankleek Hill Fire Chief Michel Martin told The Review that the driver of the truck was treated on the scene by paramedics and was released. The occupants of the Ford Escape had to be cut from their car by firefighters using the Jaws of Life.

Martin said the driver of the car suffered an injury to his arm and a female passenger had an injured hand. Both were complaining of back pain when they were removed from the car and sent by ambulance to Hawkesbury and District General Hospital.

Doiron referred to the injuries as serious, but not life-threatening.“It was a good thing for the air bags. That car was full of them. It was a little Ford Escape and I’m sure the airbags saved their lives,” said Martin.

The fire chief referred to the scene of the accident, which occurred in front of Herb’s Travel Plaza, as being the location of numerous accidents. “It always happens at the same place,” said Martin.

Police are continuing to investigate the accident, but so far no charges have been laid. “We have had quite a few collisions there, and usually, when there is a collision there, they are pretty bad ones,” said Doiron.