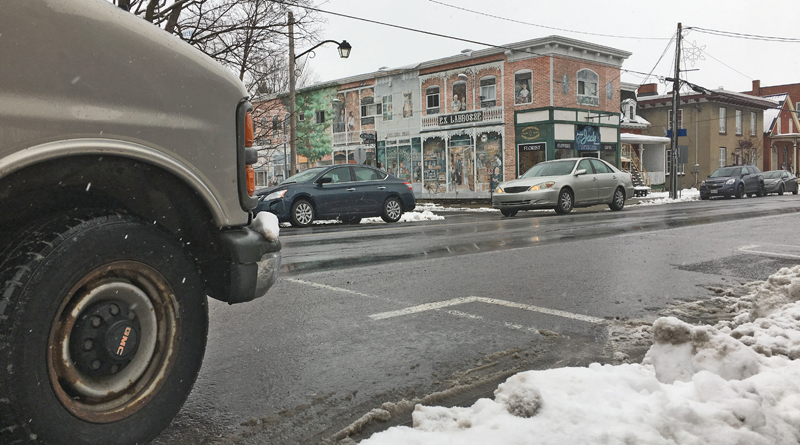 Police urge motorists to use caution and common sense when navigating roads this winter. Main Street, Vankleek Hill is pictured here on a snowy day in November. (Photo: Tara Kirkpatrick)

Ontario Provincial Police (OPP) Constable Joel Doiron, of the Stormont, Dundas and Glengarry (SD&G) detachment, is urging motorists to slow down. When the snow is falling and the road conditions are deteriorating, he said drivers need to use their common sense and their brakes.

During the first snowstorm of the season, Doiron reports that there were more than 120 collisions in SD&G, including one which resulted in a fatality.

“They were all preventable. Slow down, or stay home. It’s all about common sense and driver responsibility,” said Doiron.

Deer and wildlife are another problem facing drivers this time of year. Doiron said that his detachment averages one or two crashes per shift that involve deer.

“This is the time of year where car versus deer collisions are on the rise. It’s because of the movement of the deer, which are crossing roads and changing habitats,” said Doiron.

He said that built up areas tend to be more problematic than rural ones, but warns that deer can cross the road anywhere.

“Be careful and check in the ditches as you are driving along. Try to spot their eyes flashing in your headlights before you hit them,” said Doiron.

He advises motorists to be extra vigilant at dawn and dusk, when visibility is reduced and wildlife are more active. Deer seldom run alone and if you see one, chances are there will be more.

If you need to avoid deer on roadways, Doiron says you should not swerve. He says the safer option is to brake firmly and stay in your lane so that you don’t lose control of your vehicle.

If you are in a collision with a deer, report the incident to the police.