Maxville residents hope to save local school from closure 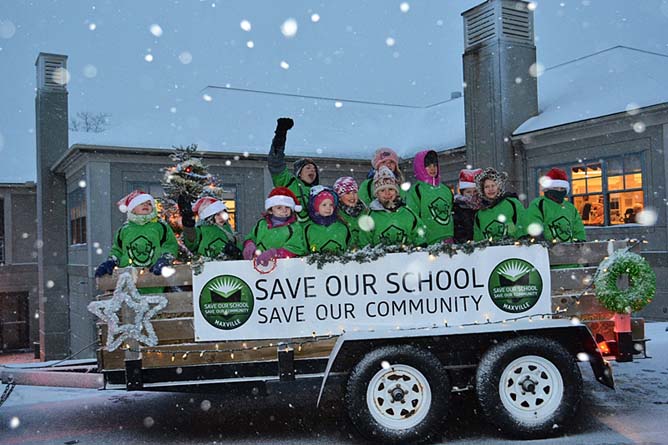 A group devoted to fighting the potential closure of Maxville Public School by the Upper Canada District School Board, participated in the Maxville Santa Claus parade on November 20, 2016. (Janice Winsor)

The proposed closure of Maxville Public School will be on the agenda at a town hall meeting in the village on November 30.

The Parent Council of Maxville Public School and the Township of North Glengarry are behind the effort to save the school, which is one of those slated for possible closure by the Upper Canada District School Board.

A press release issued by the organizers of the meeting say Maxville Public School students perform well on standardized testing and that the school has lower than average operating costs. In the release, Emily Andrews, chair of the parents’ council, suggests that instead of closing the school, more services should be added, like french immersion  and before and after school daycare. Municipal councillor Carma Williams is also involved in the effort – she is quoted as saying that “Maxville property values would fall 20 per cent overnight” if the school closed.

Representatives of Maxville’s “Save our Rural School” group recently entered a float in the recent Maxville Santa Claus parade. One participant, Victoria MacKinnon, told The Review that as a parent of two children who attend Maxville PS, she supports keeping the school open. “The school is the heart of the community, and without a school, there is no community,” she said.

Representatives of the Upper Canada District School board have said that no final decisions have been made regarding school closures. The board has been soliciting feedback regarding the draft version of its Pupil Accommodation Review, and will host public meetings in January, 2017. The review process was initiated because, according to the board, there are almost 10,000 extra spaces for students in board schools, and those spaces are no longer being funded by the province. The board’s draft report said enrollment at Maxville PS was 117 students, while it has a capacity of 300, and recommends closing the school. Students would be sent to either Laggan School or Roxmore School instead, although the report acknowledges parents may decide to send their children to nearby schools run by other boards, including in Maxville itself.

The meeting will be held at the Maxville and District Sports Complex at 7 p.m. on November 30.