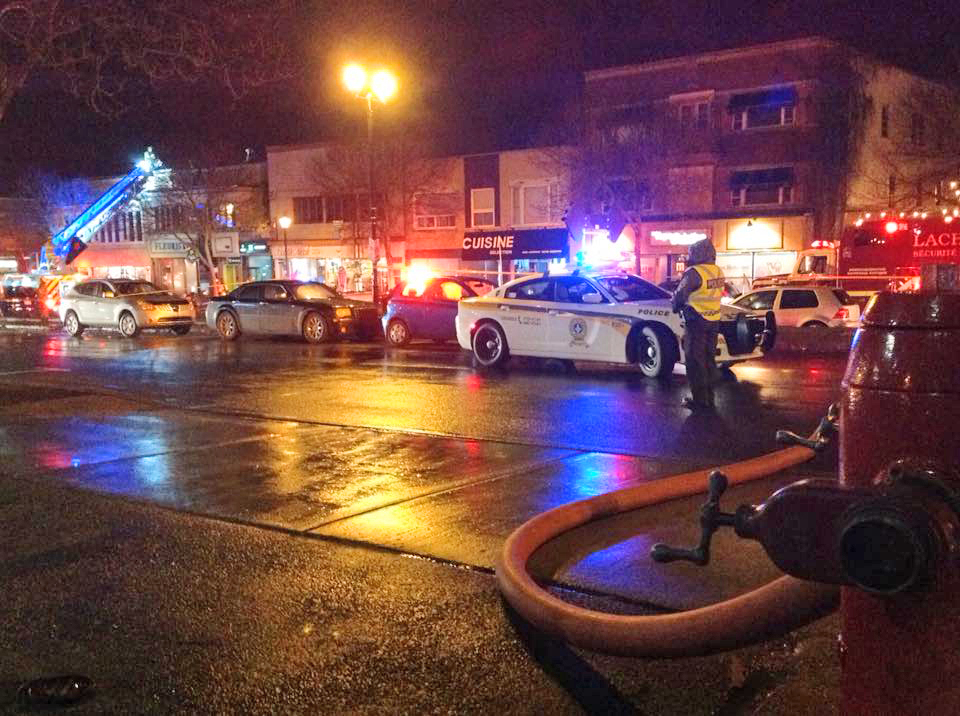 On Saturday, November 19, firefighters battled a blaze at 533 rue Principale, in Lachute. The fire has been listed as arson and a suspect has been arrested. (Photo: Tara Kirkpatrick)

A 50-year-old Lachute man has been arrested in connection with a number of fires took place in Lachute and surrounding areas over the past few months, including two fires in downtown Lachute on Saturday, November 19.

Shortly before 10 p.m. on Saturday, the Lachute Fire Department received a call about a tree that was on fire near the corner of Clyde  Meikle Streets. About 10 minutes later, firefighters were working on putting out that fire when another was reported about a block away, at 533 rue Principale.

Clouds of smoke were billowing up main street Lachute in all directions, limiting visibility as people began to leave nearby restaurants and apartments. Firefighters cordoned off the street in both directions and power was cut to the affected area. The smoke was so thick inside the Bernard Tessier florist that you couldn’t see through the large glass windows.

The back of the century-old building, which was an extension to the originally building, was engulfed in flames. Lachute Fire Chief Claude Giguère said that the age of the building and the fact that it was built in three sections made putting the fire out more difficult and allowed the flames to spread very fast.

More than 50 firefighters from Lachute, Brownsburg-Chatham, Grenville-sur-la-Rouge, Saint-André d’Argenteuil and Saint-Colomban responded to the general alarm fire. Giguère credits the fast response and large number of personnel for gaining control of the fire and keeping it from spreading to the surrounding businesses.The owners of these businesses arrived quickly on the scene, some still dressed in their pyjamas. Residents living in the apartment units near where the fire took place were similarly unprepared for the speedy evacuation.

Giguère said that it was lucky that the apartment above where the fire took place was empty when the fire started. No one was injured as a result of the blaze, which was extinguished just before 3 a.m. on Sunday.

Giguère estimates damages to the building will exceed $70,000, with an additional $60,000 or more in losses attributed to the contents in the building.

The suspected arsonist was arrested close to where the second fire was started. Firefighters were on scene when the arrest took place.