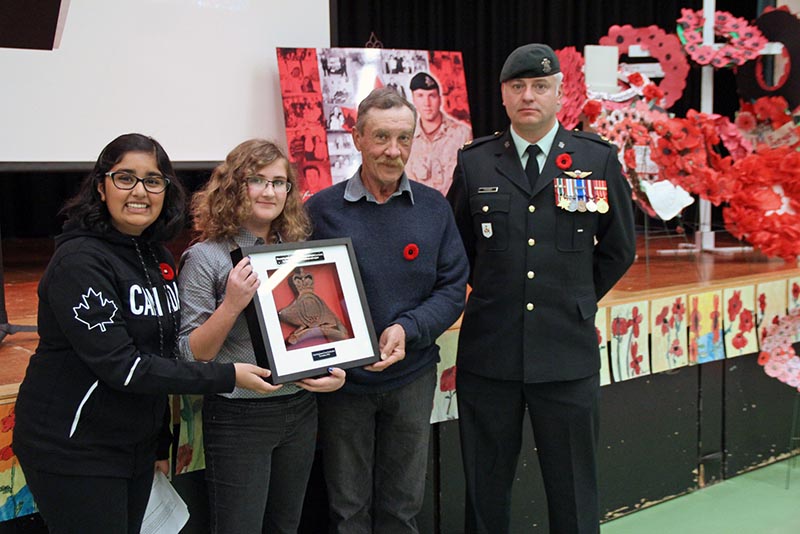 Jacques Lormand is seen here (second from the right), with Major Drummond Fraser, at a Remembrance Day Service that was held at Pleasant Corners Public School (PCPS) on November 11. As part of the service, Lormand presented PCPS with the regimental plaque of the Royal 22nd Regiment, which his son, the late Corporal Patrick Lormand, belonged to. The plaque will be hung alongside a tribute to Corporal Lormand, which hangs in the entry to the school. (Photo: Tara Kirkpatrick)

On November 11, Pleasant Corners Public School (PCPS) hosted a very special Remembrance Day service, which honoured the sacrifice of more than 100,000 Canadians who have died in wars and conflicts around the world. Special tribute was given to one of those soldiers, Corporal Patrick Lormand. 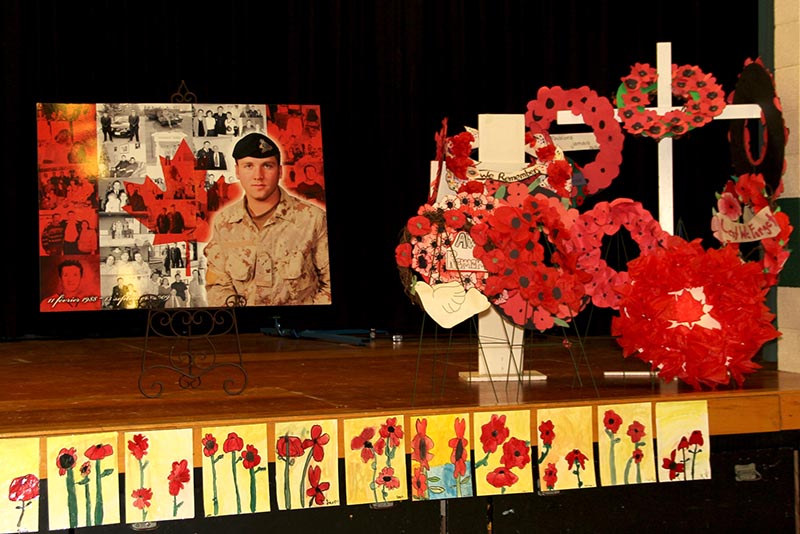 The Chute-à-Blondeau native was one of 158 Canadian soldiers to die in Afghanistan. His photo hangs prominently in the entrance to the elementary school and there is a bench in the playground that is etched with his image. On Friday, the children at PCPS had the chance to learn about the man whose face stares down at them from photos.

Special guest speaker, Canadian Armed Forces Major Drummond Fraser, who is himself a graduate of PCPS, and who now has two children in attendance there, spoke to the audience about war and sacrifice. He provided a voice for Lormand. Fraser spoke about the work Lormand was doing for the military and the difference he made.

Corporal Lormand attended St. Jude Catholic Elementary School and he used to play soccer in the fields behind PCPS. In 2004, Lormand joined the 33rd Bridage, in Ottawa. He served with them for two years, before transferring to the Royal 22nd Regiment, 3rd Battalion, based in Valcartier, Quebec. The “Van Doos,” as the Royal 22nd Regiment is known, trained Lormand as a light-army vehicle (LAV) driver. In 2009, he deployed to Afghanistan as part of Rotation Seven Battle Group. It was Lormand’s first overseas deployment. He was part of the eighth consecutive battle group to be deployed to Kandahar since 2006. The deployment was due to end in November 2009, after seven months.

“On September 13, 2009, Corporal Lormand was killed at age 21, when a roadside bomb detonated near his light armoured vehicle, on a dusty road in Panjwar District, approximately ten kilometres from Kandahar City. Four of his fellow soldiers were injured in the same blast,” said Fraser, who referred to 2009 as the “deadliest year in Afghanistan.”

“It was a very deadly year for Afghans, for Afghan Security Forces and for Coalition Forces, including Canadians. Corporal Lormand was one of 15 Canadians who died in 2009. There are specific reasons why 2009 was extraordinarily dangerous. Corporal Lormand’s Battle Group was deployed to carry out a new strategy in Southern Afghanistan,” said Fraser. He explained how Lormand’s battle group pushed out of the city, moving into small villages that he described as being similar to the ones we live in here in Prescott-Russell. Largely agricultural and with small industries and businesses, these villages were being controlled by the Taliban. It was the job of Lormand and his unit to push out the Taliban so that citizens could carry out their lives in relative safety. With the Taliban removed, citizens could come back to their farms and businesses and rule of law could return.

“There are certain things that the Taliban was particularly aggressive in trying to prevent. One was the opening of schools and allowing girls, in particular, to go to school. Prior to 2006, before Canadian Forces deployed to Southern Afghanistan, one of the top targets in Southern Afghanistan were teachers. Every effort was used to try to prevent a public education from being available. The other thing that was different about 2009 was that it was the year of the first open, free presidential elections in Afghan history. Every effort was made by the Taliban to prevent the population from being able to exercise the right to vote. It was in that context that Corporal Lormand found himself patrolling on a regular basis, in and around a small village called Panjwar,” said Fraser.

Fraser referred to Lormand as being one member in a chain effort that contributed to the opening of more than 6,000 schools, which provided an education to more than three million Afghan children. Coalition Forces helped to eradicate polio, to return rule-of-law and to assist with numerous building efforts.

“The military is a very small community that accepts a very high level of risk on behalf of the rest of us. There are fewer than 60,000 members of the Canadian Armed Forces. Within that, there are approximately 20,000 members in the regular army force and about 24,000 in the army reserve. A smaller community within that is the infantry corps. That is the corps that Corporal Lormand chose to join. It’s a small club that faces an extraordinary level of risk, in mission after mission. Corporal Lormand felt a calling to join that club and to take on a great deal of the danger and risk involved in the missions that the military is tasked to undertake,” said Fraser.

On Friday, Lormand’s father, Jacques, presented PCPS with the regimental plaque of the Royal 22nd Regiment. It was hung on a wall beside a picture of Corporal Lormand and is intended to serve as a living reminder of the sacrifices made by a young man from Chute-à-Blondeau who died in service to his country.