The Glens lineup for a 76th year 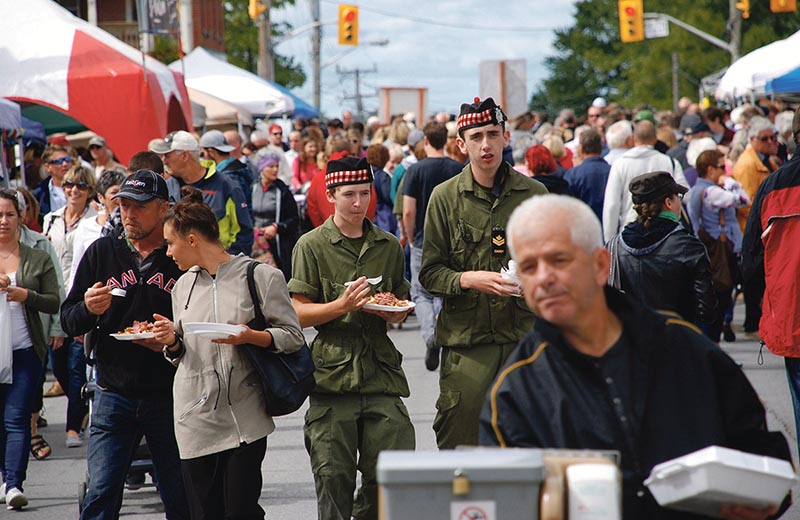 The 57 SD&G Highlander Cadets are back for another action-packed year of fun and community commitment.

A string of activities have already gotten underway for the 65 young men and women who make up The Glens, and fill the ranks every Wednesday evening at Vankleek Hill Collegiate Institute (VCI).

year began with September events that included a new-registration night at the high school, as well as about 20 cadets volunteering their efforts towards The Festival of Flavours the following Sunday.

“It felt good to help out at the festival because I was giving back to the community by doing something for someone else,” said MCpl. Owen Farrell. “It was a long day for us because we were there from start to finish, but we worked as a team and I think we made a difference.”

Sgts. Declan Farrell, Reid Quan, Dawson Valentine-Devine, Emilie Paquette, Joshua Gagnon-Quan and Kade Fowler joined fellow Gold Stars from other surrounding army cadet corps. this weekend for an expedition that included such activities as canoeing, camping and caving at Gatineau Parc. WO James Miller, from The Glens, was among the cadet officers who staffed the event as was MWO Matthew Villeneuve.

“This activity was mandatory in order for us to pass our Gold Star level, and it gave us National Star of Excellence points,” said Farrell, a bagpiper with the 57’s band. “I really want to collect as many NSE points as possible so when I’m older I can sign up for the Paratrooping course.”

CTWO Dayna Sandell is looking forward to the corp’s next activity.

“We have a weekend-long field training exercise coming up this month at Voyageur Provincial Park,” said Sandell. “I’m really excited because being the Company Training Warrant Officer, I have a lot of responsibility involved with this activity and I’m looking forward to taking on that leadership role and spending time with the new cadets.”

The 57 Highlander Cadet Corps. is a free activity for young people between the ages of 12 and 18. Those interested in joining the corps, or receiving more information about registration, are invited to show up at Vankleek Hill Collegiate Institute on Hwy. 34 Wednesdays at 6:30 p.m.