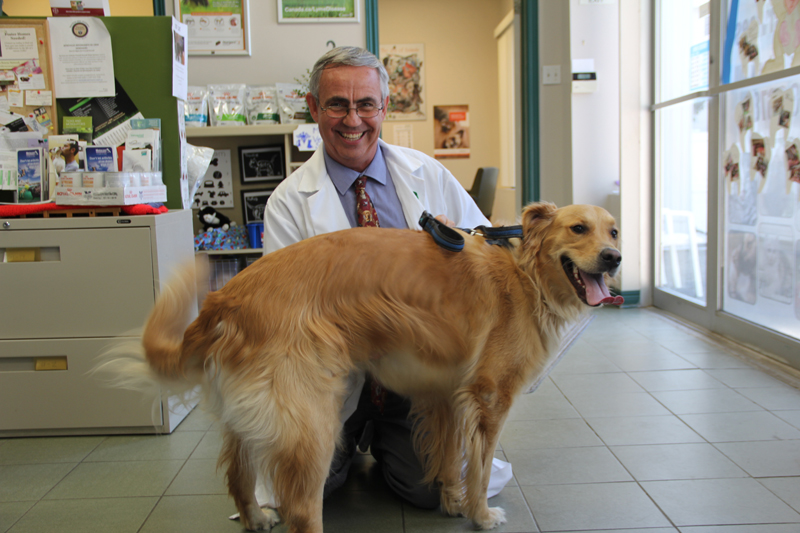 Doctor Brian MacCormick is seen here in his veterinary clinic in Vankleek Hill, with one of his patients, a golden retriever named “Miller.”

Local veterinarian Doctor Brian MacCormick is a bit tired this week – and with good reason. On Saturday, September 24 he cycled 100 kilometres to raise money for the Farley Foundation, which subsidizes the cost of veterinary care for pet owners who would otherwise be unable to afford the expense.

The conditions were cool and breezy on Saturday, making the conditions less than ideal. MacCormick told The Review that he was spurred onward by the phenomenal support he says he has received from the community. He managed to stay with the lead group and he completed his circuit in just under four hours.

“I still can’t get over the people who stopped by the office to say kind words of encouragement and to support the cause. They were incredibly supportive,” said MacCormick.

MacCormick says that in the 14 years that he has been in business, he has always supported the Farley Foundation, which he says has been instrumental in assisting some of his clients.

When he first decided to cycle for the Farley Foundation, MacCormick said that he was hesitant to set his goal of raising $1,000 for the foundation. He thought it was too high of a goal. After an article about his initiative appeared in The Review on September 21, he said that he was flooded by support. So far MacCormick has raised more than $2,500 for the cause. If you wish to donate to “Brian’s Ride for the Farley Foundation,” you can still do so by dropping off your donation and filling out the pledge sheets at MacCormick Veterinary Services, located at 5841 Highway 34, in Vankleek Hill. Pledges are being accepted until October 1.