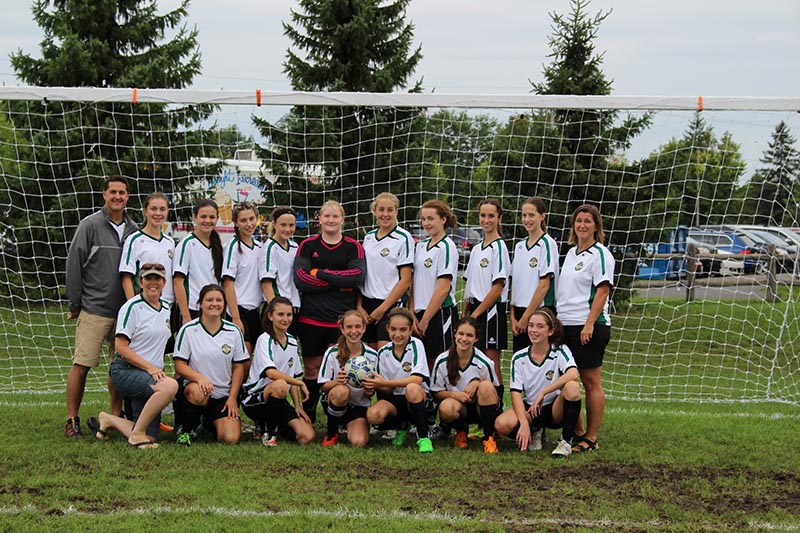 The Glengarry Hearts U16 girls soccer team draws players from across the region.

The Glengarry Hearts U14 girls capped a stellar championship season in Tier 1 in the Eastern Region Soccer League.  They won gold at the Regional Level in the Kickin’ in the Capital Tournament in Ottawa on September 10th and 11th.   On Saturday, Glengarry defeated Nepean Hotspurs L3 2-1, WOSC Warriors L3 2-0 before dropping a game to Gloucester Hornets  Impact L3 2-1.  In the semis, they defeated Nepean Hotspurs 2-1.  In the finals, the Hearts met Gloucester Hornets Impact and played to a 2-2 tie in regular time.  Glengarry found the back of the net on three penalty kicks, which was what they needed to take home gold.

Glengarry  U14G wrapped up first place in Tier 1 in Cumberland on Thursday, September 8th.  The Hearts only lost three games all season, one being in the semi finals of the Shield Cup against Ottawa City in a close game. Ottawa City placed second and Russell a close third in regular season ERSL play, followed by the Gloucester Hornets, West Ottawa and Cumberland.

Tryouts for the U15G Hearts for the 2017 season will take place on Sunday, September 25th and Saturday, October 1st in Alexandria.  At this time, it has not been determined whether next year’s team will compete in Tier 1 or enter the Regional Division of the ERSL.  The Glengarry Hearts teams are a part of the Glengarry Soccer League, for which the Hearts are grateful for the GSL’s continued support. For more information contact one of this year’s coaches: Michel Jeaurond, Carolyn Hurtubise or Anne MacDonald.