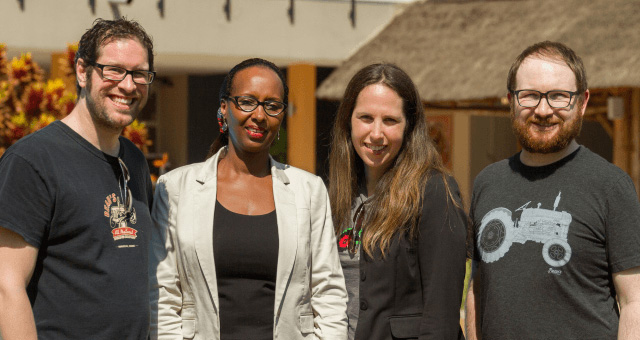 Beau’s is helping a female entrepreneur get a craft brewery up and running in Rwanda.

Eastern Ontario craft brewery Beau’s All Natural has announced that it has launched a project that will help a female entrepreneur start up a locally owned and operated craft brewery in the African republic of Rwanda. Beau’s will be providing financing, expertise, and hands-on employee training to the start-up brewery, and has sourced brewing equipment from industry suppliers. Beau’s is also launching a Kickstarter campaign for the Rwanda Craft Brewery Project that aims to raise $95,000 in donations over the next two months to fund the purchase of a bottling line.

At the heart of the Rwanda Craft Brewery Project is owner Josephine “Fina” Uwineza, a Rwandan woman who is no stranger to entrepreneurship. Uwineza is a successful restaurateur in Rwanda’s capital city of Kigali, where she opened the city’s first-ever Chinese restaurant. It became a go-to destination for tourists and the embassy crowd, and at one time, between her two popular restaurants, she had more than 50 staff employed.

More recently Uwineza shared a business idea with the CG Group’s Nancy Coldham, a Toronto-based consultant who has traveled to and worked extensively in Rwanda as a mentor to female entrepreneurs. The connection with Coldham sparked an idea for a Canadian-inspired craft brewery in Rwanda. Coldham reached out to the Ontario Craft Brewers association on behalf of Uwineza, who connected the women with Beau’s.

A team from Beau’s that included CEO Steve Beauchesne and CFO Tanya Beimers travelled to Rwanda this past spring to meet Uwineza in person and get a sense of the scope of the project, as well as some of the specific challenges associated with it. The team also met with officials from the City of Kigali as well as the Republic of Rwanda, and were offered a warm welcome and assistance to help get Uwineza’s Rwanda Craft Brewery Project off the ground.

“Meeting Fina with her passion and confidence, and then also seeing the support from the government, women’s groups and the community, we knew this was a project that we had to be a part of,” says Beimers. “We also knew when we returned from our initial trip to Rwanda that if the project was going to succeed, we were going to need to reach out to the craft brewing community for assistance, and to other generous Canadians to help too.”

Beauchesne and Beimers appealed to equipment suppliers on behalf of the Rwanda Craft Brewery Project to see if special funding considerations were a possibility. The request brought the donation of a brewhouse from BC-based Newlands Systems Inc. (NSI). Their COO, Christian Riemerschmid von der Heide, has experience brewing in Africa and will work with Beau’s brewmaster, Matthew O’Hara to help develop a beer recipe that will be a fit for the Rwandan market.

For their part, the Beau’s team has offered Uwineza financial support and consulting services, assistance with fundraising, and skills training for her and her future employees. Beau’s co-founder Steve Beauchesne is careful to point out that no profits from the new brewery will flow back to Beau’s or to the other partners. “We have always done what we can to help other craft breweries, be it lending supplies and equipment, or looking over business plans. This project is significantly more involved, but it’s rooted in the same principles of being open and willing to help.”

Some elements of Uwineza’s craft brewery are still in development, but her current plans are for a brewpub-style set-up in downtown Kigali that will offer onsite tastings as well as packaged beer to take home. The plan is also to use as many local ingredients as possible from nearby co-ops that provide employment for women who grow and harvest crops, as well provide health services and invest in their education and training.

The next steps of the Rwanda Craft Brewery Project require $95,000 in funding to purchase a bottling line, which is what the Kickstarter campaign is intended to achieve. The campaign is being managed by Beau’s and will run for 60 days. Beau’s is encouraging donations with different levels of rewards that range from project souvenirs such as stickers and enamel pins, to a chance to name an upcoming Beau’s beer and dinner for four in the home of Beau’s CEO Steve Beauchesne.

Uwineza has travelled to Canada to help kick off the Rwanda Craft Brewery Project Kickstarter campaign, as well as spend some time learning more about beer and brewing hands-on at Beau’s in Vankleek Hill. She will be a guest of honour at Beau’s Oktoberfest September 23 and 24, and will be speaking on a special panel about the project on the Saturday afternoon. Canadians who want to lend support to the Rwanda Craft Brewery Project can do so online for the next 60 days, at www.beaus.ca/rwanda.