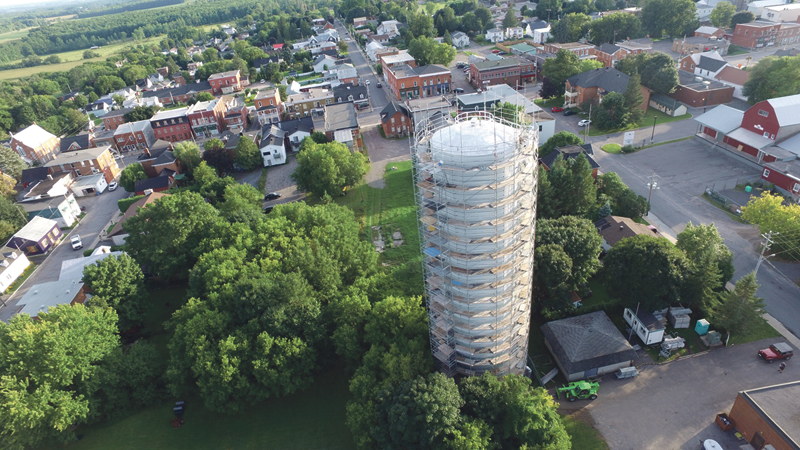 The Vankleek Hill Standpipe has been wrapped in scaffolding in preparation for a $600,000 paint job.

One of Vankleek Hill’s most prominent landmarks has been wrapped in scaffolding, in preparation for a $600,000 paint job.

The tower is located near Home Avenue and it provides drinking water to Vankleek Hill residents. It prominently displays the name of the village, which will be scraped off sometime in the next few weeks. When the project is completed, the text will be repainted in a similar style.

Two weeks ago crews began assembling more than ten tons of scaffolding around the exterior of the standpipe, which measures around 100 feet in height. The scaffolding is 17 levels high and is intended to enable work crews to scrape off the existing paint and apply a new epoxy finish.

Ian MacLeod of WSP Group is the construction administrator for the project. He explained that the existing paint has lead in it, which is why it is necessary to seal the scaffolding in tarps. This is intended to keep the lead paint from contaminating the surroundings. After it has been scraped off, the paint will be sent to a special facility for disposal. MacLeod said that it is quite common to find lead paint on older water towers.

“The standpipe was filled with water, so we couldn’t test the paint on the interior, but we suspect it was the same type that was used on the exterior,” said MacLeod.

He estimates that when the standpipe is full, it holds approximately 2,400 cubic metres of water. The tower is ten-metres in diameter.

In order for construction workers to work on the tower, the standpipe had to be drained. It was also necessary to reconfigure the water system for the duration of the project.

Why do we even need the standpipe? The water tower is used to make sure Vankeek Hill has a supply of drinking water.

“One of the purposes of the standpipe is security. If you have a break at the main, there would be no water (without the backup water in the standpipe). It also ensures high volume of water for fire prevention and for high water consumption periods,” said MacLeod.

If there is a high demand for water during the period when the standpipe is under construction, MacLeod warns that water pressure may drop. Areas like sections of High Street that already have low water pressure, may be more affected than others.

“Fortunately, its taking place during the later part of the year when water consumption is a bit lower than in summer months,” said MacLeod.

Champlain Township Public Works Director James McMahon is in charge of ensuring that residents have access to water. He said that a water tanker and an extra pumping system will be on site to ensure that there will be water at all times.

Sandblasting off the old paint is expected to take a little more than a week, at which point crews will begin to apply the new epoxy finish. They will apply two layers of epoxy to the exterior of the tower and three layers to the interior. A hanging scaffolding system, similar to what it used by window washers, will be erected to facilitate work on the interior of the tower. Construction lights will also be used to illuminate the dim interior, which does not typically accommodate visitors.

A mini submersible with an attached camera was dropped in the standpipe three years ago to aid with the visual inspection.

“We found some spotting on the interior, specifically rust spots around the seams and welds. We want to ensure the integrity of the structure, which is why we went forward with the project,” said McMahon.