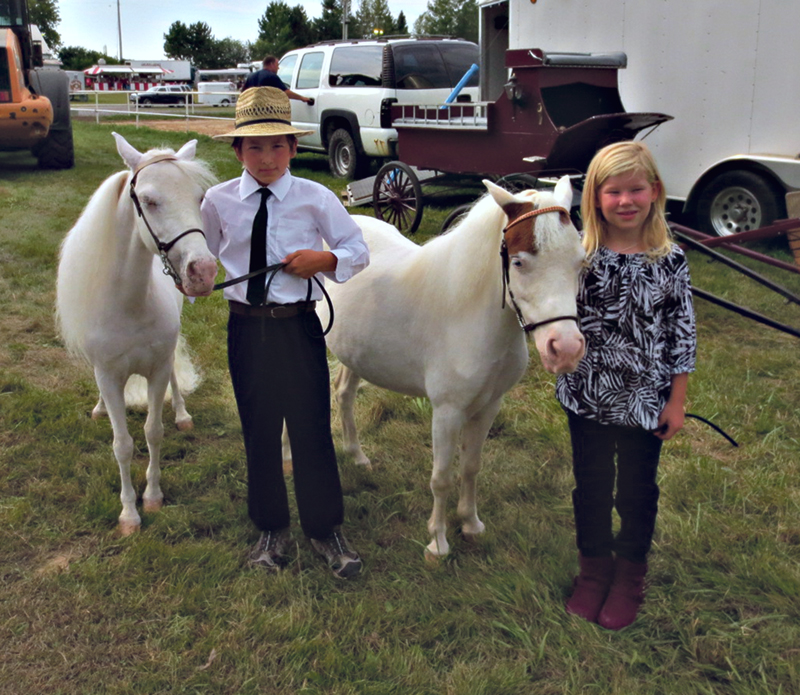 This pair of miniature horses and their pint-sized handlers were an adorable attraction at the 149th Riceville Fair.

The Riceville Fair is one of the smallest fairs in Eastern Ontario, but it may also be the friendliest.

Riceville bills itself as “The Country Fair with Family Flair” and it delivers on its promise. The fair opened last Friday with little fanfare but lots of pickup trucks. During the day, it was quiet on the grounds. The exhibition hall was filled to overflowing with handicraft entries, plants, baked goods and vegetables. An entire wall was lined with corn stalks. This isn’t surprising, given the strong agricultural roots of the area, where cash crops like corn are a growing commodity.

Riceville Agricultural Society Secretary Valerie Reid spent most of Friday preparing for a turkey dinner to be held the following day. On Friday evening she was busy washing lots and lots of cucumbers. Most of the vegetables were provided by a local farmer, who usually sells his produce at the markets in Ottawa. In addition to supplying free vegetables for the meal, Reid said he also sponsored a few of the agricultural classes.

Riceville is a community where people work together. Nearly all of the local families support the fair in one way or another. The fair board is itself a family affair, with multiple generations of families represented on the board. Reid said that one of the challenges facing Riceville Fair is attracting youth. The traditional hitch classes, line classes, dairy shows and equestrian events are attractive to families and older demographics, but she said they simply aren’t attracting enough of the 18-to-35-year-olds.

In order to attract new crowds and liven up the entertainment, numerous events were added this year. It seems to have worked. The grounds were filled on Friday and Saturday night for the new attractions.

While Reid was washing cucumbers on Friday evening as the sun was setting, dozens of ATV riders were lining up their vehicles in preparation for the ATV Pull for Dad, which raised money for prostate cancer research.

The Nation Township Fire Chief Tobias Hovey, who is also a Riceville Fair director, was in charge of the ATV show. It had a few glitches, which he said will be worked out if the event returns next year, but he said he was pleased with the show. Similar to horse pulls and truck pulls, the goal of the ATV pull was to see whose machine in each weight class could pull the most weight. The event got off to a comedic start when the first two competitors failed to budge the weight by so much as an inch. Bigger machines were brought in to launch the show, dragging the weights to the far end of the ring and showing that muscle is mightier than weight.

ATVs were the Friday night theme and included an ATV stunt show by Les Hatz and his crew at Erupshun Industries. Driving over jumps they flew through the air doing some impressive aerial stunts.

The cosy confines of the fairgrounds meant that you could watch both the ATV show and the pull from either the mini grandstands or from the entertainment area where food and drinks were served and where the band “Twisted Kilt” was performing a medley of Celtic and classic rock tunes.

The food at the “locavore” market was delicious. It included local craft beer, ribs, crafts and more. If more traditional fair food was what you were craving, there were also mini donuts and fair favourites from Splendron Farms.

On Saturday, there were English and western horse shows and numerous beef shows, which were held during the day. There were inflatable games and crafts in the children’s area and music by Bill Connors, Roger Hamelin and Uncle George.

The fairgrounds filled up Saturday night for the Show and Shine judging and the street legal truck pull. There was a turkey supper provided by the RAS Family and music was performed by “Casual Affairs.”

Sunday’s activities began with an RAS brunch, followed by light and heavy horse shows and the Prescott County 4-H Achievement Day. There was a firefighter competition and an antique tractor pull, as well as a recreational horseshoe tournament. Music was performed by “Kilts, Riffs and Spurs.”

The Riceville Fair will be celebrating its 150th anniversary next year and it’s sure to impress with even more family events and a few anniversary surprises.